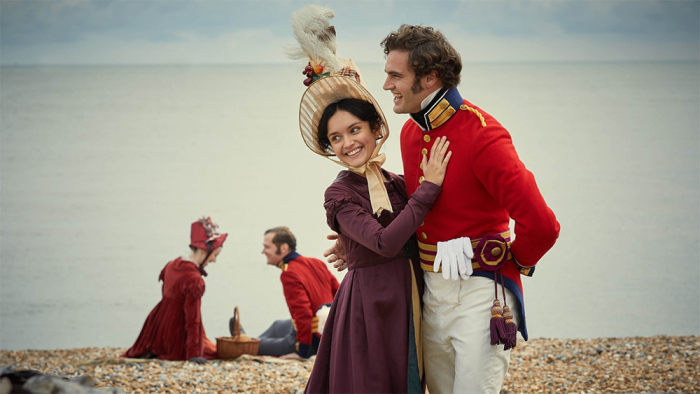 There’s something comforting about the predictability of a period piece novel adaptation in the Masterpiece Theater tradition. Knowing the story, or even just the rhythms of the genre, there are rarely many surprises. The women will toss off witticisms and cry careful, pretty tears; the men will steel their jaws and declare their love, ideally after reluctantly falling for a woman they hadn’t considered before. There will be romance, heartbreak, births, deaths. Even when it’s not a great adaptation, it’s at least familiar, and that can go a long way.

“Vanity Fair” is counting on just such leniency. It’s neither terrible nor amazing, but at the very least, it’s efficient.

In seven episodes spanning years of social climbing, devastating warfare, and undulating class dynamics, this latest version of William Thackeray’s “Vanity Fair” enlists a game cast to follow Becky Sharp (Olivia Cooke), an enterprising woman constantly trying to better her circumstances by any means necessary, and all those lucky (or unlucky) enough to cross paths with her. Claudia Jessie does her best to bring pathos to the largely thankless role of Becky’s meek friend Amelia, as does  the otherwise charismatic Johnny Flynn (“Lovesick”) as Dobbin, the even meeker soldier who holds an eternal torch for her. Occasionally, actors like Frances de la Tour (as a rich, no nonsense matriarch) and Anthony Head (as a suggestive nobleman with a wicked bite) get to show what they’re made of with their welcome, scenery-chewing turns.

But the heart of “Vanity Fair” is and always has been Becky. In every version of her story, she’s pretty and talented, perceptive and cunning, magnetic and flirtatious. She’s more than happy to use any of those attributes for monetary gain, and resents any implication that she shouldn’t (especially if it means she gets to take advantage of a less intelligent man). If she were a real person, she’d likely get celebrated in a splashy magazine profile as The Scammer of Our Time.

Cooke is fun in the role, particularly when she gets to embrace Becky’s sharper edges. But even when director James Strong gives her the room to fully tackle the role — such as when she, on occasion, flicks her eyes up to make contact with the camera as a sly wink when she’s getting the better of someone — Cooke’s Becky is otherwise bound to a routine production without great ambitions of being more. Even the bizarrely spooky opening credits (starring Michael Palin as a fourth wall-breaking Thackery) or anachronistic song choices closing out each episode feel like halfhearted stabs at innovation, since most everything in between sticks to such a basic script. Then again, maybe those attempts at distinctive flourishes feel so out of place because they don’t belong there at all in a series built to please fans of its genre, and nothing more, nothing less.