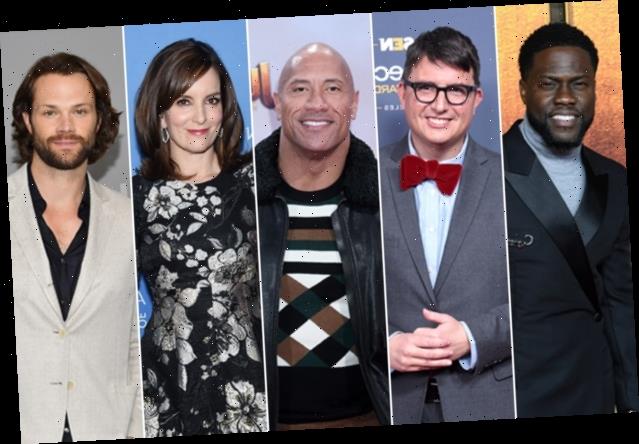 Here’s the list of ABC, CBS, FOX, CW and NBC projects in contention to go to series

MY VILLAGE
Writer(s): Kari Lizer
Studio: Sony Pictures Television, ABC Studios
Logline: An empty-nester mom wonders how she ended up alone while her children live their best lives thousands of miles away. She decides her place is with her family and as she reinserts herself into their lives, her kids realize they might actually need her more than they thought.(Multi-camera)

PROSPECT
Writer(s): Sherry Bilsing-Graham, Ellen Kreamer
Director: Randall Einhorn
Studio: ABC Studios
Logline: A comedic western with a feminist twist: an idealistic young woman moves to the frontier to be a schoolteacher, but her ideals are quickly tested when she learns that her students are rowdy ranch hands, not children. (Single camera)

THE BRIDES
Writer(s): Roberto Aguirre-Sacasa
Producer(s): Greg Berlanti, Sarah Schechter
Director: Maggie Kiley
Studio: ABC Studios, Warner Bros. Television, Berlanti Productions
Logline: A sexy contemporary reimagining of “Dracula,” is a family drama with a trio of powerful female leads at its heart. With strong horror elements, “The Brides” is a vampire soap about empowered, immortal women and the things they do to maintain wealth, prestige, legacy — and their nontraditional family.

REBEL
Writer(s): Krista Vernoff
Producer(s): Davis Entertainment, Alexandre Schmitt, Erin Brockovich
Studio: ABC Studios/Sony Pictures Television
Logline: “Rebel” is inspired by the life of Erin Brockovich today. Annie “Rebel” Bello is a blue collar legal advocate without a law degree. A funny, messy, brilliant and fearless woman who cares desperately about the causes she fights for and the people she loves. When Rebel applies herself to a fight she believes in, she will win at almost any cost.
Cast: Katey Sagal

THIRTYSOMETHING(ELSE)
Writer(s): Marshall Herskovitz, Edward Zwick
Director: Edward Zwick
Studio: ABC Studios, MGM Television
Logline: A sequel to the groundbreaking series “thirtysomething,” which follows an ensemble of new faces playing the grown-up, 30-something children of the original cast. Apparently, raising children (even grown children) never ends, but who could have known how hard it would be for them to raise their parents?
Cast: Ken Olin, Mel Harris, Timothy Busfield, Patty Wettig

B POSITIVE
Writer(s): Marco Pennette
Producer(s): Chuck Lorre
Studio: Warner Bros. Television, Chuck Lorre Productions
Logline: Faced with finding a kidney donor, newly divorced dad Drew is at the end of his rope when he runs into Gina, a rough-around-the edges woman from his past who volunteers her own. Together they form an unlikely bond and begin a journey that will change both of their lives. (Multi-camera)

WE THE JURY
Writer(s): Dana Klein and Stephanie Darrow
Producer(s): James Acaster, Kenton Allen, Matthew Justice
Studio: CBS Television Studios
Logline: A group of jurors are sequestered together until they all agree on a verdict…and they can’t even agree on lunch. (Hybrid)

CLARICE — Series Commitment
Writer(s): Alex Kurtzman, Jenny Lumet
Producer(s): Heather Kadin, Aaron Baiers
Studio: MGM Television, CBS Television Studios, Secret Hideout
Logline: It’s 1993, a year after the events of “The Silence of the Lambs.” CLARICE is a deep dive into the untold personal story of Clarice Starling as she returns to the field to pursue serial murderers and sexual predators while navigating the high stakes political world of Washington, D.C.

WALKER — Series Order
Writer(s): Anna Fricke
Producer(s): Dan Lin, Lindsay Liberatore, Jared Padalecki
Studio: CBS Television Studios, Rideback.
Logline: A reimagining of the long-running series “Walker, Texas Ranger.” Centers on Cordell Walker, a widower and father of two with his own moral code, who returns home to Austin after being undercover for two years, only to discover there’s harder work to be done at home. He’ll attempt to reconnect with his children, navigate clashes with his family, and find unexpected common ground with his new partner (one of the first women in Texas Rangers’ history), while growing increasingly suspicious about the circumstances surrounding his wife’s death.
Cast: Jared Padalecki

UNTITLED THE 100 PREQUEL — Backdoor Pilot Production Order
Writer(s): Jason Rothenberg
Producer(s): Leslie Morgenstein, Gina Girolamo
Studio: Alloy Entertainment, Warner Bros. Television, CBS Television Studios
Logline: Set 97 years before the events of the original series, this project — which is currently being developed as a planted spinoff and will air as an episode of THE 100’s final season — starts with the end of the world, a nuclear apocalypse that wipes out most of the human population on Earth. The epic adventure follows a band of survivors on the ground as they learn to cope in a dangerous world while fighting to create a new and better society from the ashes of what came before.

CARLA — Series Commitment
Writer(s): Darlene Hunt
Producer(s): Jim Parsons, Todd Spiewak, Angie Stephenson, Miranda Hart, Eric Norsoph, Mackenzie Gabriel-Vaught, Mayim Bialik
Studio: Warner Bros. Television, FOX Entertainment, That’s Wonderful Productions, Sad Clown Productions, BBC Studios
Logline: Carla is a 39-year-old woman who struggles every day against society and her mother to prove that you CANNOT have everything you want — and still be happy. Which is why she spent the money her parents set aside for her wedding to open a Cat Café in Louisville, KY. Based on the BBC UK original seriesMiranda, created by Miranda Hart. (Multi-camera)
Cast: Mayim Bialik

THE CLEANING LADY
Writer(s): Miranda Kwok
Producer(s): Shay Mitchell, Melissa Carter
Studio: Warner Bros Television, FOX Entertainment
Logline: A darkly aspirational character drama about a whip-smart doctor who comes to the U.S. for a medical treatment to save her ailing son. But when the system fails and pushes her into hiding, she refuses to be beaten down and marginalized. Instead, she becomes a cleaning lady for the mob and starts playing the game by her own rules. Based on the original Argentine series

CRAZY FOR YOU
Writer(s): Rachele Lynn
Producer(s): Lorne Michaels, Seth Meyers, Mike Shoemaker
Studio(s): Universal Television, Broadway Video, Sethmaker Shoemeyers Productions
Logline: Daisy, with her life stalling, re-enters the dating scene only to discover that while she was out of the game, the game sort of, totally, completely changed. Realizing she is a bit rusty at being “normal” and “appealing” on first dates, she’ll need the support of her friends as she strives to succeed while being her true self in today’s quick-to-dismiss dating culture. (Single camera)

NIGHT SCHOOL
Writer(s): Chris Moynihan
Producer(s): Kevin Hart, Will Packer, Malcolm Lee
Studio: Universal Television, Hartbeat Productions, Will Packer Productions, Bicycle Path Productions
Logline: An adaptation of the 2018 film, “Night School” centers on a unique mix of adults at a night school GED prep class who unexpectedly bond over their shared experience and find themselves helping each other both inside and outside of the classroom. (Multi-camera)

SOMEONE OUT THERE
Writer(s): Matt Hubbard, Josh Siegal, Dylan Morgan
Producer(s): Emiliano Calemzuk, Gonzalo Sagardia, Javier Veiga
Studio: Universal Television
Logline: A romantic comedy about two set-in-their-ways adults who are challenged by very unexpected strangers to become the best versions of themselves in order to find love and possibly each other. Based on the format “Pequeñas Coincidencias,” created by Javier Veiga. (Multi-camera)

UNTITLED TINA FEY/ROBERT CARLOCK — Series Order
Writer(s): Tina Fey, Robert Carlock
Producer(s): Jeff Richmond, David Miner, Eric Gurian
Studio: Universal Television, 3 Arts Entertainment, Little Stranger
Logline: A wealthy businessman runs for mayor of Los Angeles for all the wrong reasons. Once he wins he has to figure out what he stands for, gain the respect of his staff and connect with his teenage daughter, all while humanely controlling the coyote population. (Single camera)
Cast: Ted Danson, Holly Hunter, Bobby Moynihan

ECHO
Writer(s): JJ Bailey
Producer(s): John Davis, John Fox
Studio: Universal Television, Davis Entertainment
Logline: A high-concept, genre procedural revolving around a team of investigators who solve the highest-profile crimes by sending our heroes 36 hours into the past … in the body of the victim. They assume the victim’s identity and must race against time to prevent the crime before it happens.

LA BREA
Writer(s): David Appelbaum
Producer(s): Avi Nir, Alon Shtruzman, Peter Traugott, Rachel Kaplan, Ken Woodruff
Studio: Universal Television, Keshet Studios
Logline: When a massive sinkhole mysteriously opens in Los Angeles, it tears a family in half, separating mother and son from father and daughter. When part of the family find themselves in an unexplainable primeval world, alongside a disparate group of strangers, they must work to survive and uncover the mystery of where they are and if there is a way back home.

ORDINARY JOE
Writer(s): Russel Friend, Garrett Lerner
Producer(s): Matt Reeves, Adam Kassan, Rafi Crohn, Howard Klein
Studio: 20th Century Fox Television, 6th & Idaho, 3Arts Entertainment
Logline: Explores the three parallel lives of the show’s main character after he makes a pivotal choice at a crossroads in his life. The series asks the question of how different life might look if you made your decision based on love, loyalty or passion.