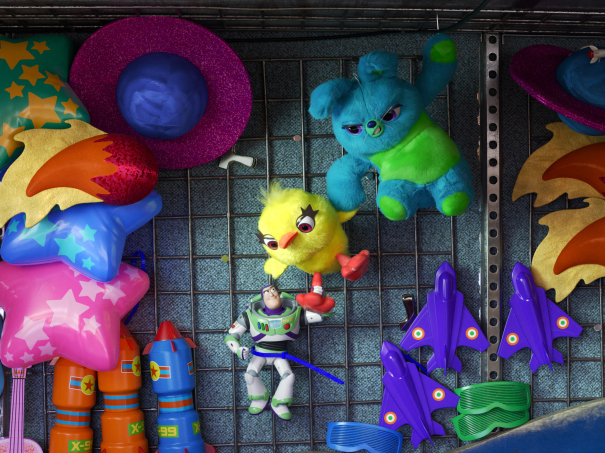 Leave it to Disney to have the last word in the Super Bowl. Right when the Patriots defeated the Rams in what could probably be the blandest Super Bowl, a new sneak peek at Toy Story 4 came in to add some fun and excitement to the mix.

The short, yet enjoyable Super Bowl spot has Woody (Tom Hanks) and Bo Peep (Annie Potts) searching for Buzz Lightyear (Tim Allen) in what seems like a new town for them. As they enjoy a local carnival, it turns out he is trapped as a prize at one of the games and he is being taunted by new characters Ducky and Bunny played by Keegan-Michael Key and Jordan Peele respectively.

Here’s the logline for the new installment of Toy Story 4: Woody has always been confident about his place in the world, and that his priority is taking care of his kid, whether that’s Andy or Bonnie. So when Bonnie’s beloved new craft-project-turned-toy, Forky (voice of Tony Hale), declares himself as “trash” and not a toy, Woody takes it upon himself to show Forky why he should embrace being a toy. But when Bonnie takes the whole gang on her family’s road trip excursion, Woody ends up on an unexpected detour that includes a reunion with his long-lost friend Bo Peep. After years of being on her own, Bo’s adventurous spirit and life on the road belie her delicate porcelain exterior. As Woody and Bo realize they’re worlds apart when it comes to life as a toy, they soon come to find that’s the least of their worries.