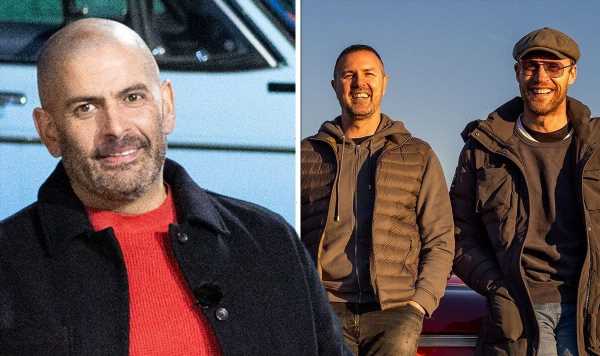 Motor expert Chris Harris was joined by Paddy McGuinness and Freddie Flintoff in 2019 as the trio formed the latest Top Gear presenter line-up. Although racing fanatic Chris is the more knowledgeable out of the three hosts, he told Express.co.uk he feels he’s “terrible” at the studio aspect of the role.

Chris was asked if he ever purposely holds back knowledge from Paddy and Freddie when the trio embark on a challenge.

He replied: “Absolutely every single time you have to, don’t you?

“I can remember the first time we recorded a studio and I know nothing about the studio I’m terrible at it, still am.

“And in our final practice in my head I’ve got a little gag and I delivered it to Paddy or to Freddie.”

“Paddy immediately said, ‘You absolute amateur you should have saved that for the actual recording. Now we know it’s coming we’ll hammer you me,” he continued.

“So it’s a trick, [Paddy] knew he had his skill, but he kept it back from me and I’ll always do the same a bit.

“I wouldn’t do it to the point where it’s dangerous but I’ve got to have some chance.

“They’re getting quite good at this driving fast lark so I need all the help I can get really.”

In the first episode of the current series, the presenters tried their hand at donk-car drag racing.

Speaking about the experience, Chris and Freddie opened up about their nerves before the race.

However, Chris cheekily withheld some information about the mechanics of the vehicles.

“I wouldn’t want to crash in one of those,” Chris admitted before detailing the mechanics behind racing.

“Drag racing is all about having a big fleshy tire so you’ve got a little wheel and the tires got loads of sidewall so you get that heated up, then when you accelerate away the tire compresses and it acts like a spring, it’s full of suspension.”

“The background of these races is that they have these massive wheels,” Chris continued.

“They’ve got these huge big silver chrome wheels and a tiny little tire.

“So when you accelerate there’s no compliance at all the thing either goes or it stops.”

Interrupting, Freddie joked: “Why didn’t you tell me this at the time?”

Meanwhile, in Sunday’s instalment, the presenters study to get their HGV licences and become lorry drivers.

In true Top Gear style, Paddy, Freddie and Chris then head off on a road trip.

Top Gear continues on BBC One on Sunday at 8pm.

Tiny studio flat with bed wedged into the kitchen could be yours for £80,000
World News