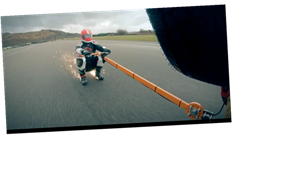 Top Gear viewers were concerned the show went a step too far with Sunday night’s stunt, which saw the three presenters towed behind their cars.

Freddie Flintoff, Paddy McGuinness and Chris Harris all donned protective metal plates on the bottom of their shoes, and held on to the back of a tow hitch.

The Stig then commandeered each of their chosen off-road vehicles at whatever speed the two remaining presenters called over the radio.

Sparks flew off the soles of their boots as the Stig raced along the track.

But viewers were baffled as to how the stunt passed health and safety regulations.

"Being dragged behind a vehicle, can see the first death on #TopGear just around the corner" one viewer wrote on Twitter.

Another added: "Me to kids ‘don’t EVER try to copy that’!"

And someone else commented: “How on earth do #TopGear get away with these stunts from a Health and Safety point of view?”

A fifth viewer said: "I actually can not believe this passed health & safety".

The eye-watering scenes were even branded "insensitive" by one disgruntled viewer.

But other fans were desperate to have a go themselves, with one writing: "Maaaan, I’d love to do this! Just gotta be careful you don’t set your a*** on fire, as well as your feet! I bet it’s bloody fun, though!"

And someone else said: "Now I desperately want to try that #TopGear!"

"Massive gonads on the lads" another wrote, clearly impressed.

The presenters themselves weren’t so sure, however.

As soon as he finished his run, Chris groaned: "I never want to do that again, never ever ever. That was horrible."

"Things I never want to do again!" Chris remarked.

But Freddie had other ideas.

As he left the run, he said he had "no idea" how fast he was going.

And upon returning to the others, he admitted: "I’d quite like to get to 100 [MPH], but I’ll save it for another day."

Chris told him, "What you need is a lobotomy."

Each of the presenters had to fall and roll as the vehicle came to a stop, but thankfully emerged unharmed.