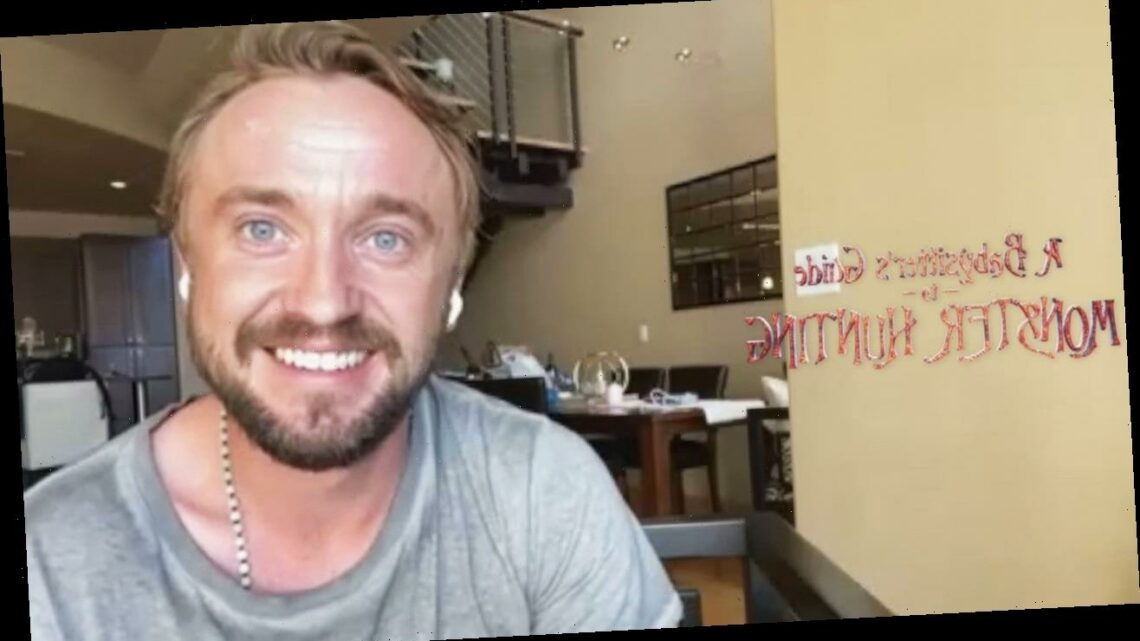 Tom Felton is “highly flattered” that people continue to thirst after his iconic Harry Potter character Draco Malfoy, and especially loves fans putting their own spin on the now-viral #DracoTok trend.

“It’s sort of taken a life of its own now,” Felton told ET’s Ash Crossan about DracoTok, which sees fans elaborately insert themselves into Harry Potter scenes opposite Malfoy on TikTok. “But I’m having so much fun with it because if you go to the hashtag DracoTok you see all of these collaborative videos. We’re no longer retweeting or commenting, they’re actually taking things that I’ve done and putting their own spin on it. And then I can see that and put a spin on their stuff. It’s turning into a whole monster of its own. But I’m really, really enjoying it. So yeah, I’m going to keep the DracoTokers happy for as long as I can.”

Fans first saw Felton take on his Malfoy role in 2001’s Harry Potter and the Sorcerer’s Stone. Almost 19 years later, he still thinks it’s “awesome” that a character that wasn’t “particularly the most popular” continues to be recognized.

“He’s great. He has so many layers, he’s misunderstood, he’s also a bit of a git,” Felton said of his past character. “He needs a hug really. I think maybe people feel sorry for him, he needs a bit of affection. Either way, I’m highly flattered and intend to do my best to satisfy that desire.”

Muggles , I’m looking to duet……let’s see what you’ve got 🐍 #dracotok

Muggles , I’m looking to duet……let’s see what you’ve got 🐍 #dracotok

Expect to, hopefully, see more of Felton’s Malfoy, as he teased that he’s trying to get a Harry Potter cast reunion set up. The actor shared that he keeps in touch with a lot of his former co-stars and has something up his sleeve for the first film’s anniversary next month.

“I saw the Weasley twins the other day. We went out to play some golf. Always chatting with a lot of the other guys on WhatsApp and staying in touch with them and making sure everything’s alright,” he shared. “It’s been nice because it’s the 19th-year anniversary on Nov. 14, so I’m planning some sort of digital celebration…I’m trying to wrangle all the oldies back together again to celebrate the achievement really.”

While fans anxiously wait for a possible HP reunion, Felton takes on a new villainous role as Grand Guignol in A Babysitter’s Guide to Monster Hunting. The film follows a high school freshman who reluctantly agrees to babysit on Halloween and is recruited into a secret society of babysitters who protect kids with special powers from monsters.

“I had so much fun doing it really. They kind of gave me quite a lot of creative licenses to sort of go as crazy as I wanted to,” he said of his rock star-inspired character and his look. “As soon as I started getting trinkets tied in my hair and bags of children teeth attached to my belt, I was loving it and it was impossible to be Tom, really, when you’re in the outfit. There’s no walking around, you’re sort of sauntering everywhere and dancing and gliding around the set.”

Felton loves taking on villainous roles, making them his own and “being someone so different from myself.”

“And these guys, yeah they seem villainous compared to the other characters, but they don’t think they’re the villains,” he explained of his latest character and film. “They’re just doing the thing they want to do, what they think is right. You take such a joy in being the master of menace and the newbie of nightmares, et cetera.”

“And the further they are away from Tom the muggle the better,” he added. “So I just got to get the chance to let go and be a bit of a nutter. And yes, I suppose when it comes to scaring the kids, that was really down to the fabulous hair and makeup team and the wardrobe and so forth because I felt like a rock star, a demon rock star just sauntering around. So it was a lot of fun.”

A Babysitter’s Guide to Monster Hunting is now streaming on Netflix.