Home » TV & Movies » ‘Tom and Jerry’ Review: Classic Cartoon Gets an Adaptation That Doesn’t Belong in Any Generation 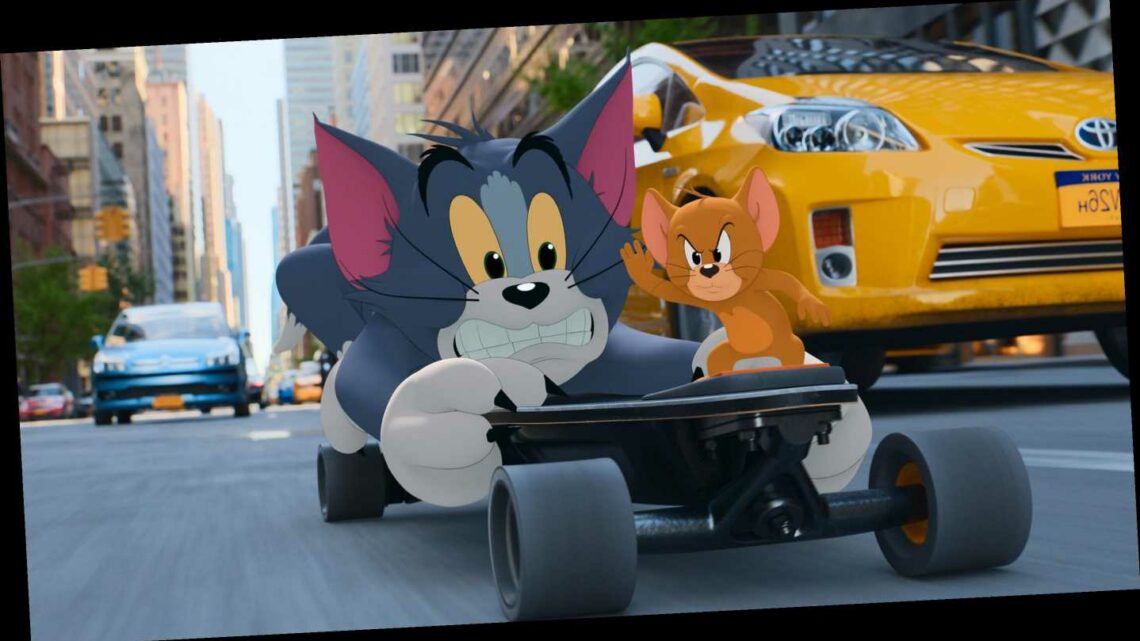 ‘Tom and Jerry’ Review: Classic Cartoon Gets an Adaptation That Doesn’t Belong in Any Generation

At least “Tom and Jerry” never pretends to be something that it isn’t. From the opening sounds of the new feature-length adaptation of the classic cartoon, it’s readily apparent what audiences are in for. The hook from the beginning of A Tribe Called Quest’s “Can I Kick It?” plays over the baffling new Warner Bros. water tower intro and before you know it, an animated pigeon is lip-syncing to Q-Tip.

There’s little in the following hour and forty minutes that shows any more sense of purpose, a hodgepodge of story and sight gags that goes together about as well as its attempts at combining live action and animation. It’s a “Tom and Jerry” movie that, for some reason, opts to focus on a pair of fictional Instagram celebrities and the ins and outs of hotel administration, whether or not the computer-generated cat and mouse implied by the title happen to be involved.

A significant portion of the movie revolves around Kayla (Chloe Grace Moretz), a character who successfully swindles her way into a job at a swanky New York hotel mere days before the wedding of Ben (Colin Jost) and Preeta (Pallavi Sharda), the social event of the season. Going off absolutely nothing other than a pilfered resume and thirty seconds of small talk, hotel manager Mr. Dubros (Rob Delaney) hires her to the temp staff, under the supervision (and objections) of events manager Terence (Michael Peña). Terence quickly cools on Kayla for the same reason that Tom and Jerry are constantly feuding: just because.

Before long, the runup to Ben and Preeta’s wedding collides headlong with the latest round of destructive Tom-Jerry bouts, endangering the psychological well-being of everyone involved and giving Kayla a growing, disproportionate list of responsibilities. Not only are Kayla and company unphased by the presence of animated animals, they eventually join forces in a “Toontown but without the prejudice and rigid social hierarchy” kind of way. This all happens without giving Tom or Jerry a speaking voice, as 1993’s “Tom and Jerry: The Movie” did.

Despite this confounding packaging, “Tom and Jerry” isn’t completely devoid of its animation history DNA. Maybe the one element that keeps this movie from being an entirely wasted effort is that amidst the bizarre machinations of luxury hotel event managing, there’s some room for good old fashioned, one-on-one comic mayhem. Tom and Jerry trash duvet covers, smash up lounge pianos, and draw the unwanted attention of the classic bulldog antagonist Spike. (When not rabies-level foaming on the camera or defecating on the streets of New York City, he’s voiced by Bobby Cannavale at his most, well, cartoonish).

It’s when this version of “Tom and Jerry” starts trying to squeeze those humans into this setup that both worlds feel smashed together and equally lifeless. (In both the at-times-offputting animation style and its relative place/quality in an established, beloved tradition, this should pair nicely on HBO Max with “Earwig and the Witch.”) 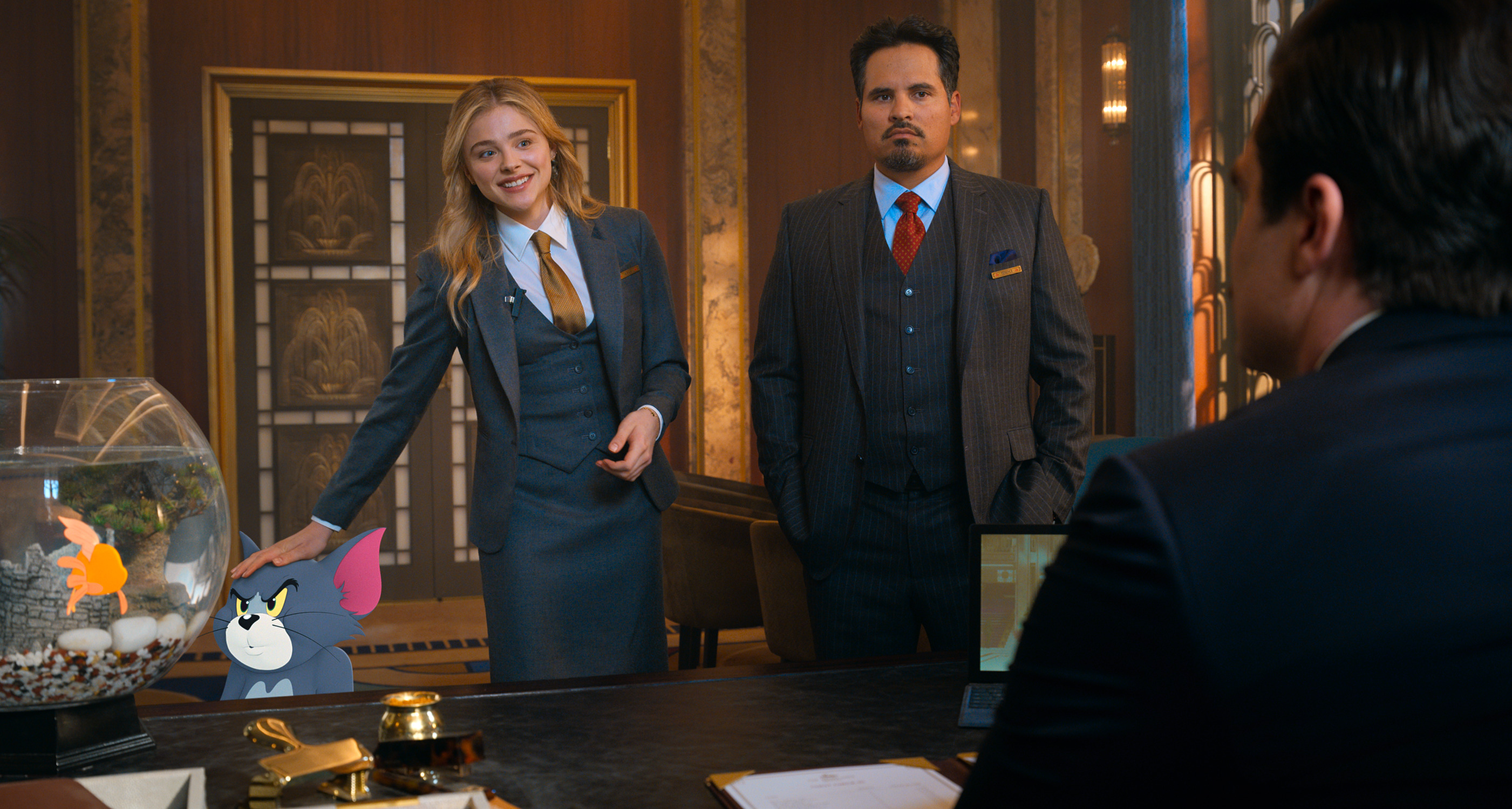 The on-screen actors may well have had fun filming for a few weeks inside a hotel, pretending to mess with drones and flinging themselves around as if tormented by the surprising number of non-feline, non-rodent animated creatures there end up being in this movie. Moretz, Delaney, and Peña manage to do more with a perfunctory, nonsensical setup than the average trio could have. The movie’s opening act plays like someone shoehorned Tom and Jerry into an existing spec script about a con artist who accidentally finds her way into wedding planner job. On the spectrum of repurposing to fit into an existing franchise, this would be pretty far from “Die Hard with a Vengeance,” but the film does have the good sense to bring in charismatic professionals who know how take advantage of the minimal breathing room they’re given.

“Tom and Jerry” is ostensibly a comedy, though the throw-spaghetti-at-the-wall approach of Kevin Costello’s script rarely yields any jokes that stick. There’s a weird attempt at industry-based intellectual property humor that pops up in the movie’s first few lines that never really yields anything comparable after. You probably already know what hand gesture Jerry gives Tom as the pair stare each other down before a big fight. And what 2021 kid’s movie is complete without a Marty Feldman reference?

This is all before the obligatory smattering of studio-noted zeitgeist nods that make you wonder whether this was a project that’s been in the can for a few years already and is only just coming out now. (Drake! Poop emoji! Selfies! A DJ at a turntable! Ken Jeong yelling at people!) Director Tim Story is an industry vet with plenty of prior experience adapting preexisting properties into film projects. In the absence of any personal directorial touch, though, this becomes a big-screen vehicle for two characters who are so much better suited for shorts that this movie often has to come up with ways to jettison them from the rest of the plot.

There’s also the curious case of Jost, who seems to have found the perfect project in his continued career-long treatise on the nature of privilege. The movie isn’t asking him to do much (except try to sell a truly awful joke about Spike while Ben and Preeta check into the hotel). It is extremely telling, though, that he ends up as the center of a romantic subplot where his chest hair gets only slightly less screen time and agency than his fiancée does. It’s instantly, abundantly clear that Ben is the kind of character who would say in a job interview or a first date that his biggest weakness is that he cares too much, and that’s before multiple other characters in the movie basically make that precise argument for him.

“Tom and Jerry” manages to prove that it’s possible to be stretched thin and overstuffed at the same time. It’s a specially calibrated kind of chaos not so much meant to be a movie but something designed to hold the attention of a child. (Sympathies in advance to the scores of parents who’ll be introduced to their kids’ endless impressions of Peña shouting “I’m scooping the poop!”) There are even a handful of moments that seem to be conceived specifically for a 3-D theatrical release it won’t really get. In a way, that ends up being about as indicative of the movie as you can get for the movie as a whole, one that’s as harmless as it is pointless.

A Warner Bros. release, “Tom and Jerry” is now in select theaters and available to stream on HBO Max.

As new movies open in theaters during the COVID-19 pandemic, IndieWire will continue to review them whenever possible. We encourage readers to follow the safety precautions provided by CDC and health authorities. Additionally, our coverage will provide alternative viewing options whenever they are available.

Peaky Blinders: Who was the woman in Mosley’s dressing room? The clues you missed