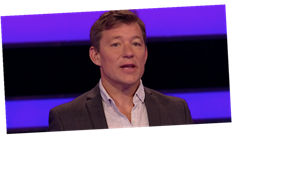 Tipping Point viewers were distracted from Wednesday's edition of the ITV quiz show as pub landlady Liz tried her luck to win some big money.

Host Ben Shephard welcomed four players to the famous television studio and they battled it out to win the highly sought after cash prizes.

David, Lauren, Kenny and Liz answered a series of questions to win turns on an arcade-style machine.

Dropping tokens down a choice of four chutes, they each hoped to knock piles of the counters off a moving shelve – the more they collected, the greater the prize fund.

Ben, 45, asked the contestants a series of questions and viewers quickly pointed out Liz's "annoying" habit during the first round of the competition.

Taking to Twitter, one fan moaned: "Liz stop saying 'I think' before the bloody answer!"

Another added: "I think Liz likes saying 'I think' too much."

A third person posted: "Oh f*** off Liz, just give the goddamn answer!"

While a fourth viewer said: "Why does Liz keep answering the questions with 'I think it is…' and 'it’s got to be..'?."

"Does Liz have to say 'I think it's..' before every answer?", a fifth social media user wrote.

A sixth quipped: "Protest and stop answering questions with 'I think it's'. It's f***ing annoying."

Liz only managed to make it as far as the second round before she was sent packing.

Police officer David was the lucky player who made it through to the final round.

The copper managed to see off his rivals and faced more general knowelge questions in a bid to win the jackpot counter.

He didn't succeed in getting the special counter over the tipping point and Ben offered him the chance to trade his winnings for three more counters.

The risk was definitely worth taking as David managed to walk away from the how with the jackpot prize.

Ben asked: "How you going to spend the money?"

David replied: "I'm going to do up the flat and go to Vegas."