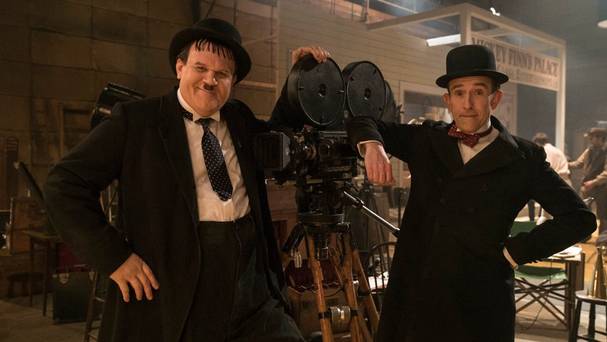 Whether or not you’ve ever wondered what it would be like to hear Laurel and Hardy turn the air blue, Stan & Ollie intended to show you. An early version of the forthcoming biopic began with the beloved duo ambling through a studio backlot at their 1930s peak, discussing their personal lives in terms that would have had the censors of the day falling out of their seats.

“I’m glad we didn’t do it in the end,” says Steve Coogan, who plays Stan Laurel in a reedy tenor. “But there was a draft that really went for it. ‘Guess who the f**k I saw the other day,’ and so on. And everyone in the room was like…” He pulls a horrified face.

“This is not your grandmother’s Laurel and Hardy,” booms John C Reilly, the Ollie to Coogan’s Stan, putting on his deepest movie-trailer voice. “Well, we tried that. But it was decided that we should take a different approach.”

Accordingly, the language was dialled back to PG – but the discussion itself, with its level-headed reflections on alimony payments and dubious employment contracts, remained in the film. For lovers of two comedy titans who couldn’t broach such subjects on screen, that in itself is shocking enough.

That backstage perspective is what Stan & Ollie is all about, triangulated by Coogan and Reilly via note-perfect mimicry, actorly insight and some astonishing prosthetics. Prologue aside, the film – from Filth director Jon S Baird – is set during Laurel and Hardy’s final tour of Britain and Ireland in 1953, when their popular appeal was waning and their relationship falling apart. They were in their sixties at the time; Coogan and Reilly, each of Irish Catholic extraction, are both 53.

Wildly different though Coogan and Reilly’s careers may be, it makes sense that a Laurel and Hardy biopic should be the intersection point – and not just because both have been fans since childhood.

Reilly broke into film at 24, in Brian De Palma’s Casualties of War, then played oafs, naïfs and kooks for directors such as Martin Scorsese and Paul Thomas Anderson, before being nominated for an Oscar for his work in Chicago. He then discovered a kindred comedic spirit in Will Ferrell, with whom he made Talladega Nights, Step Brothers and the forthcoming Holmes & Watson.

Coogan, meanwhile, took the reverse route. “I couldn’t get arrested as an actor, but I could get arrested as a comic,” he says. “So I did that and thought, ‘I’ll go where the money and work is, and figure it out later on’.” His defining creation, Alan Partridge, transitioned from television to film more smoothly than Coogan did: an attempt to break Hollywood in the early 2000s is best remembered, if at all, for a small-in-all-respects supporting role as a miniature Roman centurion in the Night at the Museum series.

Far more fruitful has been his ongoing collaboration with the British director Michael Winterbottom, which has yielded (among other treasures) the picaresque sitcom The Trip with Rob Brydon. Then there was a starring role in Stephen Frears’ Philomena, whose four Academy Award nods – and specifically, the one for best adapted screenplay – means Coogan can also call himself an Oscar nominee.

Coogan ended up in Laurel’s shoes thanks to Jeff Pope, his Philomena co-writer, who mentioned one day that he was also working on a Laurel and Hardy script. Too proud to ask for a shot at the co-lead, Coogan instead embarked on a psy-ops campaign, telling mutual friends how much he admired the legendary double-act until word made its way back to Pope.

“He told me one day that someone had mentioned my name as a possible Stan. And I said – airily – ‘Okay, why not?'” Reilly was one of three Hardys suggested by Coogan (he won’t name the others).

“But I was intimidated by the prospect,” Reilly says. “I also remember thinking, ‘Who else?’ I’ve talked my way out of jobs before by suggesting people who would be better. But I couldn’t think of anyone else that was the right age and had the right voice.”

Coogan nods. “However arrogant this may sound, I remember thinking I was …”

“…destined?” Reilly interjects, with a look.

“Let’s not go there,” Reilly says. “Many other people could have done it…”

“No, no, I’m throwing Hugh Grant under a bus,” Coogan clarifies. “By mentioning him, people will think, ‘Oh God, he would have been terrible’.”

The task of getting into Laurel and Hardy’s late-life mindset was no mean one, but history had slid an ace up Coogan and Reilly’s sleeves. Laurel had always left the private number of his apartment in the telephone directory, and fans would often ring to discuss his work, or just to hear the voice of their hero. Some recorded the calls, and for both actors, the unguarded, reflective conversations were a treasure trove of insight.

Yet both also knew that the film would live or die on their ability to convince physically. So in addition to the facial prosthetics – designed by Mark Coulier, who turned Tilda Swinton into an elderly man for Suspiria – the two spent three weeks rehearsing with the War Horse master puppeteer Toby Sedgwick, to perfect their subjects’ body language and gestures.

Sedgwick also helped them hone a skit written by Laurel for the 1950s tour called ‘Birds of a Feather’. A farce involving a waiting room with two doors, and endless missed connections, it was performed on stage, but never on camera: the performance in Stan & Ollie is the only time it will have been seen since.

Reilly describes playing the scene in front of an audience of extras as “a moment”.

“I started to break down, because this material Stan had written 60-some years earlier still just worked. It required such delicate timing, all this counting offstage, but when we got it, you could just feel the joy. And I got emotional, and Steve was like, ‘What the f**k is wrong with John?'”

“The curse of beautifully timed comedy is the more refined it becomes, the more it looks like it just happened,” says Coogan. “People often say to me about my stuff, ‘Oh, you must be having great fun all the time.’ And I go, ‘No, it’s actually really hard work’.”

The tension between a comic and his character is something Coogan explored with Winterbottom across three series of The Trip, in which he and Brydon play insecure, bickering versions of themselves. Coogan has just finished shooting Winterbottom’s next project in Mykonos: a black comedy called Greed in which he plays “a billionaire c*** who shafts his employees’ pension scheme and runs sweatshops in the developing world”. Film4 and Sony Pictures International have described the story as “fictional” but Coogan says if viewers don’t recognise the notorious businessman on whom the character is based, “then they must have learning difficulties”.

Yet even in a modern-day big business satire, he noticed elements of Laurel and Hardy creeping in. “Ollie’s hard to avoid if you do a certain kind of blustery archetype,” says Reilly, adding that he found himself weaving classic Hardy splutters and flashes of tendresse into his vocal performance in the Disney animation Wreck-It Ralph.

For Coogan, likewise, it was the humanity underpinning their work that showed him how to develop Partridge from his first incarnation as a “contemptible idiot” into a more layered, pathos-laden figure. “The wisecracking, edgy stuff in comedy from any generation is ultimately always transcended,” says Coogan. “But Laurel and Hardy have this lasting human connection in part because there’s this sliver of sadness in their work. Both of them are disappointments to each other…”

“…and yet neither of them leaves,” Reilly goes on. “Another fine mess, over and over. Life is futile, yet here we go again.”

‘Stan & Ollie’ will be released in Irish cinemas on January 11