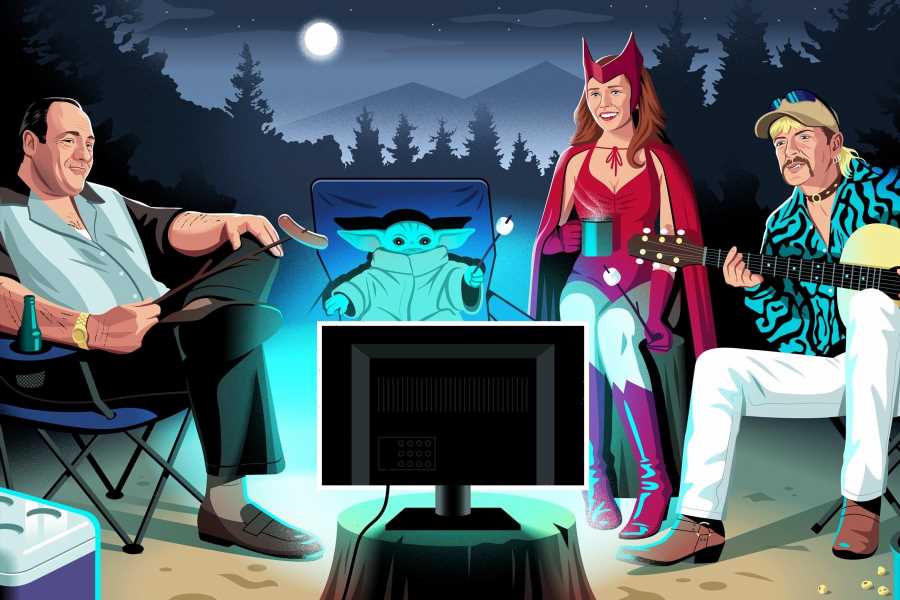 The Year That TV Saved Us

Back in March, while my son and his friends were enjoying a chilly morning of socially distanced outdoor fun at a campground, all the dads lingered near the fire our kids had built. We spent a few minutes catching up on how we’d all been dealing with one year and counting of pandemic life. Then, the conversation turned to where it inevitably has since the lockdown began: television.

The other dads all seemed like genial suburbanites. Their face masks, though, hid not just droplets, but the desperate fiending of TV junkies who had gone too long since their last binge. They needed recommendations, and they needed them with greater speed and specificity than I could provide. “What about Ted Lasso?” I’d say, and they would twitch and sputter, “Seen it! What else you got?” Eventually, their eyes began to look so bloodshot and haunted, I worried that the day would turn into my own personal “Pine Barrens” from which I would not emerge — and not just because several of these men had, like so much of the world, used the pandemic as an excuse to finally watch The Sopranos.

Think back to those early days of quarantine. Every form of entertainment, escape, and distraction vanished one by one. First, live sports shut down. Then, concerts and theater. Going to the movies, assuming your state allowed it, was a game of Russian roulette. Whether you were a club-hopper or a museumgoer, options for getting out into the world, seeing and doing things, all ceased to exist.

But then there was television. Sweet, nourishing, unstoppable television. While all other sources of fun hit an extended pause, TV kept right on going, providing a lifeline to the outside world as we began months of sheltering in place. Our relationship with the medium has surely been fundamentally altered by our time locked away from everything and everyone else. Even if we all respond to a post-vaccination world by becoming ferocious extroverts and reckless outdoorspeople, we’ll always have memories of our prolonged stay in front of the small screen during this nightmare, sometimes as the only comfort we could find.

The first quarantine sensation was Tiger King, a docuseries that dropped on Netflix about a week after the quarantine began. A lurid true-crime story involving exotic animals (some of them managed by a guy who called himself Joe Exotic), fluid sexuality, country music, and a murder-for-hire plot, it provided an early outlet for people who wanted a surreal, cracked-mirror reflection of our world rather than the terrifying version they could glimpse outside their windows. It was also an ethical and journalistic quagmire, even more so than the next big lockdown hit, The Last Dance. A 10-part hagiography of Michael Jordan, the ESPN miniseries offered deep archival footage and salty, self-aggrandizing quotes from the man himself that overwhelmed any qualms about the filmmakers letting their subject (who also had an executive role via his production company) steer the story. Both series became instantly meme-worthy, with screenshots of Jordan saying “And I took that personally” dominating social media for much of the spring and summer.

Soon enough, our hunger for outsize figures having the kinds of adventures we couldn’t expanded to scripted television. Disney+ made the idea of weekly episode releases cool again with the second season of The Mandalorian and, a few months later, the debut of WandaVision. While both are part of insanely popular movie franchises (Star Wars and the Marvel Cinematic Universe, respectively), the series took clever advantage of the TV format — WandaVision in particular, since its episodes often played as fantasy versions of classic sitcoms. The steady stream of episodes kept people talking as if they were the ones getting to travel to a galaxy far, far away with Mando and Baby Yoda (Grogu to his friends), or to magically become Wanda’s new wacky neighbor. That hunt for a weekly, larger-than-life fix could sometimes backfire — millions howled in indignation at the stultifying end of HBO’s Nicole Kidman/Hugh Grant thriller miniseries The Undoing (“Why is she in a helicopter now?!”) — but there was still something rewarding about putting in the effort to stick with a story the old-school way.

Of course shows whose episodes arrived all at once still captured our fancy if the characters were colorful enough. If they were English, all the better. The fourth season of The Crown finally reached the modern era of the monarchy, diving into the tabloid-friendly story of Prince Charles and Princess Diana’s tumultuous marriage. Meanwhile Bridgerton, an energetic Regency romance and the first Netflix series from superproducer Shonda Rhimes, was a frothy bodice-ripper come to life. Audiences ate them both up like a Sunday trifle. (Even British actors playing American could prove addictive, as chess sales boomed in the aftermath of Londoner Anya Taylor-Joy’s mesmerizing star turn as a teen prodigy in The Queen’s Gambit.) And from just across the Irish Sea came Normal People, the Hulu adaptation of author Sally Rooney’s tale of messy, hot-and-heavy love between two young millennials in Dublin, which suddenly had audiences appreciating sensuous sound design.

Shows that mined the darker side of life pulled us in, too. As the pain and fear of quarantine began to overlap with the world exploding in social-justice protests, several dramas arrived feeling as if they had been created for this precise moment of rage. HBO’s Lovecraft Country (a genre mash-up about a Fifties black family battling monsters both real and supernatural) and Showtime’s The Good Lord Bird (with a fire-breathing, improbably hilarious Ethan Hawke as abolitionist John Brown) delved into historical racist horrors, while I May Destroy You (also HBO) presented a riveting exploration of sexual assault, consent, and healing.

As it became obvious that we would be indoors for the long haul, many sought refuge from the depressing state of the world by turning to shows about nice people. AppleTV+ had its first word-of-mouth hit with Ted Lasso, starring Jason Sudeikis as an unqualified English Premier League coach surprising everyone with an almost superhuman level of kindness. The final season of the heartwarming Pop TV sitcom Schitt’s Creek prompted a new wave of viewers to binge the entire series, about a spoiled, rich family forced to grow up after losing everything but one another. And the remake of All Creatures Great and Small — a gentle drama about a polite veterinarian in the English countryside of the Thirties — arrived on PBS only days after the Capitol insurrection in January, providing blessed relief in its world full of good people and cute animals.

Niceness also fueled one of the quarantine’s first viral hits: Some Good News, a web series hosted by John Krasinski that attempted to live up to its title while bringing in his many celebrity friends. (The show became almost too popular, as vocal fans seemed betrayed when the seemingly DIY project was sold to CBS.) In one episode, Krasinski presided over a virtual wedding for a pair of Office superfans, then surprised them with a video montage of all his old castmates performing the dance from Jim and Pam’s ceremony. It was far from the only cast reunion meant to raise spirits and charitable donations, whether the actors were performing new material set in Covid times (as both Monk and Parks and Recreation did), or simply jumping on Zoom together to reminisce about the good old days.

The pandemic postponed perhaps the most-anticipated reunion of all, as HBO Max was set to launch with the six Friends stars gathered around the old Central Perk couch. Instead, the streamer had to premiere Phoebe-less (and later did West Wing and Fresh Prince of Bel-Air reunions), entering an increasingly crowded field that also saw Peacock, Paramount+, and Discovery+ debut in lockdown. (Pour one out for Quibi, a streamer meant to provide short videos for people on the go, only to arrive in a world where no one was going anywhere.) In the before times, the sheer tonnage of new shows and new places to see them could feel oppressive. Now, it felt miraculous: absurd abundance in what was otherwise a time of great entertainment famine. As high-profile movies like Wonder Woman 1984, Zack Snyder’s four-hour new version of Justice League, or Steve McQueen’s collection of Small Axe films were released directly to streaming, it began to feel like everything was becoming television.

The streaming explosion also made it easier than ever for people to finally cross off classic shows on their bucket lists. Nostalgia — whether for shows we’d already watched in better days, or older ones we’d been hearing about forever without having the time to get around to them — transformed streamers’ library titles from afterthought to essential. The Sopranos in particular had another cultural moment, as millennials and Gen Z found themselves drawn to the parent series of modern television, finding something painfully recognizable in a show whose protagonist was convinced the best in life was over and all that lay ahead was ruin.

Relatively speaking, there have been better overall stretches of Peak TV than the one that carried us through Covid. And with the prepandemic backlog long since exhausted, the relentless pace and volume of new content has dropped precipitously in recent months. (You’ll have to wait a good while longer for that Game of Thrones spinoff or new seasons of Atlanta, among many others.) That’s OK, though. After two decades of The Wire, Breaking Bad, Fleabag, and more, nobody needs to be told that TV can be as great as movies, theater, or any other form of art. But where the medium was once derided for playing never-hard-to-get — always on, available at any hour of the day — that ubiquity became the thing we all latched onto to stay safe and sane when the rest of the world turned off.

Thanks, TV. We really, really needed you.