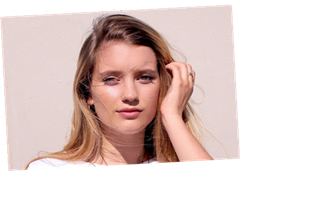 WrapWomen LA Blog: “I think this is a really important time and a very overdue moment for these stories to come to light,” actress says

Having been in lockdown for over a year, traveling to a tropical island sounds pretty nice right about now… unless you’re Shelby Goodkind from Amazon’s “The Wilds.”

The series follows Shelby, played by Mia Healey, and a group of teen girls from different backgrounds who unknowingly become part of a giant social experiment after their plane crashes on a deserted island. Part survival drama, part dystopian slumber party, the series explores the past and present struggles of young women growing up in modern society.

“Seeing a show that was led by eight women, young women, it was just so powerful,” Healey told WrapWomen. “You read a script and sometimes you just know it’s important and you should be doing it.”

The Australian-born actress was particularly drawn to Shelby, a Christian Texan pageant queen and do-gooder who, despite her cheerful personality, has a few secrets of her own, including her sexuality. Shelby is a lesbian, but she struggles with her internalized homophobia and her strict, religious parents.

“When I read the email about Shelby and it said she was this seemingly perfect character that had all of this hidden grit and secrets she was keeping from the others, I was sold,” Healey recalled. “That sort of character, that depth, that grit, is something that I’m so inspired by… she’s kind of been the dream role for me.”

Healey applauded “The Wilds” for demonstrating the importance of inclusive storytelling by focusing on eight female leads who vary in culture, class and sexuality.

“That’s the beautiful thing about people and about this world. It’s that we’re all so different,” she said, adding, “I think art is life. So if we’re just seeing straight white people [on screen] all the time, it’s unfair… it’s not real, it’s not how it looks when you go outside.”

Until “The Wilds,” the only on-screen lesbian stories Healey had seen were in more mature and serious films. But in playing the role of Shelby, she felt it was critical for audiences to see a queer relationship from a teenage perspective.

“I think this is a really important time and a very overdue moment for these stories to come to light,” Healey said. “Ignorance is a very dangerous thing. If people — especially younger people — watching TV are seeing people that are different to them on screen, that are being respected by their colleagues and respected by the people that they’re working with, then they’re going to respect people in life.”

With Season 2 of “The Wilds” already in the works, Healey hopes to see Shelby “experience her queer side more freely. I would love to personally see Shelby kind of sit back and get comfortable with herself and who she is.”

And with the arrival of boys on the island, things are about to get a lot more interesting…

See WrapWomen’s full interview with Healey via the video up top.

WrapWomen is a power base of influential women of entertainment, media, technology and brands committed to changing the face of their industries. Through media and live events, we provide a platform to accelerate the vision of women who are building towards a more equitable world. Click here to sign up for our weekly newsletter!