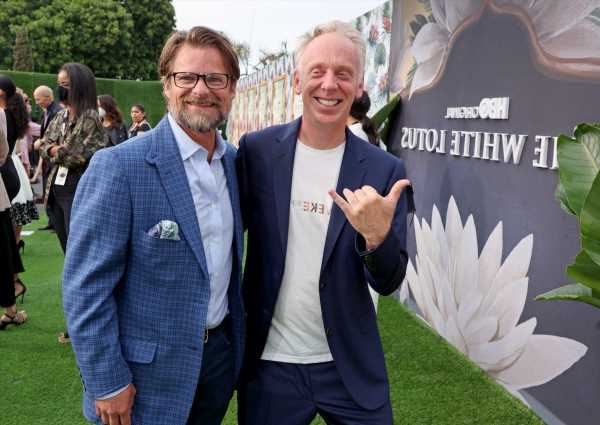 'The White Lotus': Steve Zahn Worried He Might Die While Shooting the Scuba Scenes

Throughout HBO’s The White Lotus, father and son pair Mark (Steve Zahn) and Quinn Mossbacher (Fred Hechinger) earn their PADI scuba diving certification. In episode 6, the pair finally scuba dive in the ocean rather than the fancy Hawaiian resort pool. The clear blue water and sea creatures are remarkable as the pair scuba; however, the men hated it. Did they use stunt doubles, or was that indeed Zahn and Hechinger under the water the entire time? Why didn’t they enjoy the scuba scenes?

In The White Lotus Episode 6, Quinn wakes up from his last night of sleeping on the beach, and the Native Islanders yell, “C’mon, brother, we need you.” He jumps on the Hokulea (a voyaging canoe) again. Later he tells his parents that he’s not going home. The Hokulea team needs a sixth teammate. He plans to finish school online and remain in Hawaii, but Mark and Nicole brush off his idea.

After breakfast, Mark and Quinn finally scuba dive in the gorgeous waters off the coast of Hawaii in The White Lotus Episode 6. The scenes are nothing like viewers might see on network television. Although fans worried that Quinn might accidentally die while scuba diving, the excursion goes off without a hitch.

Paula (Brittany O’Grady) pukes off the side of the boat while the men scuba. However, she doesn’t die either during the scuba trip, like fans thought might happen. Instead, Paula has a panic attack because the police arrested Kai after her plan to steal Nicole Mossbacher’s (Connie Britton) bracelets went askew. Although fans suspected that Paula might die on the boat, she also returns safely to the resort.

Many viewers wondered if Zahn and Hechinger had stunt doubles for the scuba diving scenes in The White Lotus, but they didn’t. Both men truly got their PADI licenses for shooting the diving scenes. Although, they were not happy about it.

“Fred and I both got our PADI [scuba] license,” Zahn explained to The Hollywood Reporter. “Neither of us were really into it,” he laughed. “Our instructor was a little bewildered. Ninety-nine percent of the time, people are excited, but I was like, ‘How many ways can I die underwater?’”

Luckily, viewers couldn’t tell how nervous Zahn and Hechinger were during the underwater scuba scenes.

The 53-year-old actor had other reasons for despising the scuba scenes in the The White Lotus. Before Zahn joined the cast of The White Lotus, he filmed the 1995 movie Crimson Tide in 1994. Although it was over 25 years before the scenes in the HBO series, Zahn still had a bad feeling about scuba diving.

“I had a bad experience shooting Crimson Tide,” Zahn told The Hollywood Reporter in the same interview. “There’s a scene where we’re all drowning in the sub. They told us we’d be underwater for 30 seconds. Thirty seconds doesn’t seem long. But when you’re acting that you’re dying, it gets difficult. They said, ‘If you feel like you need help, just cross your arms, and we’ll come to get you.’ First take, everybody, crossed their arms.”

Luckily, Zahn didn’t have to pretend he was drowning while filming The White Lotus, but he still wasn’t happy about the scuba scenes.

All six episodes of The White Lotus are currently available for streaming on HBO and HBO Max.