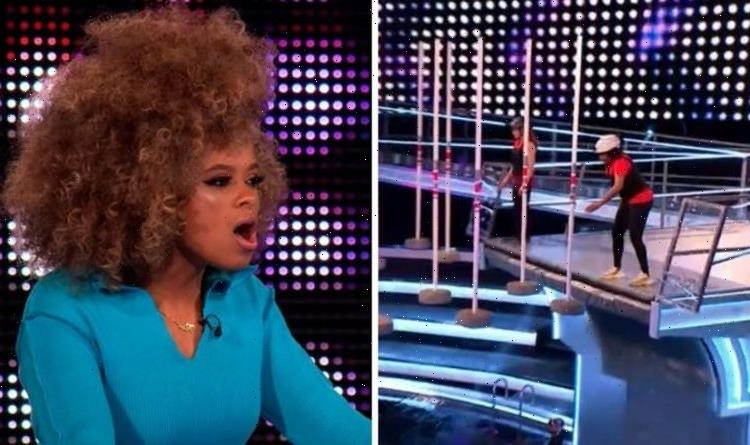 The programme sees contestants take on challenging physical challenges which they have to complete, but most fall into the water below. But ITV viewers have criticised the second episode of the show, which explained that contestants risk falling into “500 tonnes of water,” which some have been left confused by.

Many athletic contestants take part to try their hand at winning, most of whom have jobs within sports.

But most struggle to get over the first hurdle, with Fleur and Ashley observing as they struggle to stay on the platform.

Many people took to social media to question the use of water after the narrator explained 500 “tonnes” were used.

One asked: “How many double decker busses inside 6 football pitches is that?”

Another wrote: “There’ll be a hosepipe ban by next week if this heat carries on and ITV will pull #TheVoid off air because it contains 500 tonnes of water.”

Someone else penned: “#thevoid @itv When did we start measuring water by weight? If I were to fall into 5000 gallons of water I would not be concerned. If 5000 tonnes of water were to be dropped on my head I would be concerned. I think you lack the ability to add drama to a lacklustre idea.”

“#thevoid Well it’s not really a void, more a tank or water,” another argued.

Others suggested that the show was similar to previous programmes.

Another echoed: “It’s like a very poor man’s version of ninja warrior. And I’m not that keen on that. The void is definitely one that I’ll be avoiding in future. #thevoid.”

Others labelled the show “boring” and repetitive, with one saying: “I am predisposed to enjoy anything with Ashley Banjo in it. But wow, this is a boring watch. It’s just a series of people falling into the water. #TheVoid.”

“Is The Void called The Void because it’s de-Void of any entertainment? ‘thevoid,” another asked.

Singer Fleur, 33, posted on Twitter earlier urging people to tune into the show

Speaking on The One Show last week, dancer Ashley, 32, described the show as “a great show.”

Some viewers at home did enjoy the show, with one writing: “Loving #TheVoid mixing up gladiators, total wipeout and ninja warrior. Ever since it’s a knock out, us [Brits] love seeing folk fall over and down in the name of entertainment.”

“Catching up on #TheVoid safe to say my lil man absolutely loves it,” a second added.

A third commented: “#thevoid giving me total wipeout vibes, I love it.”

The Void airs on Saturdays at 8pm on ITV.