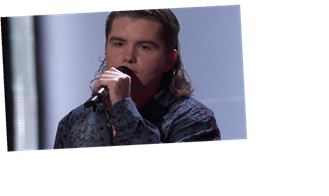 Season 20 of The Voice kicked off with a four-chair turn that nearly brought the coaches to blows!

Kenzie Wheeler, a 22-year-old singer from Dover, Florida, was the first hopeful to take the stage on Monday’s season premiere, and wowed the coaches with his smooth, deep rendition of “Don’t Close Your Eyes” by Keith Whitley as well as his epic mullet!

“I love my mullet. Probably won’t ever cut it off,” the self-proclaimed “country boy” said of his flowing locks in his introduction.

The hairstyle certainly worked its magic, with Kelly Clarkson turning her chair almost instantly, followed by John Legend. Returning coach Nick Jonas tried to block Blake Shelton as he turned, but it didn’t work — because Kelly had already used her block — and finally, Blake, knowing he was blocked, turned his chair to give the young country singer credit for his performance.

But before Kelly, John and Nick could face off to land Kenzie on their team, Blake had something to say — specifically, about Kenzie’s hairstyle, which he himself notably rocked back in the day.

“I want you guys to know, this guy has the triple-threat mullet,” Blake said with a laugh. “First of all, he’s got the party in the back, he’s got the shaved sides, but then, the rare widow’s peak. The rarest of all mullets — this guy is a unicorn!”

The perfect mullet does exist! #TheVoice#UnicornMulletpic.twitter.com/8idGpRGN4Z

Kelly was desperate to have Kenzie’s mullet, and his smooth country baritone, on her team, telling the young singer that she used her block first of all the coaches to show “how good I know you are.”

“I’m gonna fight so hard for you,” she added. And she certainly had to, as Blake — after bemoaning that he “got screwed” out of having the singer on his team — campaigned for Nick, appealing to Kenzie’s love for baseball and other bargaining tactics.

Luckily for Kelly, her block strategy paid off, as Kenzie chose to join her team, the first Team Kelly member of season 20!

“Kenzie came out with that deep, ’80s, ’90s country voice that is right up my alley. And then I turned around and he has his awesome mullet going on. It’s kind of punk rock-cowboy, I really dig it.” Kelly said.

As The Voice enters its 20th season, and prepares to celebrate its 10th anniversary, ET sat down with the coaches, who all noted that there’s still something thrilling about the show’s “captivating” blind audition process that fans love to watch.

“It’s all about the talent and not the aesthetic, right off the bat,” Kelly explained. “It’s a really interesting thing to just hear something and be moved by it and turn around and go, ‘What?!'”

In fact, the performer and talk show host shared that the Blinds for season 20 “were my favorite Blinds to shoot. Like, it was so much fun. I literally kept coming home, thinking on my drive home, ‘I can’t believe I get paid to just go and hang out and it’s really fun.'”

“We’re so fortunate we get to do what we love to do and we’re so fortunate that we have art as such as an outlet for us creatively and emotionally,” John said, also sharing his gratitude for the crew that makes their production a possibility amid the COVID-19 pandemic. “It’s not just a job, because we actually enjoy doing it. It’s fun to be around our coworkers and we get to make music with people who have dreams and are inspired and that’s exciting.”

The Voice airs Mondays and Tuesdays at 8 p.m. PT/ET on NBC. See more from the upcoming season in the video below.

‘The Voice’: John Legend and Kelly Clarkson on If Their Kids Will Pursue Music Careers (Exclusive)