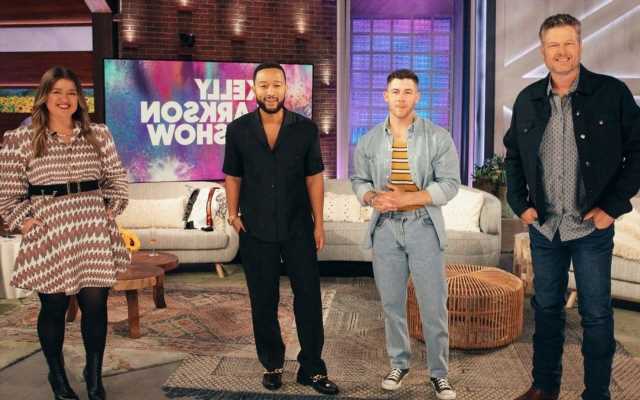 ‘The Voice’ Recap: The Top 9 Join Forces for Trio Performances

Kicking off the new episode of the NBC singing competition show is Victor Solomon from Team John Legend with a performance of MercyMe’s ‘I Can Only Imagine’ as the judge gushes over Victor’s versatility as an artist.

AceShowbiz -The Top 9 of “The Voice” season 20 further tried to win over the judges’ hearts with their new performances in the Monday, May 17 episode. In the new outing, they hit the stage to sing a new song choice before joining forces with other singers for a trio performance.

Kicking off the night was Victor Solomon from Team John Legend with a performance of MercyMe‘s “I Can Only Imagine”. John praised Victor’s versatility as an artist. Following it up was Jordan Matthew Young from Team Blake Shelton. He opted to sing John Conlee‘s “Rose Colored Glasses” and Kelly Clarkson likened the performance to Travis Tritt‘s.

The first trio for the night were Cam Anthony (Team Blake), Kenzie Wheeler and Corey Ward (Team Kelly). The three teamed up to perform “Fooled Around and Fell in Love” by Elvin Bishop. Later, Pia Renee tried to redeem herself by singing “Turn Your Lights Down Low” by Bob Marley and Lauryn Hill. Kelly loved it, saying that Pia performed like she’s already a star. Meanwhile, Nick Jonas compared it to an awards show performance.

Team Nick’s Rachel Mac sang Christina Perri‘s “Human” and John dubbed it “a revelatory performance.” Corey then took the stage to sing “Arcade” by Duncan Laurence, earning praises from Blake for his authencity.

The next trio were made of Victor, Pia and Dana Monique (Team Nick) who opted to sing Earth, Wind & Fire‘s “Shining Star”. They looked like they had fun during the performance as they took turn to showcase their skills.

Up next was Gihanna who belted out “Reflection” by Christina Aguilera. Nick and John were impressed by the performance and Kelly noted that Gihanna slayed the song despite its difficulty. Jordan, Rachel and Gihanna then hit the stage to perform “Leave the Door Open” by Bruno Mars, Anderson Paak and Silk Sonic as the final trio that night.

Cam then performed “It’s So Hard to Say Goodbye to Yesterday” by Boyz II Men as he opened his performance by going a capella. Kelly thought it was incredible take on the song while Blake believed that Cam would go far in the music business. Rounding out the night was Kenzie who sang “He Stopped Loving Her Today” by George Jones. Nick thought the performance “enjoyabble,” while Kelly said she loved his tone and voice.