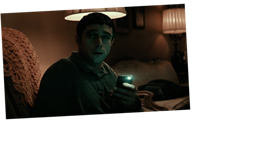 ‘The Vigil’ Trailer: An Orthodox Jewish Ritual Gets a Haunted Twist in IFC’s New Horror Movie

An orthodox Jewish ritual gets a haunted twist in writer/director Keith Thomas’ new horror movie from IFC Midnight, “The Vigil.” The film originally premiered at the Toronto International Film Festival, where it scored critical acclaim out of the Midnight Madness section. This horror movie set over the course of one night will open in available theaters, plus on VOD and digital platforms, February 26. Watch the the first trailer below.

“Steeped in ancient Jewish lore and demonology, ‘The Vigil’ is supernatural horror film set over the course of a single evening in Brooklyn’s Hasidic Borough Park neighborhood. Low on funds and having recently left his insular religious community, Yakov (Dave Davis) reluctantly accepts an offer from his former rabbi and confidante (Menashe Lustig) to take on the responsibility of an overnight ‘shomer,’ fulfilling the Jewish practice of watching over the body of a deceased community member. Shortly after arriving at the recently departed’s dilapidated house to sit the vigil, Yakov begins to realize that something is very, very wrong.”

“All of us have suffered ‘dark nights of the soul’ (likely several times over during the upheaval of the past year) and most of us emerge from those lean and often frightening hours changed — generally for the better but sometimes for the worse,” Thomas said of the film.

IndieWire’s Eric Kohn praised the film out of Toronto last year, writing, “Set almost exclusively within the confines of the shadowy home, ‘The Vigil’ suggests the potential for a new angle on ‘The Conjuring’ universe via Jewish guilt and Holocaust trauma. And if ‘Conjuring’ owner Warner Bros. doesn’t ingest its lore, Thomas has ample potential for a new franchise of his own.”

He added, “Thomas’ story wastes no time turning up the scare factor, with the usual parade of flickering lamps, sudden movements in the shadows of the frames, and streaking music cues just in case the last two devices didn’t get the adrenaline flowing enough. However, even as ‘The Vigil’ settles into a familiar routine, it tackles that task with a polished, at times even elegant approach to a haunted house formula.”

Watch the trailer below. “The Vigil” premieres in theaters and on VOD February 26.

Chinese Zodiac: What is the Earth Goat horoscope and what year is it?