Home » TV & Movies » ‘The Suicide Squad’: James Gunn Details the Film’s Post-Credits Scenes and What They Mean for the DCEU

‘The Suicide Squad’: James Gunn Details the Film’s Post-Credits Scenes and What They Mean for the DCEU

[Editor’s note: The following post contains spoilers for “The Suicide Squad” and its post-credits scenes.]

After more than two hours and plenty of R-rated gags, James Gunn’s “The Suicide Squad” ends on a high note, with some caveats. The so-called Suicide Squad, while somewhat fractured, has emerged victorious against most of its foes (a crazy coup in the fictional country of Corto Maltese, and also a large starfish-shaped alien named Starro), has cemented its relationships (particularly that of Margot Robbie’s Harley Quinn and Idris Elba’s Bloodsport), and gotten a little bit wiser about the very people who control their fates.

It’s not exactly all wrapped up in a tidy bow, but it’s satisfying and silly and strange, all good things. Still, it’s not entirely over, as Gunn unspools a pair of post-credits scenes that both add to the story at hand, and set the stage for some more wack stuff to come. Ahead, the filmmaker details to IndieWire what he hopes viewers will get out of both scenes, including some necessary adjustments to how they perceive two of the film’s most indelible characters.

[One more time: Spoilers ahead for both “The Suicide Squad” and its post-credits scenes.]

1. Weasel Lives (And Maybe Isn’t Such a Bad Dude)

The film kicks off with a surprise: the revelation that master string-puller Amanda Waller (Viola Davis) has actually dispatched two Suicide Squads to Corto Maltese, neither of which emerges from early battles unscathed. Gunn kills off a mess of his baddies in the milieu, but one death hits just a bit harder: the almost-immediate drowning of Weasel (played by Gunn’s own brother Sean Gunn, who frequently gives life, via motion-capture performance, to the more outlandish of his brother’s superheroes, including Rocket Raccoon in the MCU films).

We’re told that Weasel — who is, just as his name promises, a large, anthropomorphic weasel creature — is a child murderer, and has been imprisoned for killing no less than 27 kiddos. But, he’s…sort of cute? So when he drowns within minutes of being dropped from a helicopter into the sea that surrounds the fictional Latin American country of Corto Maltese, it’s kind of sad.

It’s even worse when Michael Rooker’s Savant tries to save him, pulling him out of the ocean and on to the beach only to find that, yup, he’s still dead. But the first post-credits scene supposes something else: what if Weasel lived? As the large, furry murderer wakes up on the beach, it’s hard not to feel a flicker of happiness. It’s even better when he goes toddling off toward the inland, where we assume he’s missed the big battle and is about to re-traumatize the people of Corto Maltese, just as they’re attempting to put their lives back together.

“There’s a lot of people in prison for crimes they didn’t commit,” Gunn said with a laugh. “Don’t you think that if there were 27 [dead] kids and Weasel was living on the block, that you’re going to blame Weasel. Is he guilty? I think it’s a Project Innocence situation for Weasel and he deserves to really have the legal team that he probably did not have the first time through. I mean, he is one step above a Greyhound, if that, when it comes to his brain capacity.”

As for his brother’s performance, Gunn loves it, too. “Sean’s amazing,” he said. “It was also cool to make a body that was built in the shape of Sean [for once] so that he was able to use his body for real. And the noises [he makes] are crazy. Sean’s noises are so funny, all that stuff with him. Those noises are just, it made me laugh so hard. So, he was great. He’s great to work with!” 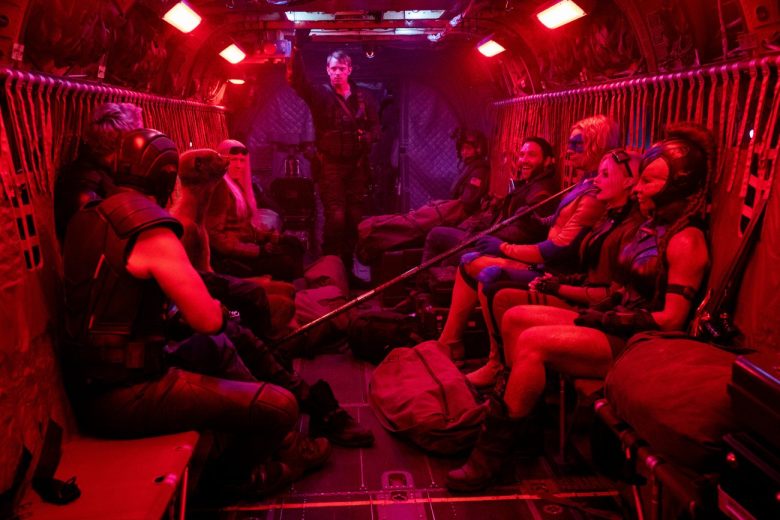 2. Peacemaker Gets Another Shot (Including His Very Own TV Show)

The film’s second post-credits scene sees yet another resurrection, though this one is certainly less surprising than Weasel’s. Blame corporate synergy for that one, because while the film ends with John Cena’s Peacemaker getting royally roughed up during one of the film’s most painful fight sequences, there’s no real possibility he’s dead; after all, he’s got a TV show coming out soon! Gunn himself created the HBO Max series, entitled “Peacemaker,” which is due to hit the streamer in January 2022 for an eight-episode run.

But, given the way Cena’s character acts in the film — including killing off beloved leader Rick Flag (Joel Kinnaman) — the filmmaker knows he’s got some explaining to do. A show about this guy? The post-credits scene sets the stage: a bruised and battered Peacemaker, AKA Christopher Smith, is recovering in the hospital, when he’s met by two new compatriots who have already appeared in the film as aids to Amanda Waller: Steve Agee as John Economos and Jennifer Holland as Emilia Harcourt. As these two see it, their new assignment to handle Peacemaker is some Waller-issued revenge, thanks to their little insurrection against their boss in the film’s final act.

He’s not going to make it easy, and his single-minded jerkiness is still intact, even at the end of the film. That, Gunn said, is what “Peacemaker” the show will try to work through.

“I think a lot of the characters change a lot in this movie,” Gunn said. “Peacemaker, he doesn’t, and if anything, he changes for the worst. And so it’s about being able to go on this adventure with this character who has a lot of true issues. Bloodsport’s [Elba] issues take two hours and 15 minutes to deal with. Peacemaker’s issues take at least six and a half hours. So, it’s about really giving us a glimpse inside this character.”

And making sure that Agee and Holland are very visible during that scene is also essential, all in hopes of reminding people that “Peacemaker” will not just be about Cena’s character. “It’s an ensemble show, which people don’t know,” Gunn said. “But it is about him. It is about his relationship with Danielle Brooks’ character, as well as Chukwudi Iwuji’s character, and Steve Agee’s character, and Jennifer Holland’s character. It’s about this team of people and how they each see the world and work together. And taking the world’s biggest douchebag and finding out, how did he become the world’s biggest douchebag?”

A Warner Bros. release, “The Suicide Squad” is now available in both theaters and streaming on HBO Max.