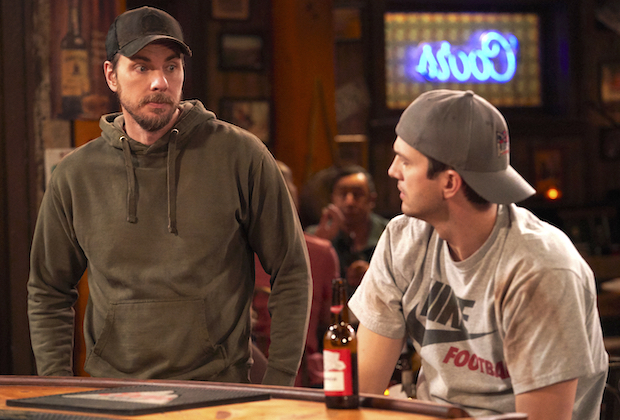 Warning: The following contains spoilers from Episodes 6 and 7 of The Ranch Part 6. For our previous recap, click here.

After saying goodbye to Danny Masterson’s Rooster Bennett, The Ranch‘s latest half-season introduces us to Dax Shepard’s Luke Matthews. So what’s this new bearded fella’s connection to the Bennett family? And how long does he intend to stick around?

Luke first turns up in Episode 6. Officer Wilkerson pulls up at Iron River Ranch with Luke in his backseat, having arrested the man for being drunk and disorderly. Luke then explains to the Bennetts that he’s a not-so-distant relative. Turns out that he’s Colt’s first cousin; his father was Beau’s brother Greg, who died in Vietnam. Luke is a divorcé who recently lost his mother to lung cancer, and the Bennetts are the only family he’s got left. We also learn that he’s a veteran of the United States army, and was previously stationed in Iraq.

The next day, Luke wakes up from his drunken stupor. He apologizes to Beau for making a bad first impression, then offers to help him fix his truck. When Beau accidentally drops a light in the hood of the car, the sound startles Luke and triggers some serious PTSD. He scolds his uncle, then attempts to pick a fight with Colt, who tells him to get lost. Later that night, Beau heads down to Luke’s campsite to have a chat with his nephew, who confirms that he suffers from post-traumatic stress. He then describes the harrowing incident that he can’t quite shake.

“I’m driving a f—king Humvee through Fallujah with six of my guys in back,” Luke begins, setting the scene for Beau. “This little kid runs out, waving his hands like something’s the matter. You stop, try to help, and right as I’m looking into his eyes, IEDs just start f—king blowing up, left and right. RPGs are coming off rooftops, snipers with high-caliber rounds just coming through the Humvee… Two guys are smoked, just like that, and then it’s just f—king chaos. It’s rounds ricocheting, broken glass, screaming, blood… It took forever for the convoy to show up and get us out of there. It was me and one other guy, that’s all that was left. The whole thing just evaporated.

“That’s not even the worst part,” Luke explains. “They force you to adapt to their tactics: If they’re going to block the roads with little kids so they can ambush us, we can’t stop. You gotta run through ’em.”

Concerned for Luke’s wellbeing, Beau invites his nephew to come stay at the house. Colt doesn’t want him anywhere near Abby or Peyton, so Beau lets him stay in Rooster’s hunting cabin. He eventually forgives his once-estranged cuz after he helps him retrieve a stolen calf in Episode 7.

Luke also gets a chance to bond with Maggie before she heads back to Florida. He encourages his aunt to open up about Rooster’s death, while he confides in her about the pain he’s suffered after losing his mom. Meanwhile, Maggie has her hands full with Mary, who’d been stealing money from the bar. Rooster’s ex has a serious drug problem, but she refuses to seek help when the Bennett family matriarch expresses concern.

Hit the comments with your reactions to Dax Shepard’s introduction on The Ranch, then mosey on back here on Sunday for a recap of the Part 6 finale!