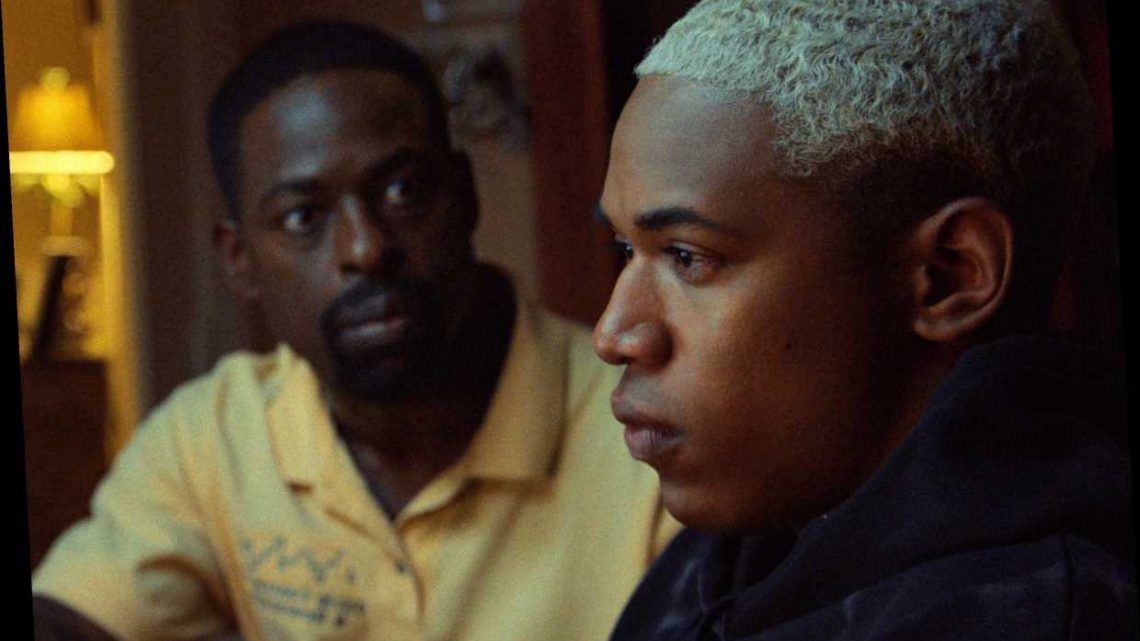 The Pain and Power of ‘Waves’

Trey Edward Shults pulls on the neckline of his shirt. He’s sitting in a too-small chair at the James Nomad hotel trying to make a decades-old wounds visible. “I have the scars still on my shoulder right here,” he says. “I tore my shoulder three times I think.” Waves, the family drama premiering November 15th, which Shults wrote and directed, is partially based on his life as a high school wrestler, and he wants to prove it. “It’s the hardest sport I’ve ever played,” Shults says. “I thought it’d be fun cinematically to put a viewer through that.”

Waves follows an upper-middle-class black family in South Florida whose perfect-seeming façade cracks as the story unfolds. The film’s first half centers on the teenage son, Tyler, a handsome, popular, and musically gifted high school wrestler whose future changes irrevocably after a devastating injury. This portion of the movie is chaos — told with jagged cuts, intense music, continuous shots meant to recreate the circular movements of a wrestling match, and aggressive bursts of neon reds and oranges showering his addiction-fueled descent. The second half follows Tyler’s younger sister, Emily, an introverted presence dealing with the reverberation of Ty’s actions throughout the family. Shults’ palette here is more somber, oceanic and muted. The transitions between scenes are smooth transitions, the songs tranquil. The effect is one of emotional whiplash, a movie that engulfs you in devastation and then pivots to a warmer embrace.

Pulling loosely from his own life — beyond the wrestling, there’s the drug problem and the death of a parent — Shults struggled for a decade with how to weave the disparate moments he wanted to portray into a coherent narrative. At first, he says, the idea for the movie was a general story about kids and music. Eventually, he crafted a narrative for Ty, but he still felt something was off — until he came up with the idea of dual perspectives, or what he calls “the yin and yang.”

“A brother and sister linked by this tragedy, and their family and then they have lovers on either side, that’s been the foundation for a long time,” Shults says.

Before the story could coalesce into a firm vision there was one more key evolution. The cognitive dissonance scratching at the corners of Waves is trying to process how a white writer-director was able to mine the racial and generational complexities of a modern black family. The Tyler character, played by Kelvin Harrison Jr., wasn’t African-American from the outset. Harrison starred in Shults’ 2017 movie It Comes at Night, and over the course of filming learned that Shults was planning on making his version of a high-school story. A year later, the director approached Harrison offering his choice of roles: the wrestling-star main character, or a supporting role as Emily’s boyfriend. Harrison chose Tyler.

“As soon as Kel wanted to play Ty it was like there’s a responsibility there for a number of reasons,” Shults says. “If we do this wrong, it’s bad.”

For six months, Shults, 31, and Harrison, 25, discussed how to merge their two experiences into one character. The young director would call and text his lead with questions about his life as a teenager growing up in New Orleans, his romantic experiences, and the way race affected his formative years. But it was their relationship with their fathers that became the core of the evolving character. At one point in the movie, Tyler’s dad, Ronald Williams, an intense and overbearing presence, has a frank conversation about race with his son. “We are not afforded the luxury of being average,” Ronald tells Tyler. The moment was pulled directly from Harrison’s life. His father was a successful jazz musician who pushed his son to be better than the man standing next to him.

“My dad is a great dad, amazing person, but he definitely did have this burden and this chip on his shoulders of really needing me to be the best musician I could possibly be,” Harrison explains. “He was like, ‘You have to be 10 times better than the other boy, the dude next to you, because you’re not going to get the opportunities.’”

Harrison continues, “A lot of those specific things from my own personal experience got relayed to Trey, and then Trey talked about his relationship with his stepdad and his dad, and we found these universal truths that really molded what Ronald is, which is like a dad is a dad, and the specificity of being a black dad on top of that.” 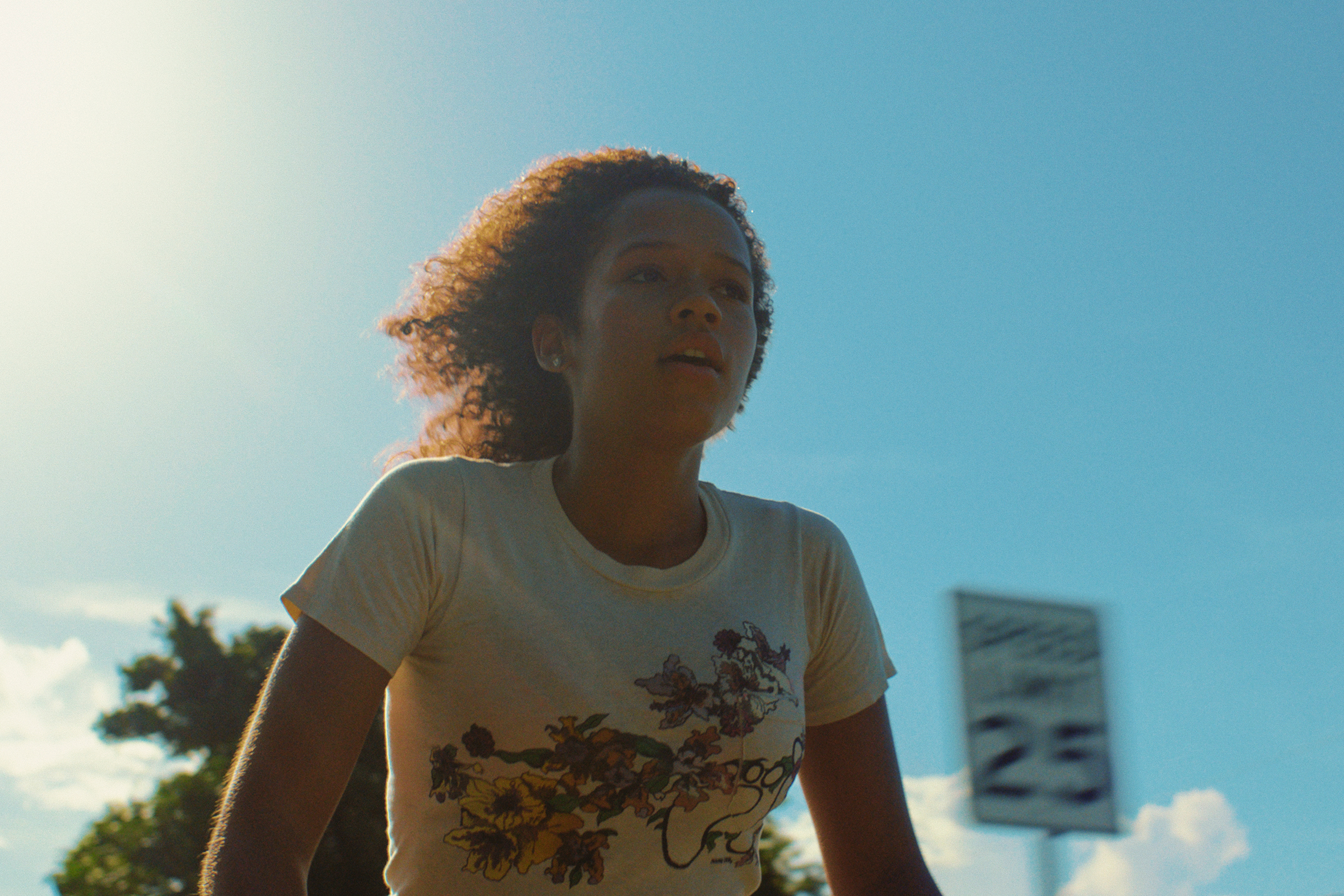 Taylor Russell as Emily in ‘Waves.’ Photo credit: A24

The dad is brought to life with a nuanced and searing performance by Sterling K. Brown. In Shults’s eyes, Brown was “the dream” actor to play Ronald, but the 43-year-old actor was hesitant after reading the initial script. Known for portraying the heartwarming Randall Pierce, one of America’s most beloved dads, on the NBC family drama This Is Us, Brown was being asked to inhabit a different type of father in Waves, one devoid of much of the primetime television warmth he’s cultivated over three years. “What drew me to it was what I thought repulsed me from it, repelled me from it,” Brown explains.

The Emmy-winning actor had issues with the violent climax of the film’s first half, and the racial politics it could open up. “Especially in America, we get vilified and demonized so much. Was that an image I wanted to put onscreen?” he says. “I thought the script was good. I thought Trey did the best he could to humanize this young man. I always [am] just sort of wary as to whether America and the world-at-large is willing to go on that journey with us.”

Brown relayed his reservations to Shults, and notes the director’s “egolessness” in taking them into consideration, but it was his soon-to-be son that sold him on joining the cast.

“Kelvin and I had dinner,” Brown remembers. “I was like, ‘You know, man, this is a big swing. I just want to make sure. I get as an artist that this is appealing, but once you put something like this into the world, it’s no longer yours. The way people react to it is theirs and they’re entitled to it, and you can’t be mad at that.’ And he’s like, ‘I’m with you. Is this a good role though?’ I said, ‘Yeah, it’s a good role.’ He hit me with, ‘Should I not do it just because I’m black?’ I was like, ‘Aw, shit. You have a point.’”

The effects of familial tragedy run throughout Shults’ work. He cast his aunt in his 2015 debut, Krisha, as a woman who relapses at Thanksgiving dinner. His follow-up, It Comes At Night, was a post-apocalyptic horror movie that helped him deal with the death of his biological father. Those experiences informed the moment he finally began to break the two stories at the center of Waves. “I just lived some things in my life and got to the other side of them and had some perspective,” he says.

For one key scene in Waves’ second half, Shults went so far as to recreate the moment his girlfriend pushed him to travel to out-of-state to reconcile with his estranged father, who was terminally ill. She filmed father and son in the hospital — footage Shults showed to his cast during the shoot.

“We recreated everything my dad was going through and everything we were going through, and how that impacted my girlfriend as well,” Shults says. “It was one of the hardest things I’ve ever done. It’s weird, ’cause it wasn’t until we started recreating that — even talking about it now, it was a feeling of all-consuming dread. It was utterly terrifying. It was the first time I was like, ‘What am I doing? This isn’t healthy. Why am I doing this?’”

Before leaving, Shults details the moment he knew a movie partially based on himself and his pain — and the breakdowns he experienced trying to recreate that trauma onscreen — was worth it. For the entirety of filming in South Florida, the cast and crew experienced ideal weather. Shults describes it as the best summer he’d ever seen in his time living in Florida — until the last day of shooting, when a thunderstorm ruined three scenes featuring Tyler.

The crew stopped shooting. Waves needed to wrap, even if they couldn’t get the footage. Shults didn’t know what to do. His girlfriend passed around champagne in an effort to lighten the mood, and soon the cast and crew ran into the ocean. They were on the same beach where he’d gotten the ideas for Waves years ago.

“We’re all swimming for a while,” Shults says as his eyes grow red and a stream of tears runs down his face. “Slowly, people start trickling out. I remember being one of the last people there, and then I turned around right before I left to look back at the sunrise over the ocean, and all of a sudden I started crying. I felt crazy blessed and grateful and humbled, and then I tried to turn around, and I couldn’t. It was the first time I felt some sense of a higher power.”

The director who made a movie about the sins of the father is unclear where he stands with the heavenly one after his ocean experience. He grew up Christian, says maybe he’s agnostic, and at the least is “very spiritual,” but it’s clear he’s made some type of peace with the two fathers who shaped his life, and their onscreen counterparts.

“I think at the end, I hope the movie feels empathetic and human,” Shults says. “We’re all flawed, and we’re all good, and we’re all just trying to make this work and get through it.”