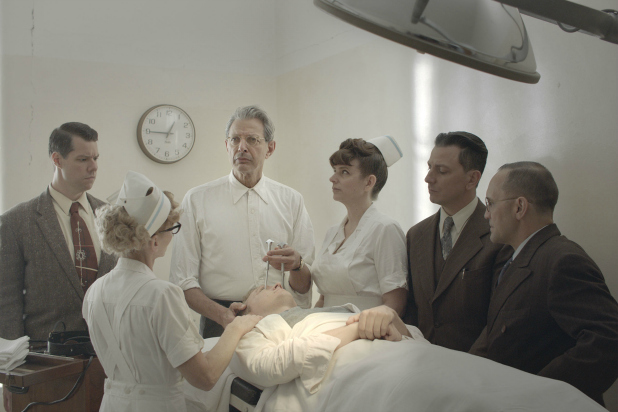 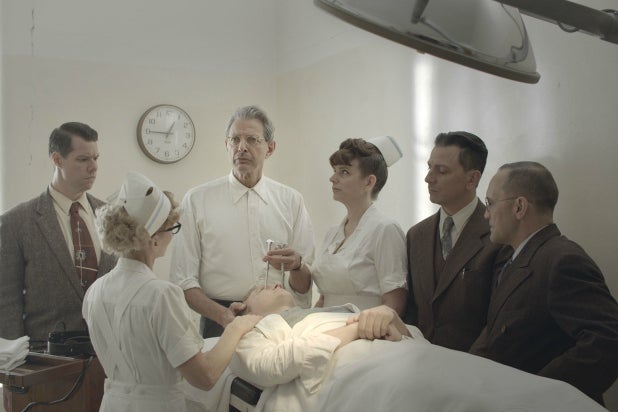 Let’s start here: the latest project from cinematic provocateur Rick Alverson (“The Comedy,” “Entertainment”) is probably best suited for the sort of on-a-loop side room you’d find in a modern art museum, where it could endlessly challenge viewers but give curious wanderers a quick way out if they’ve had enough. Alverson calls “The Mountain” an “anti-Utopian film,” but doesn’t that describe most movies these days? Where his effort does stand out is in its gravely stark, often breathtaking beauty, and its urgent desire to Make a Point.

A cynic might wonder why a filmmaker who vocally disdains popular culture would hire Jeff Goldblum, one of its cultishly beloved icons. But Goldblum more than delivers as Wallace Fiennes, a doctor who travels California performing lobotomies in the mid-1950s. One of his patients is a woman who has been locked away for a long time, leaving her 20-year-old son Andy (Tye Sheridan) adrift and bereft. When Andy’s stoic father (Udo Kier) dies, Dr. Fiennes takes pity and hires him as a photographic assistant.

The pair set off on the world’s most depressing road trip, stopping at various institutions so the good doc can hammer a steel pick into people’s brains. These patients are mostly women, and none of them seem to need any extreme treatment, let alone this one. Instead, it appears that they’ve made their friends, relatives, and physicians uncomfortable, by somehow wandering off a prescribed path. They’re too sexual, or sad, or independent, to exist as is.

Fiennes has started to run into some resistance: more and more, hospitals are choosing medicine over invasive treatment. But he is unwavering in his self-belief, and if one place won’t accept him, he’ll just try another. There will, after all, always be a need to silence certain voices and to elevate others.

This patriarchal deference to authority is the movie’s most salient element, and Alverson (as both director and cowriter) draws it out with care. As shot with stunning surreality by Lorenzo Hagerman, the cold hospital halls, near-wordless scenes, and brief, sterile views of the procedure in “The Mountain” serve as a sort of white-wall gallery, allowing the director’s intentions to stand out with particular power. The production design feels equally meticulous, wickedly daring us to be nostalgic for traditional Americana. And we don’t need histrionics or overt villains to feel a chill; we just need a glimpse of a starch-uniformed nurse or nun silently doing Fiennes’ bidding.

Sheridan’s quiet, passive performance suggests a narcotized blanket of grief and confusion, while Goldblum deftly generates charisma by underplaying (and undermining our expectations of him). Fiennes is jovial and soft-spoken, the sort of person who knows exactly what others need to hear and couldn’t be happier to give it to them. But his soothingly empathetic manner isn’t manipulative; he truly believes that he is helping every one of his patients, and why shouldn’t he? There is nothing in the system that serves as a balance against the dangerous deification of this confident physician.

But once Alverson has ensured that his subtext has been absorbed, he seems uncertain about where to go next. Eventually, Dr. Fiennes is supplanted by Jack, a new patriarchal figure played by Denis Lavant (“Holy Motors”). Jack has requested the procedure for his daughter (Hannah Gross, “Her Smell”), and though he’s more voluble and eccentric, he’s no less in love with his own authority.

So what are we to make of this final statement, which feeds into itself in ways both intentional and unwitting? A parade of sad women has marched by, but none are allowed to develop any particular character. None speak much, or resist, or even seem especially impacted by their abuse. They’re all traditionally beautiful, and many are seen in various states of undress.

They exist, even in the film’s own structure, to reflect the men in their lives: flirting with Dr. Fiennes, comforting Andy, or passively accepting Jack’s cruel egotism. “The Mountain” is, undoubtedly, Alverson’s best and most ambitious movie yet. But by the end, it’s hard to watch Jack ranting so uselessly without wishing his creator had found a way to share some of that power — in the form of onscreen time, or voice, or personality — with one of the many characters who have none.