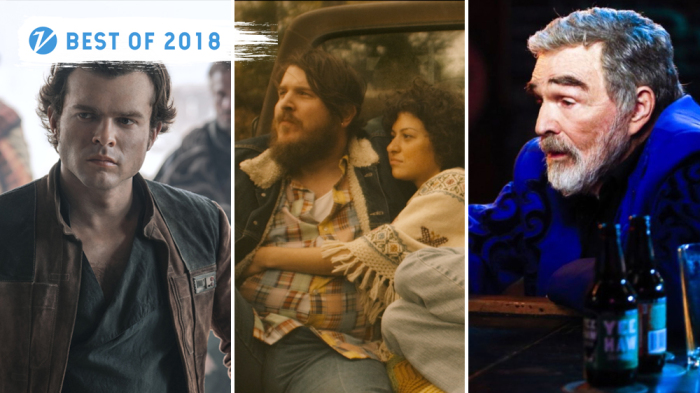 The Most Under-Appreciated Movies of 2018

Some were launched with mega-hype, only to wind up branded as financial disappointments. Others were indie-produced Cinderellas that got lost on their way to the ball. And one was a legendary film maudit that appears well on its way to becoming a footnote.

What do they all have in common? Their inclusion on this list of the Ten Most Underrated Movies of 2018.

Despite a strong Sundance sendoff and scads of glowing reviews for his labor-of-love directorial effort, Ethan Hawke couldn’t get many ticketbuyers to share his deep regard for Blaze Foley (1949-89), a relatively obscure figure in the Outlaw Country movement who remains best known for a handful of songs recorded by other, more famous artists. Those who did join Hawke on his detour off the beaten track couldn’t help admiring his avoidance of traditional musical biopic clichés and conventions, and appreciate musician-turned-actor Benjamin Dickey’s raw and honest portrayal of Foley as a wayward traveler through the long dark night of the soul.

Damien Chazelle’s ambitious and accomplished biopic about Apollo 11 moonwalker Neil Armstrong fared better with critics than audiences — but really should have scored higher with both groups. And there certainly should be louder awards-season buzz for Ryan Gosling’s rigorously implosive performance as Armstrong, persuasively depicted here as a tightly wound enigma who only rarely, and fleetingly, reveals any indication of the emotions he tamps down through sheer force of will. Maybe if Gosling had cracked a few jokes, or periodically munched on the scenery, there would be more talk of glittering prizes in his future?

Just as the 2015 Robert Gordon-Morgan Neville documentary “Best of Enemies” proposed that the coarsening of political commentary began with the 1968 prime-time clashes between Gore Vidal and William F. Buckley, Jason Reitman’s intriguing drama suggests that the tabloidization of political news coverage started with the 1987 scandal that scuttled Gary Hart’s presidential campaign. Much to their credit, neither Reitman nor lead player Hugh Jackman makes it easy for the audience by simplistically painting the disgraced Democrat as a wrongly persecuted victim. Indeed, Jackman’s Hart comes across as cluelessly complicit in his own destruction because his industrial-strength self-confidence gradually edges into the red zone of willfully blind arrogance: Ultimately, he simply is unable or unwilling to acknowledge the obvious, that the rules of the game regarding a candidate’s private life have suddenly, radically changed. And that, arguably worse, Hart himself has inadvertently accelerated those changes.

Maybe critics would have been kinder, and audiences more receptive, had writer-director Adam Rifkin’s affectingly melancholy comedy opened in theaters six or seven months later than it did — that is, after the Sept. 6 passing of Burt Reynolds, who appears in the hand-tooled title role of faded and near-forgotten Hollywood icon Vic Edwards. By turns ruefully regretful, cantankerously sarcastic and bittersweetly philosophical, Edwards looks back at the exuberant highs and humiliating lows of a lifetime very much like Reynolds’ own during a seriocomic road trip from a third-rate film festival to his youthful stomping grounds — an excursion that occasionally echoes the journey of self-appraisal taken by Victor Sjostrom’s aged professor in Ingmar Bergman’s “Wild Strawberries.” You could argue, of course, that Reynolds simply was playing himself here. But, then again, who else could have played the role so poignantly?

“The Other Side of the Wind”

Why aren’t we still talking about this movie? Why isn’t it popping up on more Ten Best lists? Yes, I know: Orson Welles started shooting it more than 40 years ago — but it finally opened in theatrical release, what, just last month. Doesn’t it qualify for laurels bestowed by critics and industry insiders? Or do most cineastes, even the critics whose notices weren’t merely respectful but downright enthusiastic, think of “The Other Side of the Wind” as an exotic oddity that, whatever its strengths or flaws, started to lose its novelty value the moment it was accessible for public (and Netflix) viewing? Or as Ariana Grande might say: “OK, that was interesting. Thank you. Next?”

Despite winning the top documentary prize at last spring’s SXSW and earning a raft of favorable reviews during the recent kickoff of its theatrical run, Hao Wu’s provocative and unsettling film about China’s live-streaming culture and the online hosts who can attract thousands of gift-giving fans has failed to achieve the breakout success that some other nonfiction features enjoyed this year. More attention should be paid: “People’s Republic of Desire” is consistently fascinating and often joltingly funny as it presents a real-life version of a sci-fi-style scenario, one that immerses you in a brave new world of the future that, for better or worse, already is here.

If you haven’t yet heard of director Megan Griffiths, well, that may not be entirely your fault. Her best films to date include “Eden” (2012), an arrestingly suspenseful yet scrupulously non-exploitative drama about human trafficking; “Lucky Them” (2013), an enjoyable dramedy that showcases Toni Collette’s smashing performance as a self-indulgent rock journalist; and this year’s “Sadie,” a skillfully disquieting drama about a manipulative 13-year-old girl (extraordinarily well played by Sophia Mitri Schloss) bent on making sure her discontented mother (Melanie Lynskey) remains faithful to her away-at-war father. Unfortunately, all three drifted into and out of limited theatrical release without raising the ruckus that was their due. The good news: “Sadie” currently is available on streaming platforms. It’s well worth searching for, so you can catch up with a major talent.

In an era when even traditional Westerns are hard-pressed to reach beyond Redbox kiosks and Wal-Mart shelves to connect with receptive audiences, it wasn’t much of a shock that Jacques Audiard’s audaciously quirky revisionist oater about notorious hired killers was unable to translate critical acclaim into box-office success. What is surprising, and disappointing, is the lack of year-end awards action for John C. Reilly’s ineffably engaging portrayal of Eli Sisters, the level-headed (albeit equally lethal) sibling of itchy-trigger-fingered Charlie Sisters (Joaquin Phoenix). Even as Charlie revels in each new opportunity to increase their notoriety, Eli emerges as a sad-sack romantic who’d dearly appreciate a shot at redemption. Not to diminish Phoenix’s own contribution to the movie, but Reilly’s carefully calibrated performance does even more to link The Sisters Brothers to such idiosyncratic ‘70s Westerns as The Hired Hand and McCabe & Mrs. Miller.

Ian and Eshom Nelms’ nifty and nasty neo-noir melodrama is the sort of movie I often get asked about by students, colleagues, close friends and total strangers after they stumble across it on Netflix. And the questions usually are variations of “What the hell was that? Why didn’t I hear about it before?” Truth to tell, “Small Town Crime” (starring a dead-solid-perfect John Hawkes as an alcoholic ex-cop seeking redemption by solving a murder) did receive fleeting theatrical exposure in early 2018 before it was cast adrift on various streaming platforms. But perhaps it will be easier for this particular film to ultimately attract the cult it merits if viewers discover it by happenstance, and are pleasantly surprised by the unique qualities of what I described in my original Variety review as “a seriously down-and-dirty crime story with a savage sense of humor.”

Sometimes I envy the moviegoers of an earlier, less plugged-in era who weren’t privy to every behind-the-scenes detail of each new release — who didn’t know “Casablanca” started production without a completed script, or George Cukor was fired as director of “Gone with the Wind.” Of course, even if “Solo” had not generated so much negative pre-release press because of its, ahem, troubled production, it still would have had to overcome the resentment of “Star Wars” fans who, for reasons both reasonable and otherwise, felt burned by “The Last Jedi.” Unfortunately, too many people chose not to judge the movie on its own terms as a zippy and exciting Saturday matinee-style action-adventure. And judging from the box-office drop-off from “Last Jedi” to “Solo,” millions of other folks simply didn’t bother to see it at all.

Alfonso Cuarón: How Much Is the Oscar-Winning 'Roma' Director Worth?