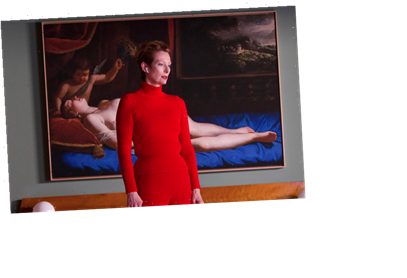 ‘The Human Voice’ Review: We’re All Tilda Swinton in Almodóvar’s Bracing Short — Just Not as Stylish

A freshly minted English-language Almodóvar melodrama starring Tilda Swinton, “The Human Voice” would be one of the hottest tickets at the Venice Film Festival if it weren’t for the small point that it is just 30 minutes long. Still, it’s not size that counts, but what you do with it, and Almódovar does so much in half an hour that it is bound to be rated as one of the Festival’s highlights, anyway. This is the pure, distilled essence of both the veteran director and the actress. For anyone who is smitten by Almódovar and Swinton’s instantly recognisable styles, the film is basically porn. Feast your eyes on those mustard-coloured kitchen cabinets! Bow down before those leopard-print stilettos! Any more than 30 minutes might have been too much to take.

“Freely adapted” from the play by Jean Cocteau, the film begins, after a brief, surreal prologue, with Swinton browsing in a hardware store. (Check out that suitcase-sized black handbag! Place your order for that blue double-breasted trouser suit!) She selects a top-of-the-range hatchet which the worried-looking shopkeeper wraps in brown paper, and then she marches out, pet dog by her side. It’s safe to assume that she isn’t planning to chop up any firewood.

For the rest of the film, Swinton is alone with her dog in her unmistakably Almodóvar-ian apartment, as created by his longstanding production designer, Antxón Gómez, so you have plenty of time to drool over the sculptural bookcases, the kitsch ornaments, the Alberto Vargas pin-ups, the apposite DVDs (“All That Heaven Allows,” “Kill Bill”), and the way the orange towels match the tiles in the bathroom. The ingenious twist is that we are also shown the studio soundstage in which the apartment has been constructed. Sometimes we peer down from above, so we can see that the adjoining rooms have no ceilings. Sometimes Swinton drifts off the set and into the bare industrial space beyond, so we can see the grids of wooden panels which are the reverse of those tastefully decorated walls. Perhaps our own cherished homes are as ersatz and temporary as those in the film. But despite the regular reminders that we are watching an elaborate fiction, the illusion snaps back into place whenever Swinton is in the apartment, and her situation seems as real as ever.

It’s apparent, as she prowls around, that she has murder or suicide in mind — probably both. But after she has swallowed a handful of pills — shiny, colour co-ordinated pills, naturally — her phone rings, she pops in her Blutooth earbuds, and has a long conversation with her absent lover. He, it seems, is sufficiently famous for her to mention selling his love letters to the tabloids. She is an actress-model who boasts, with a self-referential twinkle, that she is still in demand at her age. “Clients love my pallor,” she says. “That mixture of madness and melancholy.” After four happy if tumultuous years together, he has walked out on her, and is calling to arrange when he can collect his designer luggage. But because his voice is never heard, the conversation becomes a monologue in which she struggles to explain to him and herself what the relationship means to her and whether she is ready to let it go.

It’s a sharp if slightly caricatured portrait of despair and loneliness — and, indeed, madness and melancholy. Alberto Iglesias’s insistent mystery-thriller score whips up the anxiety, but Swinton has no problem holding the attention on her own with a declamatory, theatrical performance which nonetheless conveys just how desolate she is. Her own human voice is high and lilting. She strains to be positive, but she sounds like a ghost.

Short monologues have their limits, though. You can’t help but wish that “The Human Voice” was longer, with more characters, more Spanish locations, and more of the director’s trademark twists. But the restricted setting is what makes the film so timely and so touching. Almodóvar and his team shot it in two weeks in July, in the middle of the pandemic. Swinton signed up back in February, so it can’t have been planned as a response to the current crisis, but it is poignant now to see someone trapped by herself, trying to make a connection over the phone, and claiming that she has been out to dinner before admitting that she has barely been past her front door. It’s resonant, too, that for her, the world outside her apartment literally doesn’t exist. We are all Tilda — just not as stylish. When Almodóvar offers her a kind of escape, the effect is so bracingly liberating that it’s tempting to cheer. Mind you, if you’ve got to self-isolate somewhere, you might as well self-isolate in an apartment like that.