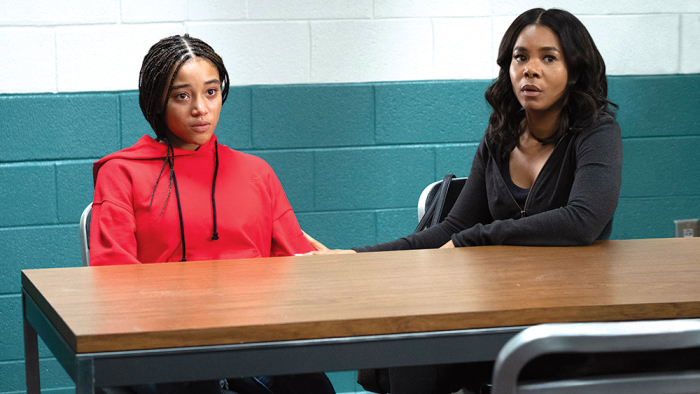 ‘The Hate U Give’ Novelist Reflects on Big Screen Adaptation Process

When discussions of a possible film adaptation of “The Hate U Give” began, I mentally prepared myself to let go.
In some ways, for authors it’s like placing a child in someone else’s hands to raise, nurture and prepare for the world. The key is to place it in the right hands. From my very first conversations with director George Tillman Jr., screenwriter Audrey Wells and later screenwriter Tina Mabry, I knew they were the perfect people to “raise” this adaptation. They not only loved the source material but respected it. Even more, they respected me as the one who initially birthed it.

Over the course of a year, there were face-to-face meetings and phone conversations in which all parties involved
in the scriptwriting process discussed everything with me, from big picture aspects to minute details that may not even be noticeable. Wells specifically yearned to know all that she could about these characters and the world I created, while recognizing that it was a reflection of the world we live in.

Though the characters’ experiences were different from her own, Wells did what writers and, honestly, society as a whole must do — she listened intently and made it her goal to understand as best as she could. Her genuine empathy and love translated beautifully into the screenplay. Combined with the nuances and voice provided by Mabry, the final script proved to me that I truly did place the adaptation in the best hands possible. Collectively, our goal was for the adaptation to have so many of the same genetics as the book that, while they not be identical, at first glance they would seem to be. Every decision was handled with care, and the changes that were made were so profound that I honestly considered making those changes to the book.

The ultimate hope was to create a script, and later a film, that would spark conversations, build empathy, and give voices to those who are so often silenced. Even more so, we hoped to capture a moment so that years from now, when people look back and watch “The Hate U Give,” it will give them an understanding of where
we were at that time as a society and that ultimately, it will inspire them to create an even better future.

“The Hate U Give” novelist Angie Thomas’ next book is “On the Come Up.”