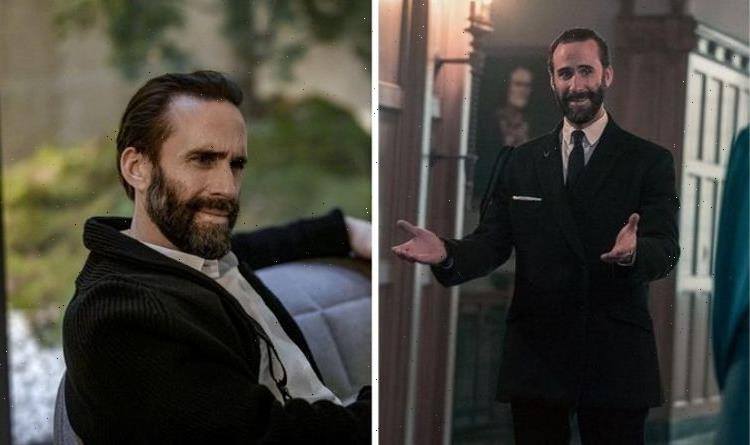 The Handmaid’s Tale: Fred Waterford star on what he really thinks of on-screen wife

The Handmaids Tale followed the life of June Osborne (played by Elisabeth Moss) as she tried to escape Gilead. It was a patriarchal society established by Fred Waterford (Joseph Fiennes) and his wife Serena Joy Waterford (Yvonne Strahovski). As the release of season five approaches star Joseph opened up on what he really thought about Serena and the actress behind her character.

As viewers watched Hulu’s dystopian series, there were plenty of flashback scenes which provided an insight into how Gilead came about.

It also portrayed a different look at Fred and Serena’s relationship before the state completely took over.

Serena was an author and had written a novel title A Woman’s Place which stated women should submit to their ‘biological destiny’ as mothers and child-bearers rather than pursue high-powered jobs or fulfilling carers.

When protests erupted at her book tour Fred was there to support, encourage and comfort her.

However, none of these emotion was witnessed in their relationship in Gilead.

Although Serena was afforded the privilege of being a Wife and the power that came with it she was still a woman living in a patriarchal society.

Despite the fact, she was one of the main establishers of the state, she was shut out of all political conversation because of her gender.

Instead, she was banned from reading and Fred became one of the many Commanders, who were in charge of enforcing the laws.

This undoubtedly sparked some animosity in their relationship and they no longer had the nurturing love they had before Gilead.

]In an interview with GoldDerby.com actor, Joseph opened up and revealed his true feelings about Serena as well as Yvonne who plays his wife.

He disclosed: “Well I just adore her and we get on like a house of fire, she’s funny and great fun to be with.”

Speaking on her talent he shared: “I think what I love about Yvonne and what she’s done is made this character so complex,” he added, “certainly what’s fascinating is a feminist piece to have a woman like Serena with all those complexities who has a belief in the puritanical crusade in the Sons of Jacob.”

“Yet as a woman, I’m sure she feels and understands another woman’s pain in regards of living in Gilead,” he disclosed.

“I just thought she brought forth such complexities and always working with her and with Lizzie (Elisabeth Moss) they’ve really raised the bar, for me that brings your game up,” Joseph explained.

Speaking on Fred and Serena’s relationship he shared: “There’s always a spin and something different and she’s constantly mining, they’ve both thrown each other under the bus.”

Fans will remember the scene when Serena decided to give Fred up to Canadian authorities for visitation rights with baby Nichole.

Joseph shared: “I think going right the way back, they did love and support, Fred loved her voice and she loved the fact Fred supported her – it was just that the regime took it away and he didn’t step up

“I love Yvonne. I think she’s extraordinary and has made me a better actor just through working with her,” he concluded.

Although season five’s finale saw the death of Fred, fans believe he will make a return in the upcoming instalment in more flashback scenes.

The Handmaid’s Tale season 4 is available to stream on Hulu in the USA and airs Sundays on Channel 4 in the UK.