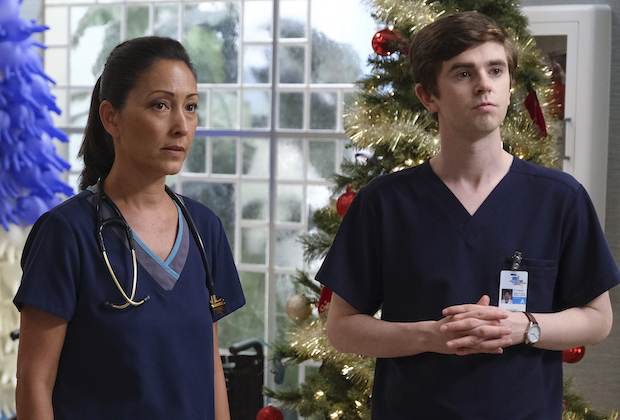 The Good Doctor on Monday closed out 2018 with its most intense episode to date. By the end of the fall finale, a deadly airborne virus had already claimed three victims, including EMT Tyler (played by Cougar Town‘s Dan Byrd). Lim had also contracted the virus, and was passed out the last we saw her. That was one of at least a half-dozen cliffhangers — including, but not limited to:

* Shaun, overwhelmed by the pressures of the quarantine, and deeply affected by the buzzing sound of a florescent light, gave in to his anxiety. He blocked his ears, got down on the floor and shut his eyes. (Somebody get him a turkey sandwich and milk, stat!)

* With Shaun and Lim both incapacitated, Morgan was left on her own, mid-procedure during a combat-style operation.

* Melendez and Claire’s leukemia patient, Chris (played by Fiona Gubelmann’s real-life husband Alex Weed), was in need of a bone marrow transplant. His donor/estranged father Chris remained stuck in the emergency room, unable to get upstairs where his son lay dying.

* Also among those quarantined (and thus susceptible to the virus): Park’s son Kellan, who was suffering from an extreme asthma attack, as well as a pregnant woman (Daytime Divas‘ Camille Guaty) and a diabetic man in hypoglycemic shock.

* Outside the hospital, Lea drove Glassman to his latest appointment, where he got a look at his most recent scans and was able to conclude that his cancer had come back.

Below, series star Christina Chang weighs in on the events of Episode 10, and what viewers can expect when the series returns on Monday, Jan. 14. And yes, she also has thoughts about what happened between Lim and Melendez.

TVLINE | That was one heck of a fall finale!
I know, right?

TVLINE | It was the most depressing Christmas-adjacent episode ever, but in a good way.
[Laughs] I know! And I love the Annie Lennox version of “Silent Night” that plays at the end… It is haunting.

TVLINE | Before we delve into Lim’s fate, or any of those cliffhangers, we need to talk about Lim and Melendez, who just had sex. Did you anticipate that was going to happen?
I saw that coming. I think they were slowly planting seeds… A drink in a bar means something [in a David Shore show]. When you’re in the Shore world, it’s not casual. They’re careful about what they choose to reveal, and how they show characters in and out of the hospital. So, you know, this is not Lim and Melendez’s first drink together. They’ve been referencing that, and of course it can go either way. At the base of everything, it’s still a true friendship, and they have mutual respect for each other’s ability as surgeons, so that is definitely the foundation.

TVLINE | I think many viewers, myself included, caught onto Lim and Melendez’s chemistry at Season 1’s charity gala. The seeds were planted even then.
Mmhmm, exactly. And yes, no matter how fans feel about it, they caught onto it early. [Laughs]

TVLINE | Melendez and Lim agreed that this was a one-time thing, but the look on Melendez’s face when he realizes Lim is quarantined, then among those infected, indicate that there are some pretty strong feelings there. Does Lim feel the same way?
Yes, I know she does. That much I can say. Whether they choose to move forward with that is another topic that I can’t really speak too much in detail about, but they definitely share strong feelings for one another.

TVLINE | It is not looking good for Lim at the end. Not only has she been infected, but she ends the hour passed out on the floor of the emergency room…
Like the drama queen she is! [Laughs]

TVLINE | Obviously you can’t reveal Lim’s fate, but what can you tease about where we pick up in midseason premiere?
We pick up exactly where we left off. Like, seconds later.

TVLINE | For you, not only as a cast member, but as a viewer, which of the many cliffhangers shook you up the most, aside from Lim’s?
There is so much wrong going on, that I remember thinking — not only [do these cliffhangers impact] the series regular cast, but we have some guest actors, and those characters’ lives are hanging in the balance as well. Those people in the emergency room came in for help, and they have things going on, too. So the thought I had was, “How are we going to untangle this mess? And how is Shaun going to get up, scrape himself off the floor and help Morgan, who has her fingers planted in a hole in someone’s body? How are they all going to save lives, as well as themselves?” I’m just as curious to see how they’re going to be able to fix everything in the next episode.

What did you think of The Good Doctor fall finale? And what are your overall thoughts on Season 2 thus far? Weigh in via the following polls, then hit the comments to flesh out your thoughts! (The Good Doctor returns on Monday, Jan. 14.)