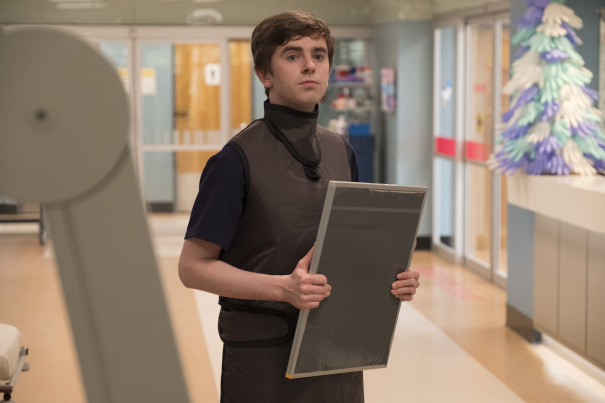 ‘The Good Doctor’ Fall Finale: A Viral Infection Leads To An Outbreak Of Cliffhangers

The intense fall finale of The Good Doctor starts with a surprise love affair and then gets dark with a viral outbreak which leads to lots of lives on the line. It was a very intense episode to end the year.

Early in the episode we see Dr. Lim (Christina Chang) and Dr. Melendez (Nicholas Gonzalez) in bed together after a night of passion — and apparently there are no regrets. Shouldn’t be that much of a surprise as they have been planting seeds for this relationship throughout the season. All is good, right? Well, not really.

When two patients, who were on a flight to Malaysia, collapse outside the airport, they are brought to San Jose St. Bonaventure Hospital and Dr. Murphy (Freddie Highmore) and Dr. Lim tend to them.  Turns out the paramedic who brought them to the hospital is also infected. Bad news: they are infected with some sort of airborne virus that results in a nasty rash. Good news: it’s not a zombie outbreak. Nonetheless, the staff is forced to contained the virus before it reaches the rest of the hospital. They are forced to quarantine themselves in the ER (hence the title of the episode: “Quarantine”) What makes it worse is that it’s the holidays. So it’s going to be a very viral holiday for Shaun and the gang.

This causes a host of problems for everyone. Shaun can no longer take Dr. Glassman (Richard Schiff) to his appointment and Lea (Paige Spara) ends up taking him instead. More bad news: his cancer is back.

Just when you thought this finale couldn’t be any more of a bummer, Melendez finds out his bone marrow donor is in quarantine — and the donor is his patient’s father! The son wants to sign a DNR, but Melendez is not giving up on him. Meanwhile, the aforementioned paramedic dies and Shaun and Morgan (Fiona Gubelmann) are forced to do a bowel obstruction surgery combat style. And to make matters worse, Lim is infected. Yes, you heard that right. Lim is getting weaker and weaker and while she is helping Morgan with the surgery, she passes out and is down for the count. Did I mention that Dr. Park’s (Will Yun Lee) son is also in quarantine and suffers an extreme asthma attack without an inhaler?

Amidst the chaotic scene, Shaun has an anxiety attack while tending to a diabetic patient leaving us hanging with many nail-biting questions that will hopefully be answered in 2019.