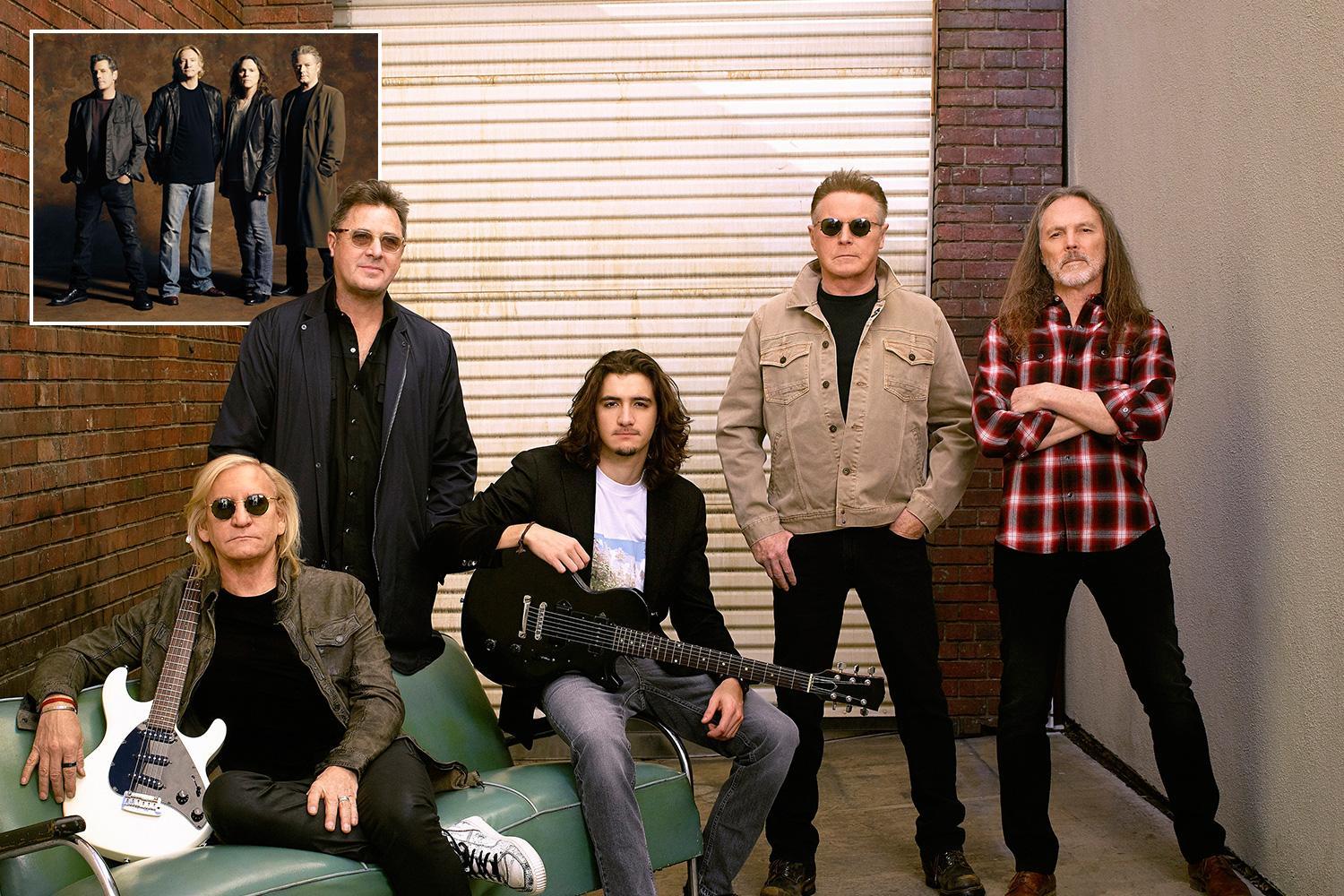 Without the musician regarded, with Don Henley, as co-leader of one of the most successful bands of all time, it seemed their amazing run was over. 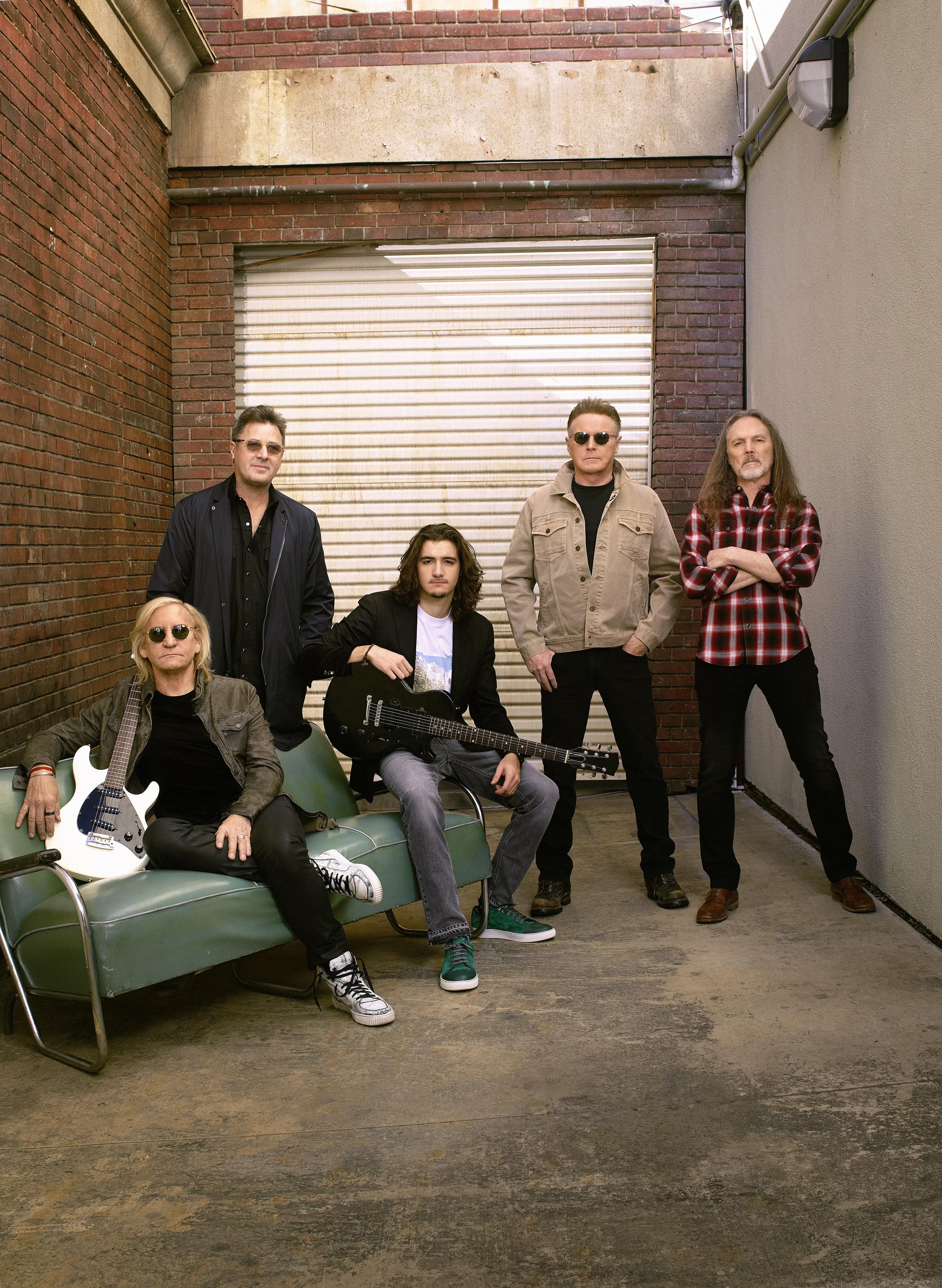 But the West Coast country rockers, famous for One Of These Nights, Lyin’ Eyes and Hotel California, are back after Frey’s 25-year-old son filled the gaping hole in the Eagles’ line-up.

Deacon Frey will sing some of his dad’s iconic songs on the Eagles’ first tour of the UK since Glenn died, starting on June 23 at Wembley Stadium.

“It was my idea to bring Deacon on board and I think Glenn would be good with it,” says Henley, the only founder member left. “It’s been a healing thing for all of us.”

Formed in 1971, the Eagles have sold more than 150 million albums and their music — their Greatest Hits (1971 to 1975) is the best-selling album of the 20th century in the US — has been the soundtrack to many people’s lives. 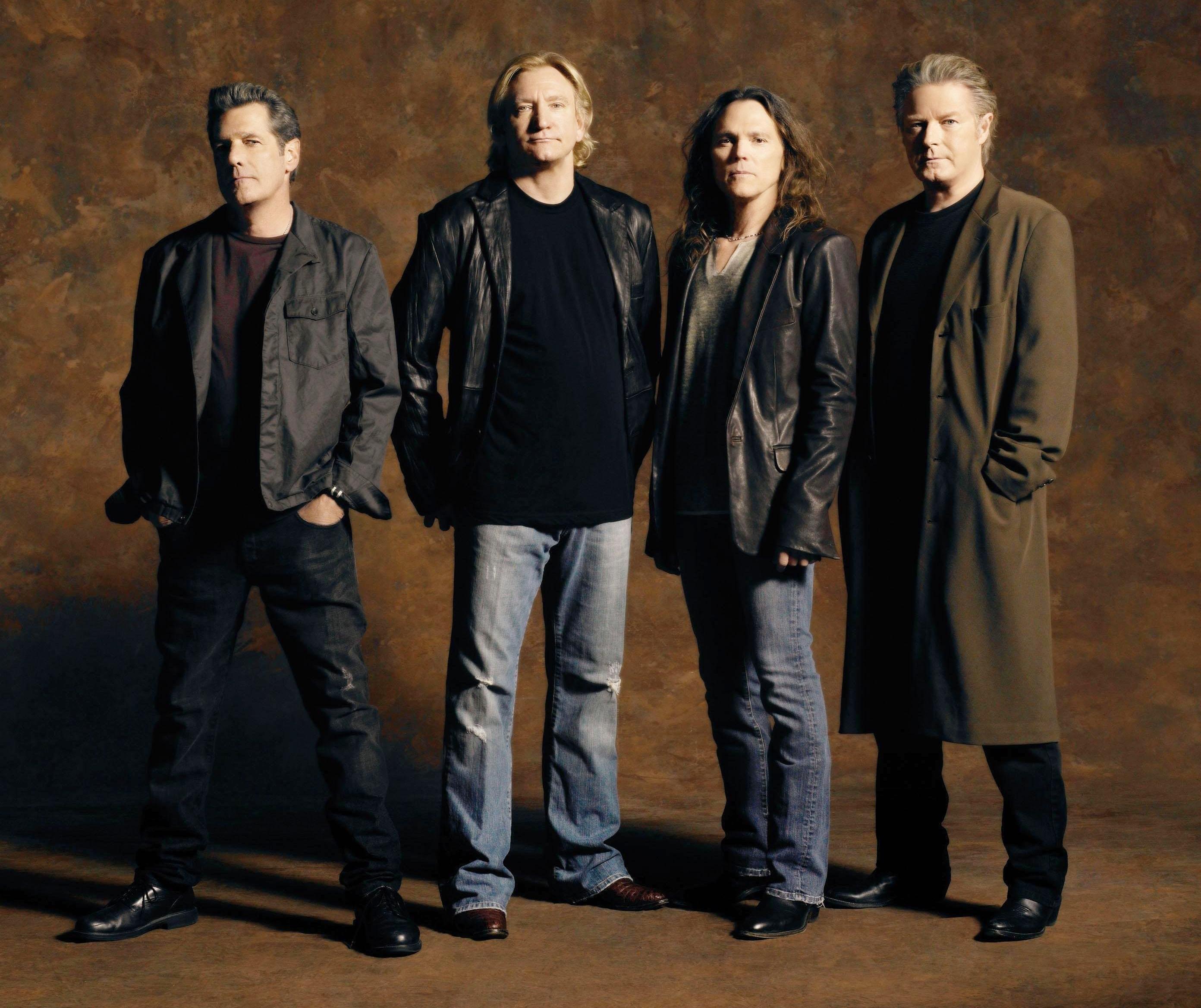 The band survived feuds and fallouts but had their hardest time in the wake of Frey’s death from complications brought on by years battling rheumatoid arthritis and colitis.

Sitting in a hotel in Manhattan alongside fellow Eagles Joe Walsh and Timothy B. Schmit, Henley admits he thought they were finished after Frey passed away.

“I was in shock. I was in mourning and couldn’t see a way forward. I thought: ‘That’s it, we’re done.’ And then a year went by and our manager Irving Azoff said there were still a lot of people who wanted to see the band continue. I said: ‘Really?’ I was surprised.

Schmit agrees: “For a long time, we couldn’t see how to carry on without Don and Glenn.

“And then as time went on, we started thinking more about it and how to do it.”

Walsh chimes in: “The songs have a life of their own. It’s why we’re back out — people wanna hear them.”

With their long hair and casual togs, Walsh and Schmit perfectly fit the bill of ageing rockers — while Henley, dressed smartly and with cropped hair, looks more like a business executive about to take a meeting. Serious and highly disciplined, he is clearly the boss.

Remarkably, they are all 71, though there is some confusion as Walsh insists he is about to be 72. “No, you’re not!” exclaims Schmit. “I can’t believe you don’t know how old you are.” 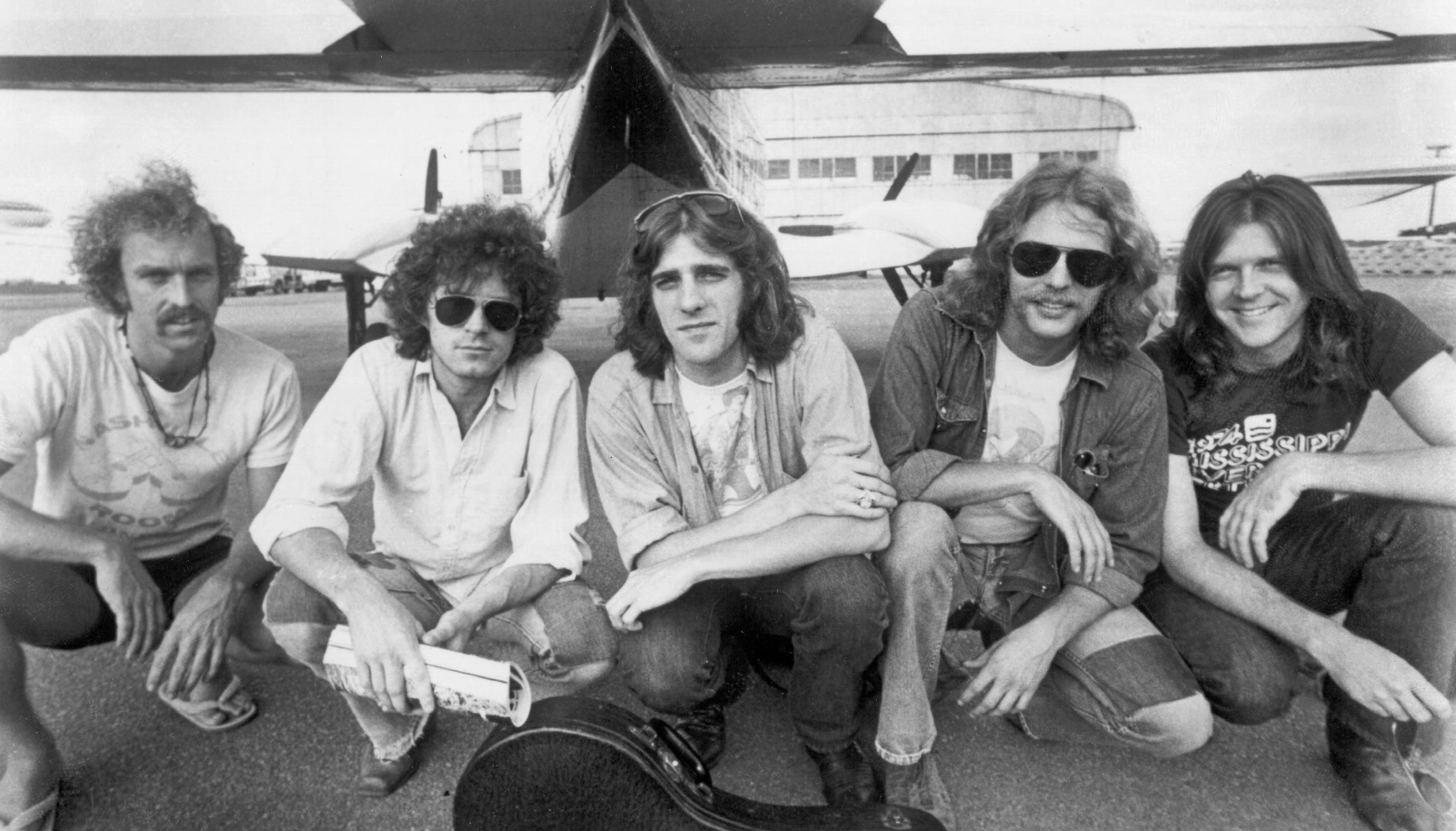 After a good-natured back and forth about birth dates, Walsh shrugs “OK”, and accepts that they are all the same age. As they thought about the band getting back together, the Eagles manager suggested that they recruit country singer Vince Gill, a 21-time Grammy award winner, who was a friend of Frey and who they all admired.

“I thought that was a great idea but it wasn’t enough,” Henley says. “Glenn would be there in spirit but I told our manager, ‘We need the blood.’”

The Eagles co-founder remembered that at the private memorial service for his long-time partner — at which Henley gave a 45-minute eulogy — Deacon performed a beautiful rendition of Peaceful Easy Feeling.

“The image of him singing that song at his father’s memorial service stayed in my mind and when we began talking about putting the band back together, I thought Deacon could do this. He could rise to the occasion,” Henley says. 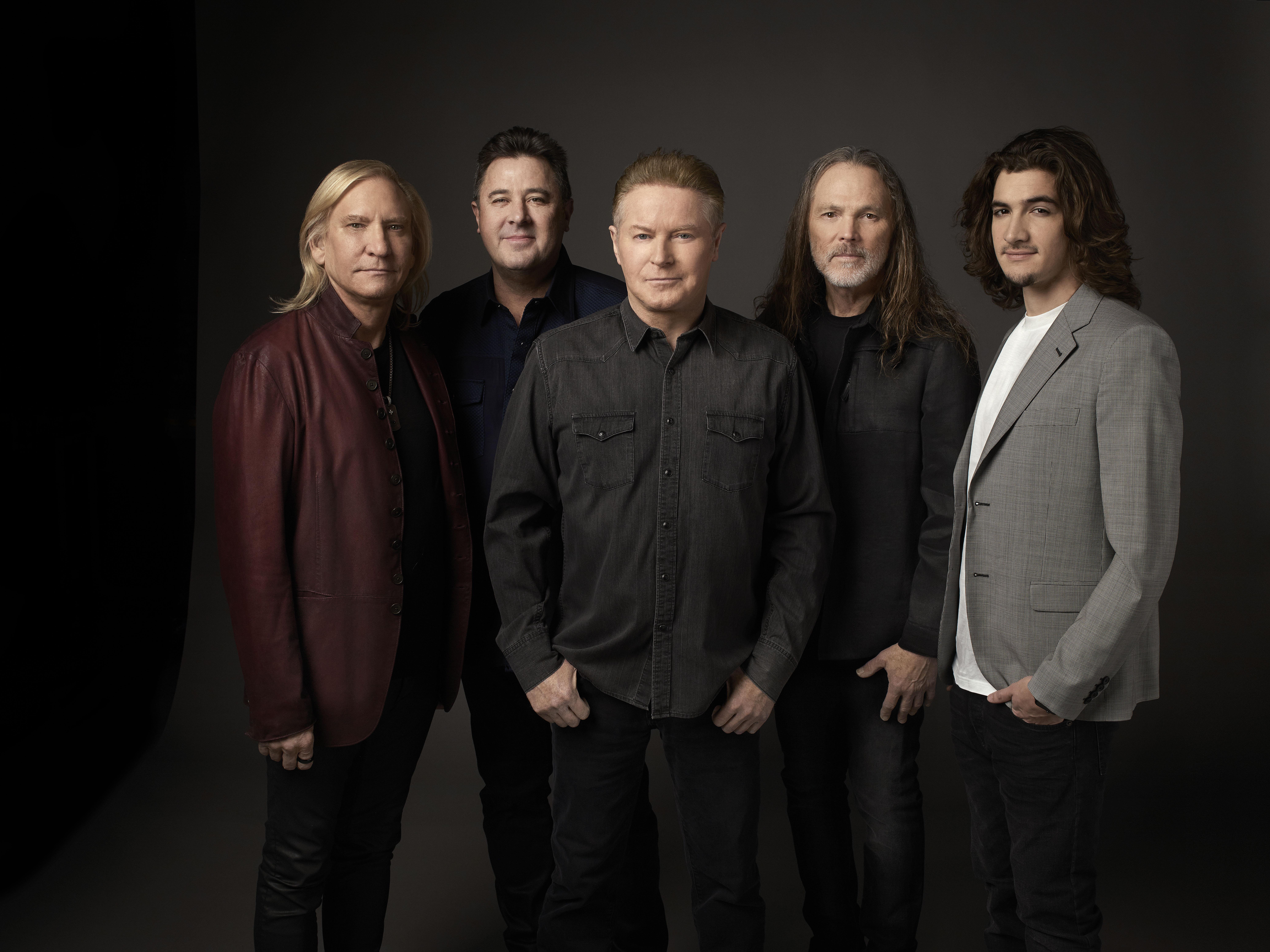 Now both Deacon and Gill share lead vocals on many of the songs that Frey sang with the Eagles.

But weren’t they worried that it was a lot of pressure to ask a 25-year-old to follow in his father’s footsteps?

“Yes, of course,” replies Henley. “We talked to him about it and we talked to Glenn’s widow.

“After some thought, they decided they were willing to try it.” Deacon’s debut was at the Dodger Stadium in Los Angeles in 2017 in front of 55,000 people. 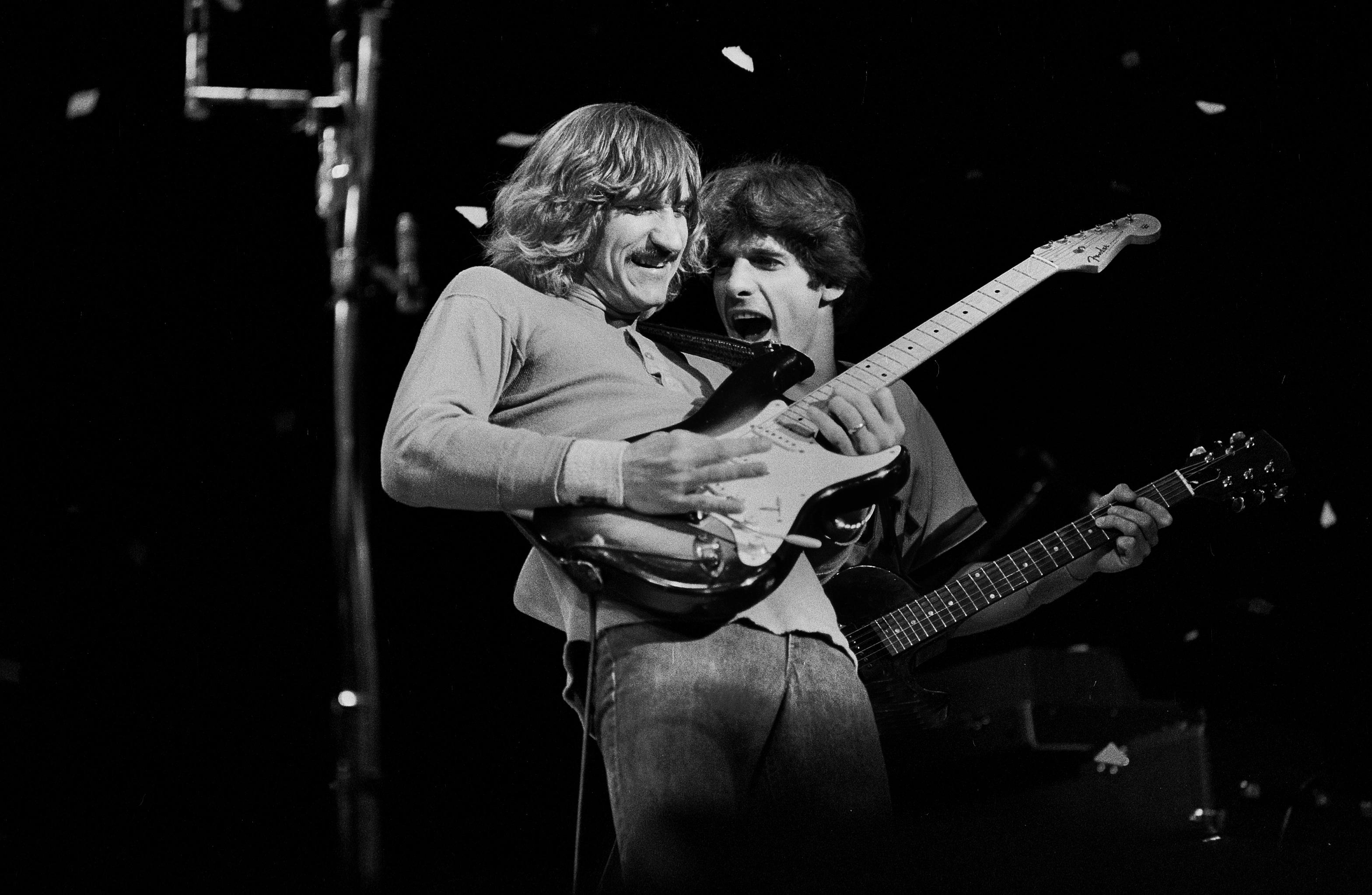 “It was difficult for Deacon in the beginning,” Henley acknow-ledges. “It was emotional for him, but he got through it and he was warmly embraced by the audience.

“They cheered him on and I think that gave him a lot of confidence and brought it home to him that people were glad to see him up there with us.”

Deacon has said in interviews that he grew up singing his father’s songs and that his father encouraged his love for music, buying him a guitar when he was just seven years old.

The younger Frey has grown as a musician since joining the Eagles, says Henley. 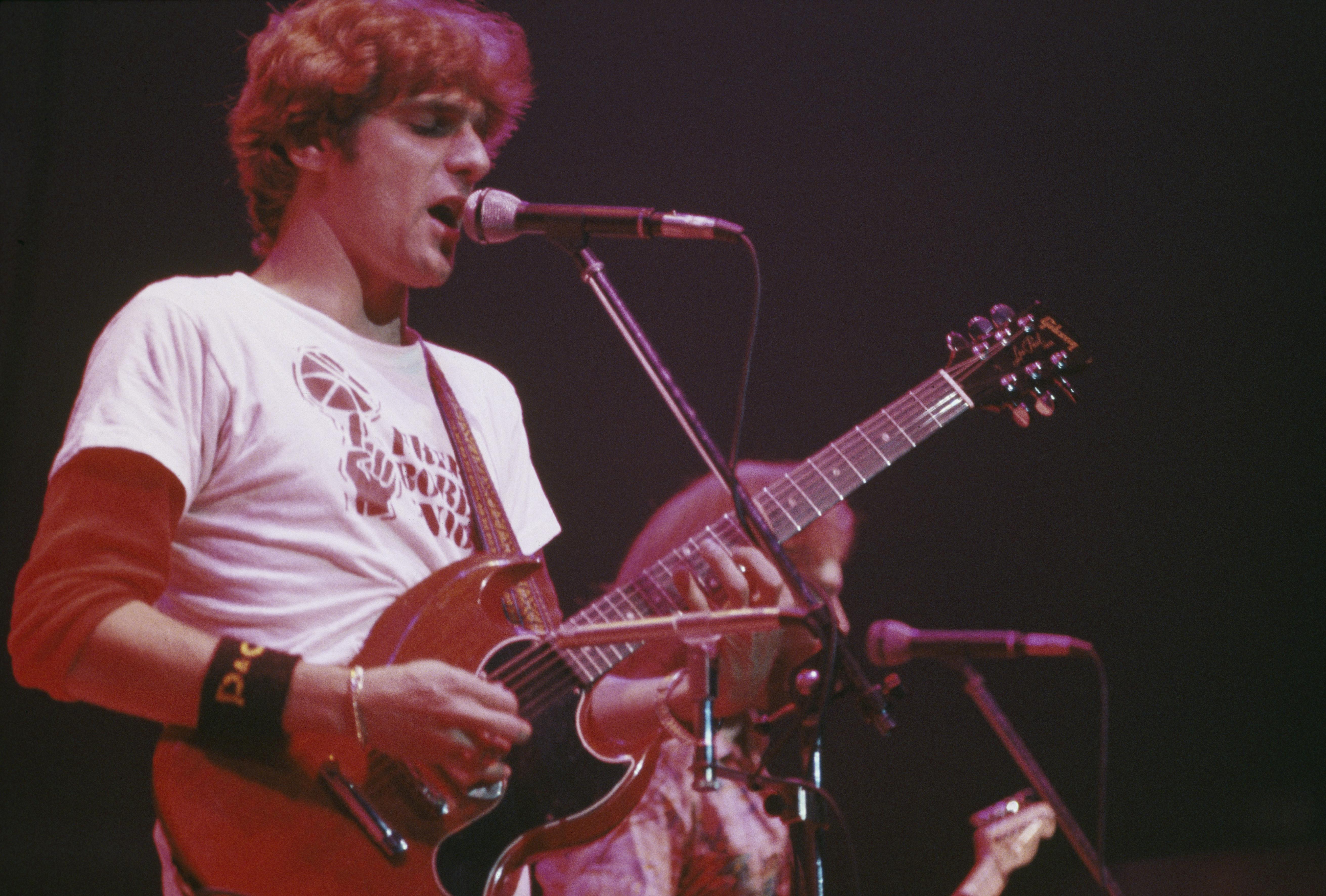 “It’s helped Deacon understand how hard his father works,” Henley continues, momentarily lapsing into the present tense while referring to his song-writing partner.

“He understands the energy and commitment and drive that it takes to do this, and I think he’s getting a whole new appreciation of his father’s work.”

The two key members of the Eagles, of course, had a turbulent relationship after the band was formed in 1971.

“We were very close,” Henley says. “We were like brothers. And brothers fight, brothers disagree. But at the same time, you have an unbreakable bond because of the journey you have made. We had a lot of things in common, we were both blue-collar working-class kids and we were disciplined about our work,” Henley remembers. “We would sit for hours across from one another at a table with legal pads and work on songwriting. 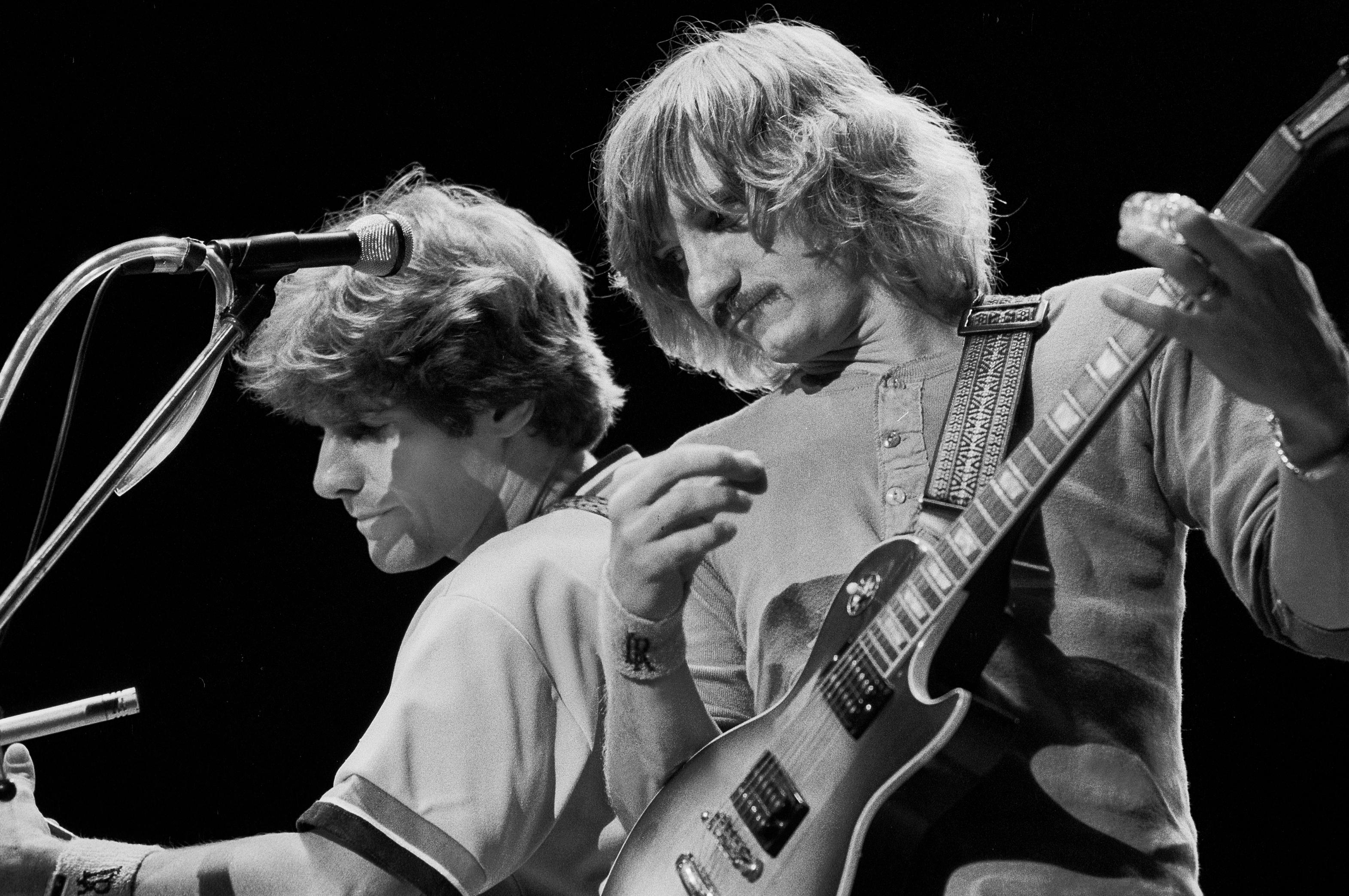 “We listened to a lot of records, dissected them. Talked about what was good, what was bad. I learned a lot about critique from him and from J.D. Souther who was our collaborator on several Eagles tunes.”

The band broke up in 1980 and their cool-down period lasted 14 years. During that time, the band members married and had children and embarked on solo careers.

But radio stations played the band’s songs, keeping the music alive, and in 1994 the Eagles reunited for a Hell Freezes Over tour and album.

How difficult was it for them to get back together? “Song-wise and playing, it was like riding a bike,” offers Schmit. 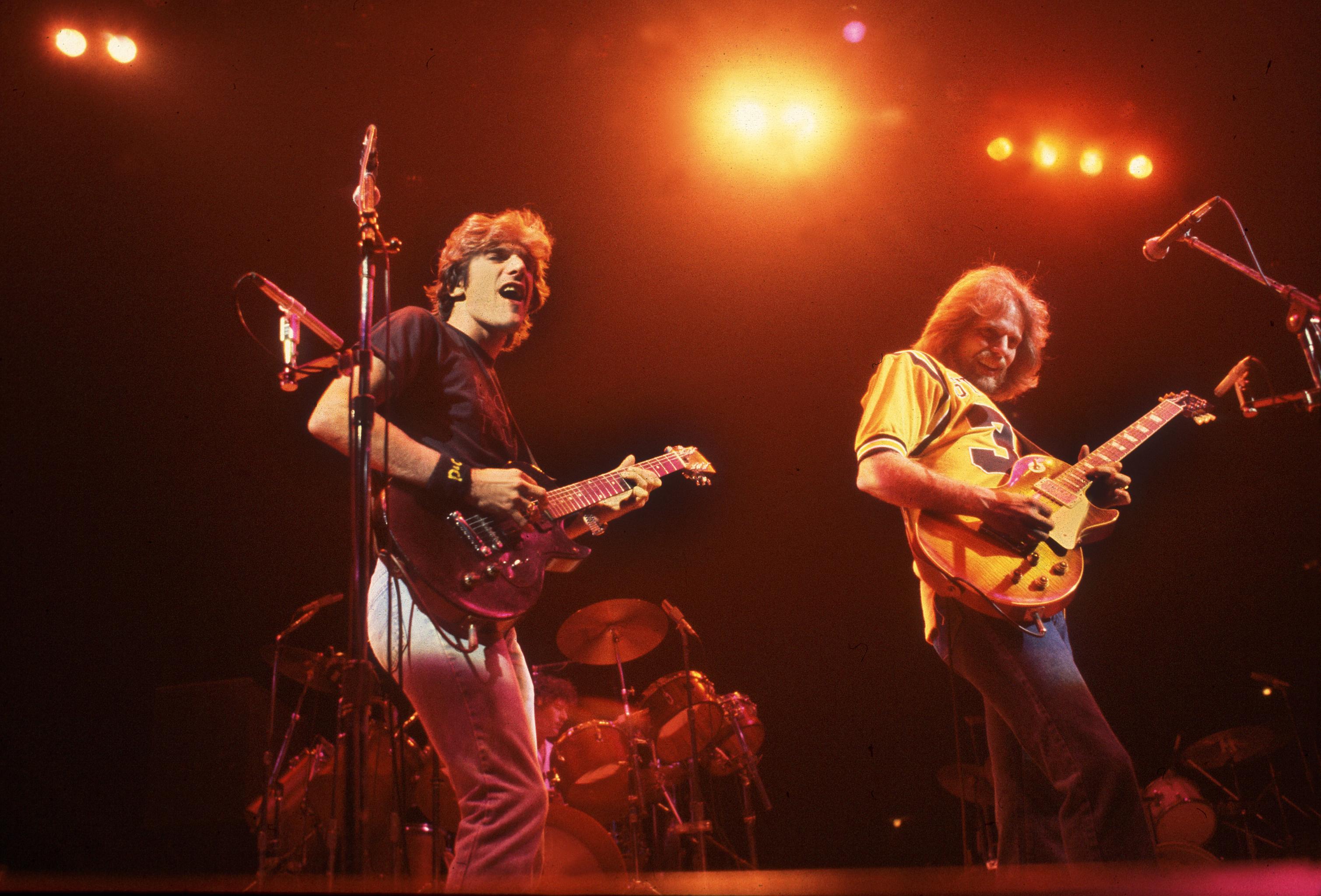 “Learning how to deal with one another again, that required a bit of work,” says Henley diplomatically. “But even though there is conflict and tension in a group relationship, there’s also comfort in the fact that all the weight is not on any one person’s shoulders.

“We were all ready to share the burdens and the joys again at that point.”

Now, with two new band members, the Eagles have found another burst of energy. “They say in life there’s no second act but we got that when we came back in 1994 and now we’re on our third act,” says Henley.

The band had played the night before to an ecstatic crowd at an indoor arena in Connecticut and it was clear their die-hard fans were overjoyed to have them back. 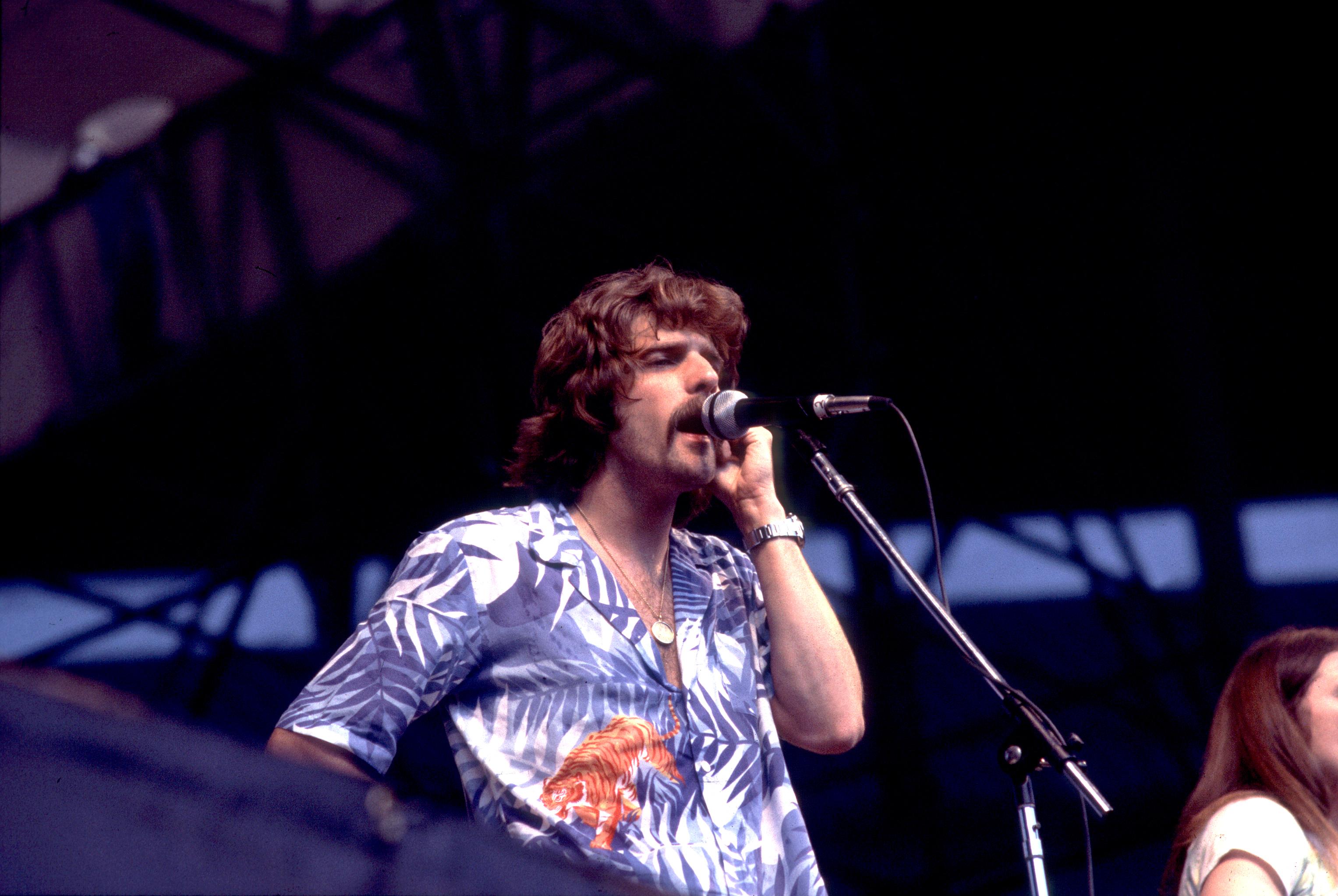 Women, now mothers and grandmothers, got up from their seats and danced to Witchy Woman and Lyin’ Eyes, remembering that once they were city girls who could open doors with just a smile.

Couples, familiar with each other after years of marriage, held hands and sang along to One Of These Nights, remembering their heady first days of romance.

The band was on stage for two and a half hours and no, they did not go back and trash their hotel rooms.

“That was another lifetime ago, in a land far, far away,” says Henley, of the band’s infamous backstage parties, brawls and shenanigans. 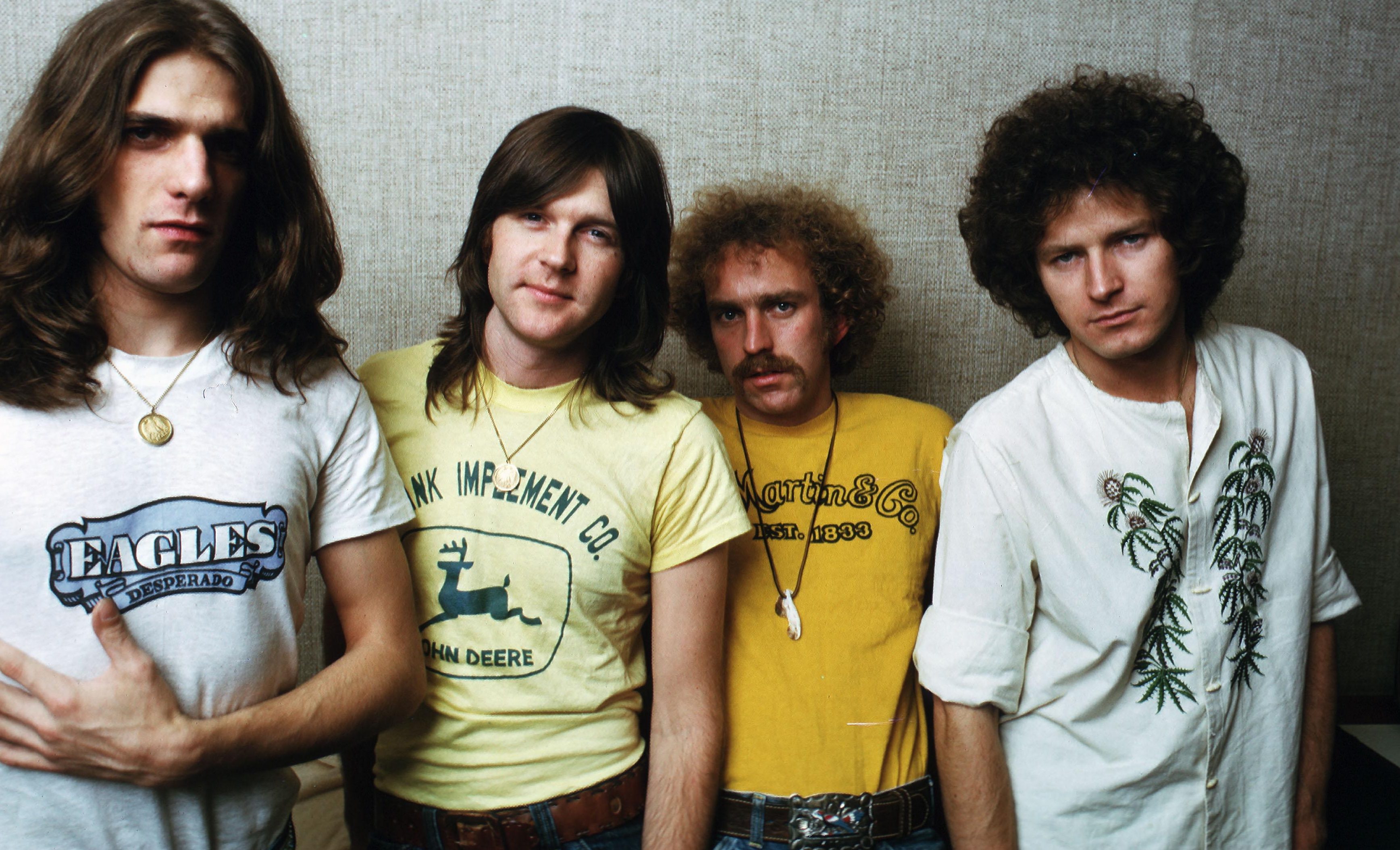 “We were wild and crazy but I don’t remember a lot of it,” shrugs Walsh.

Now that they are in their 70s, the trio’s priority is to keep fit to cope with the rigours of touring.

Henley, pointing to his left shoulder, says: “I’ve got nerve damage here and in my arm from drumming for 55 years and spinal problems.

“It’s not easy. I bring a trainer with me and work out before every show — I ride a stationary bike in my dressing room for 20 minutes to get my heart rate up to about 130, then I do stretching and weights.” 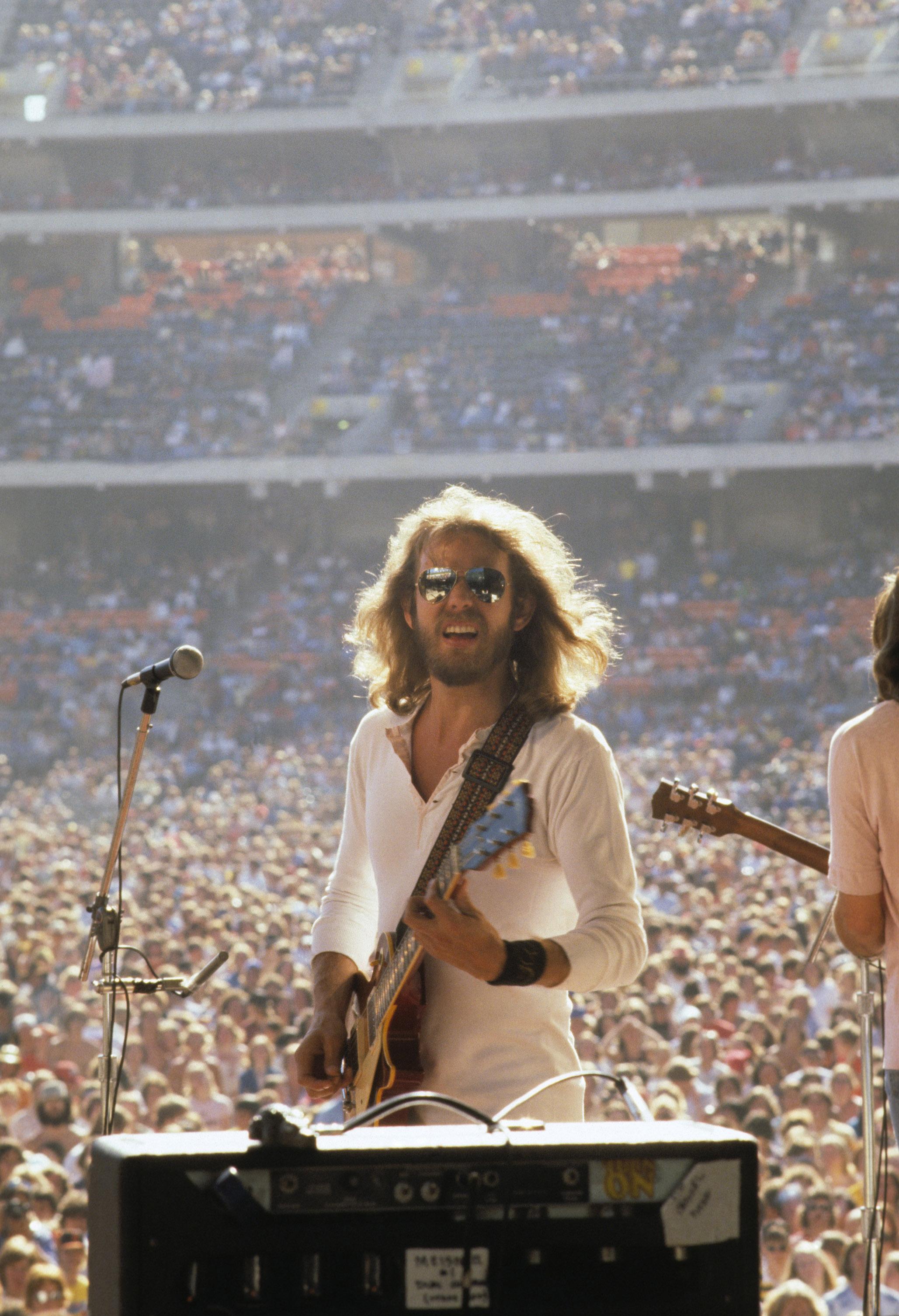 Schmit does voice exercises and yoga and Walsh says that Pilates has helped him after years of playing guitar took their toll.

“My problem was posture collapse,” he says, hunching over an imaginary guitar. I couldn’t stand up straight but now look . . . ”

He springs upright, with ramrod posture like a soldier on guard duty.

Off-duty, the trio have their own interests. Schmit likes to explore whatever part of the world he is in and the band has nicknamed him The Wanderer. 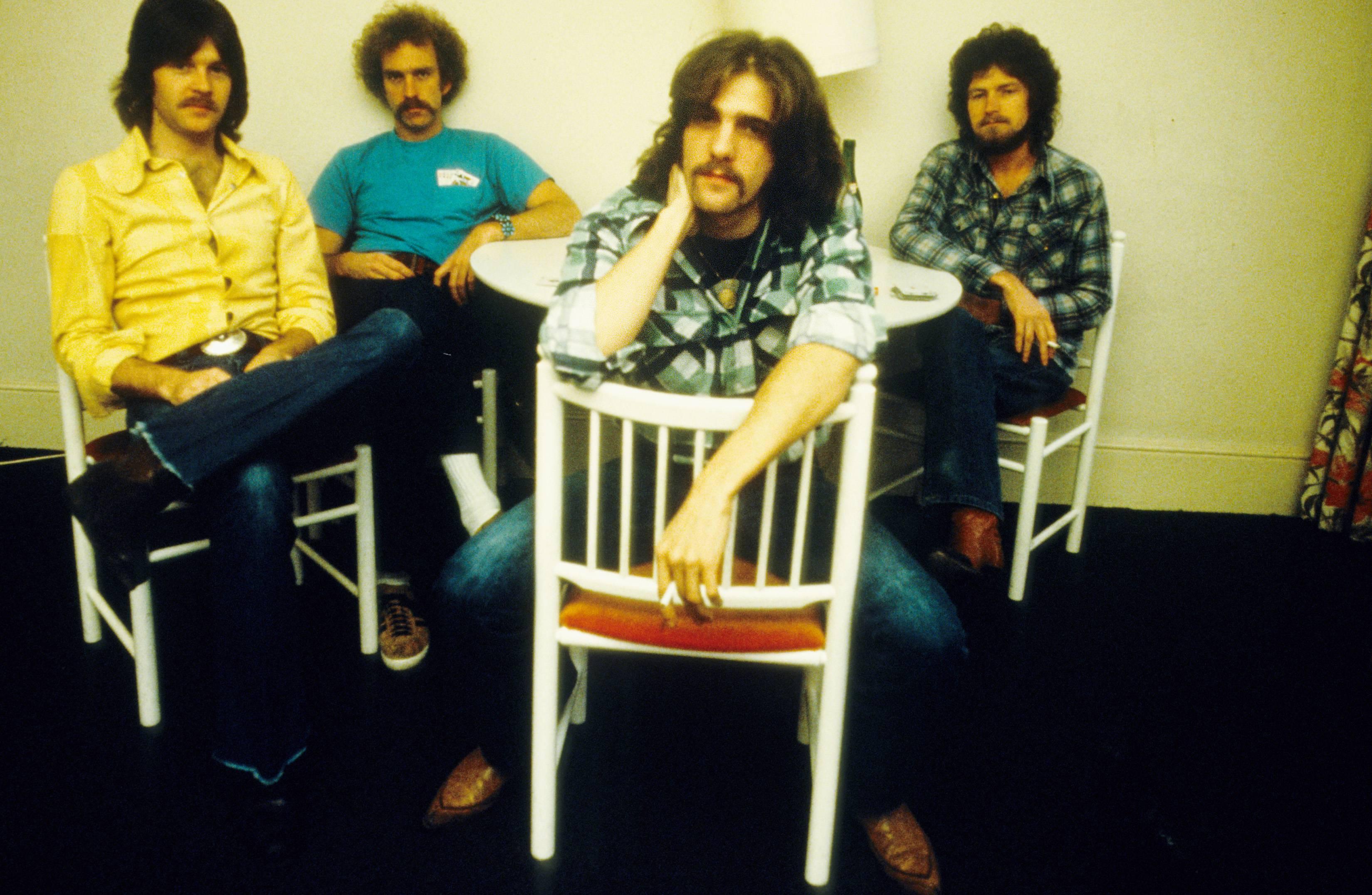 “I’ve been a ham radio operator since 1961 and I love old tube radios and stuff like that,” offers Walsh, who is Ringo Starr’s brother-in-law.

He also dedicates spare time to two charities: Facing Addiction and a charity for army veterans.

“When the Eagles stopped in 1980, that was the end of the world for me. I did not know how to process that and so I just kept going with the booze and the drugs,” says Walsh.

“When Don and Glenn came to me and said they were thinking of trying again, I got sober. I had to get sober. Now it’s very satisfying to me to help others.” 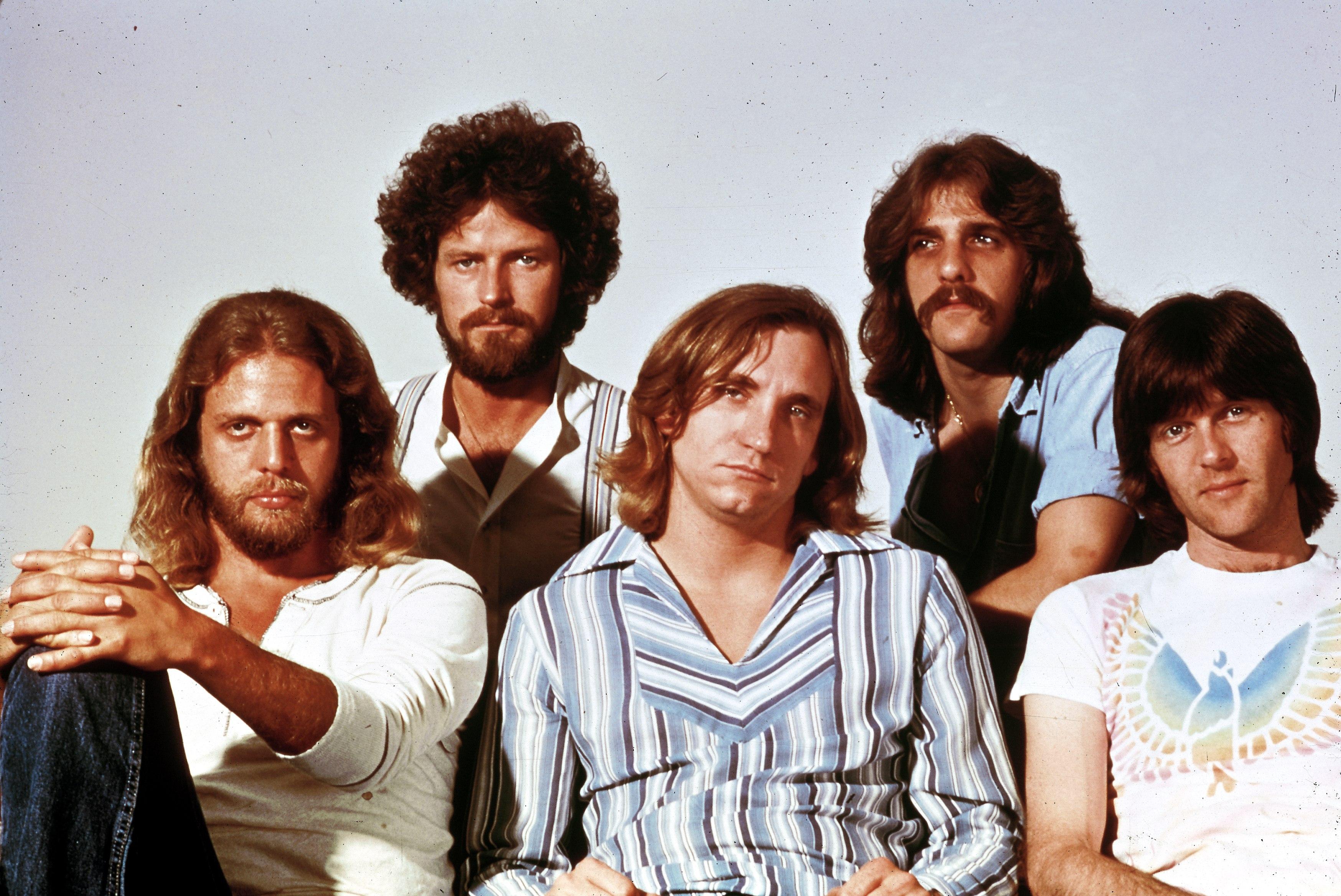 Henley has two environ-mental charities — the Walden Woods Project in Massa-chusetts and The Caddo Lake Institute on the border between Louisiana and Texas, where he now lives.

He also enjoys investigating his family ancestry. “My family started out in Ayrshire,” says Henley, putting on a passable Scottish accent.

“Then they migrated to Northern Ireland and from there to Delaware.”

The Eagles are rich enough to retire, so why go back out on the road again? “We’re not doing it for the money,” laughs Henley. “As wearing and difficult as the touring process is, it helps keep us young. 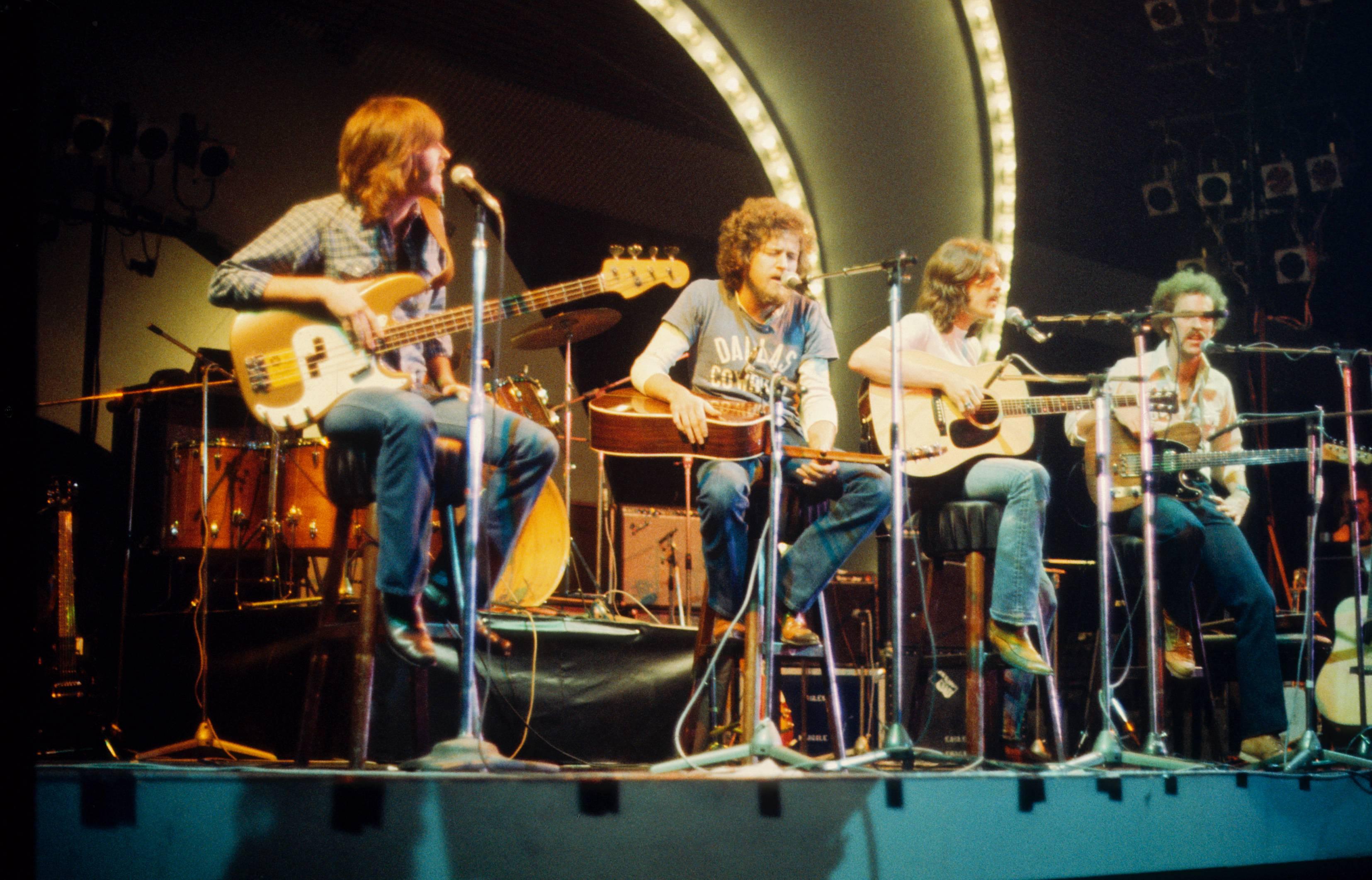 “What are we going to do, sit at home and rot and watch re-runs of Gunsmoke?

“It keeps us vital and it’s great to have new blood in the band. To watch Deacon up there — we’re all uncles to Deacon.”

Schmit adds to that: “We’re musicians. It’s what we do. We’re not ready for the rocking chair.” Nor are there plans for a new album. The Eagles are wise enough to know that it’s the old songs their fans want to hear.

“It’s not about us now, it’s about the songs and staying true to Glenn’s legacy,” says Henley. “We’ve come to appreciate what this music means to people and how it’s the fabric of their lives.”