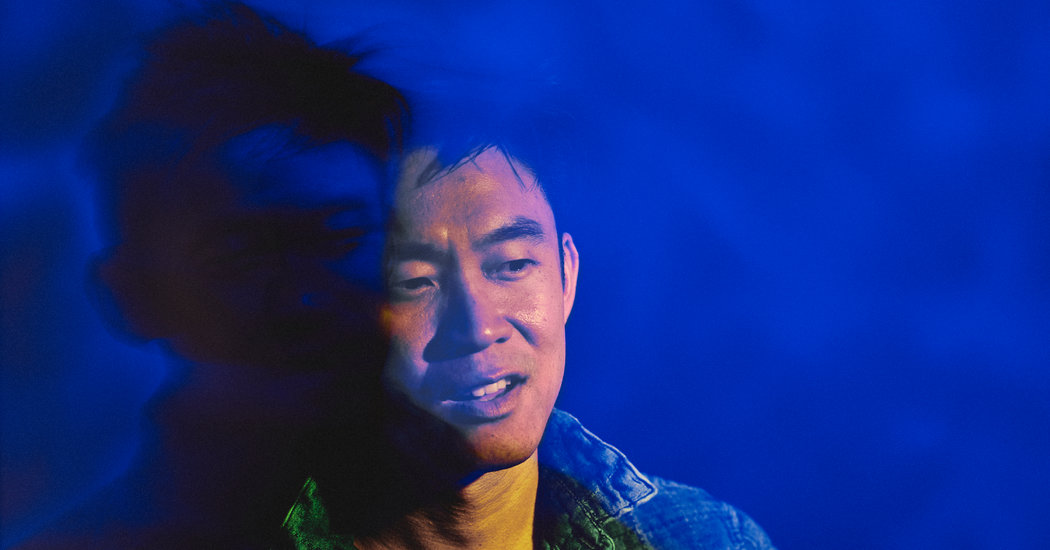 The Director James Wan: If ‘Aquaman’ Doesn’t Work, Blame Me

“Aquaman” is an improbable movie, which in many ways makes James Wan the ideal person to direct it.

The latest chapter in the Warner Bros. series based on DC comic book superheroes, “Aquaman” provides an origin story for this much-maligned undersea adventurer (played by Jason Momoa of “Game of Thrones”) as he teams up with Mera (Amber Heard) against the nefarious Orm (Patrick Wilson) for control of Atlantis.

When it opens on Dec. 21, the kaleidoscopic and willfully offbeat “Aquaman” will find itself bearing the weight of the larger DC franchise, which continues to be perceived as an also-ran to Marvel. Aside from “Wonder Woman,” the series has struggled to find an entry that’s excited audiences and critics, even as it rakes in millions of dollars.

Wan, 41, a spirited, quick-talking filmmaker with a plume of reddish-purple dye in his hair, is used to being an underdog. Born in Malaysia and raised in Australia, he found early success with his genre-redefining 2004 horror feature, “Saw.” But he struggled for years to find a worthy follow-up before re-establishing himself with hit supernatural thrillers like “Insidious” and “The Conjuring.” That led him to mainstream Hollywood blockbusters like “Furious 7” (the seventh entry in the “Fast & Furious” series) and finally to “Aquaman.”

On a recent visit to New York, Wan spoke about the unusual trajectory that brought him to Atlantis and the unexpected pressure now on the film. These are edited excerpts from that conversation.

Aquaman is a well-known superhero, if not a widely respected one. His powers — swimming fast, talking to fish — surely paled next to Superman’s. Was he important to you, growing up?

I did grow up reading comic books, but his books weren’t the ones I read. Later, as I got older, it became apparent that people out there were making fun of him. Sure, he was somewhat disrespected and made the joke of the superhero world. But I always found him endearing.

How did the movie first become a possibility for you?

Having made “The Conjuring,” I was part of the Warner Bros. family, and I knew they were doing their DC thing. I spoke with Kevin Tsujihara [the Warner Bros. chairman and chief executive] at a premiere and I said, “I’m interested in the properties that you have at DC.” A few months later, I was in a general meeting with DC and they floated two properties that didn’t have filmmakers on board: the Flash and Aquaman. 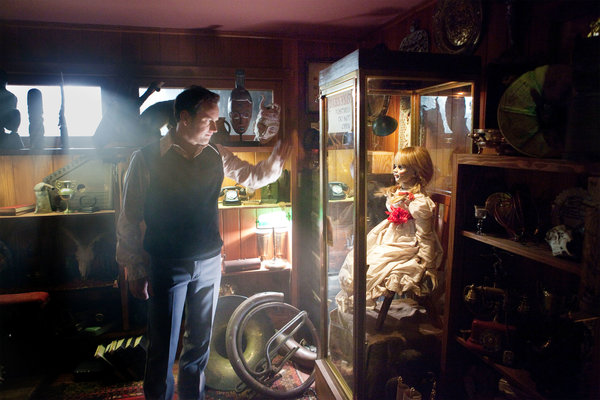 Why did you choose Aquaman?

I felt the Flash had been done before. It had been on TV twice at that point. The one that had not been done was Aquaman. I realized, wow, his character resides in this crazy, big world, and I could do something very interesting with it. I look up to people like Spielberg, Cameron, Lucas, John Carpenter. I’m a fan of genre filmmaking, naturally. So I thought I could make “Aquaman” a genre film, meaning a horror monster movie. DC basically said, yes, you can make Aquaman versus sea monsters if that’s what you want.

How were you selected to direct “Furious 7”? Was that an important step in being considered for other big-budget projects like “Aquaman”?

Believe me, “Furious 7” was difficult to make, if not the toughest of my career. But that movie really allowed people to look at me as a more complete filmmaker.

“The Conjuring” hadn’t come out yet, but Chris Morgan, the producer-writer of the “Fast & Furious” franchise at the time, had seen “The Conjuring” and he loved it. Around that point, Justin Lin was finishing “Fast & Furious 6,” and I think he just needed a break. He wasn’t going to come back to do “7.” So they were kind of scrambling. I talked about what I wanted to bring from my horror filmmaking into the “Fast & Furious” world. By that, I meant I wanted to create suspenseful, tension-filled set pieces. And they were excited with what I had to say.

You broke through professionally with the original “Saw” movie, which seems like every filmmaker’s dream. But what happened next?

“Saw” exploded in a big way and created this big, big franchise. But then I couldn’t seem to get out from under its shadow. I only directed the first one, but my name became synonymous with “Saw” and therefore all the negative connotations — I became the father of torture porn. I went off and did “Dead Silence” and “Death Sentence,” two movies that worked hard to break away from the image of “Saw” and ultimately did not work, from a commercial standpoint. That was two strikes against my name and I’m thinking, am I in director’s jail? All the projects that were coming my way were just copycat projects that weren’t special for me. And so, I just held out. Then my buddy Leigh Whannell and I just thought, screw all this. Let’s go back to our low-budget filmmaking roots. That was when we made “Insidious.”

Were there any lessons from this frustrating period?

I learned what it means to be artistic and commercial at the same time. It made me very aware of the projects I need to do. It needs to be artistically fulfilling, but it needs to have commerciality as well. I’m always walking that tightrope: I know I need to make a movie that works financially, because in Hollywood, that’s how you get your next film.

“Aquaman” is obviously a piece of a larger franchise. Did you still feel you were able to put your stamp on it?

It’s pretty crazy. For as big a movie as “Aquaman” is, I could not have had more freedom. I had all the big tools and the budget to paint on a really big canvas, but with the freedom I had on, let’s say, “Saw” or “Insidious.” So if the movie works, or doesn’t work, I have no one to blame but myself.

Did you have any say in the casting of Jason Momoa and Amber Heard, who were introduced in previous DC movies?

Even though Zack [Snyder] was making “Justice League,” I was kept in the loop by DC and Warner Bros., and they really wanted my input into the two leads. The great thing about casting Jason is, any jokey perception that people have of Aquaman goes right out the window. He completely nullifies any disrespect that people have for this character. Everybody knows how tough and strong Jason Momoa is. I wanted to show people the more lighthearted side of him, the goofy side of him. I worked very hard to pull it out of him, and Jason would be the first to say that I took him out of his comfort zones, quite a few times. [Laughs]

It’s no secret that, though they were commercially successful, DC films like “Justice League,” “Suicide Squad” and “Batman v Superman: Dawn of Justice” were creative and critical disappointments. Did that response affect your approach to “Aquaman”?

I was definitely aware of that. The irony is, I picked “Aquaman” because I thought, here’s a superhero I can make that is fully under the radar. No one’s going to [care] about this film. I can just do whatever I want. Make it easy with no pressure. Fast-forward to three years later and now there’s a massive spotlight on it. So, to answer your question, obviously there was a sense of pressure. But I try not to let any of that cloud my vision for the film. I just plow ahead and continue to make the movie I wanted to make.

So creating an underwater universe that’s vivid and multicolored, that’s not a response to the drab, darker palettes of previous DC movies?

If people go back and watch “Furious 7,” they’ll see how bright and colorful that movie is. Beautiful blue skies, beautiful beaches. People associate me, primarily, with my horror films, and they expect a darker look than “Aquaman.” That serves a narrative that people are trying to get at as well, like I’m reacting to the criticism of these films. My biggest inspiration is actually from the comic book. The comic book is just full of magical creatures and weird and wonderful worlds, and the only way to do an “Aquaman” movie justice is to pay homage to the 70 years’ worth of source material.

There are many scenes that take place entirely underwater, which creates lots of challenges for you. How did you film these sequences?

There really aren’t a lot of visual cues from existing films to pull from. That was exciting for me, because I get to create a new world. In terms of the technicality of it: It was a pain. The actors would be suited up in their costumes, and placed inside these really awkward, uncomfortable rigs. Then visual effects would come in and add the flowing hair, the floating costumes and capes, and then paint in the entire world. A simple scene of two people talking underwater would just take days and days to shoot.

Looking ahead to other DC movies like “Shazam!,” “Wonder Woman 1984” and “Birds of Prey,” what’s your sense of where Warner Bros. wants to take the franchise next?

I don’t know what the bigger picture is. But I think it’s really cool to take chances with the lesser-known characters and story lines. It’s good if all the other films have their own flavor, so they don’t force them to feel the same.

So you don’t necessarily want a role in steering the larger DC movie operations?

It’s taken me so long just to finish this movie. [Laughs] I don’t want to think about somebody else’s movie at this point. I just want to survive this one.

You’re one of very few nonwhite directors who’s been able to make a studio movie at this scale. What’s needed to ensure that other filmmakers from diverse backgrounds get these opportunities?

I think the willingness to take chances on different kinds of films and filmmakers. I never thought, for the life of me, that I would ever see a movie like “Crazy Rich Asians,” where the cast is Asian, and for the movie to do well and be well received, it’s incredible. It starts at the top, the willingness to reach out to these filmmakers and take chances. I get it — when you’re making a movie that’s really big and expensive, they want filmmakers that have proven track records. But there’s really no excuses for not looking at more diverse filmmakers.