Home » TV & Movies » ‘The Devil All the Time’ Review: Tom Holland and Robert Pattinson in a Netflix Drama of Small-Town Sin 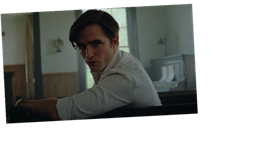 ‘The Devil All the Time’ Review: Tom Holland and Robert Pattinson in a Netflix Drama of Small-Town Sin

Robert Pattinson has a way of making scene-stealing entrances, sometimes midway through a movie, like when he showed up in “The King,” wearing long orange-blond tresses and a twisted leer, as the Dauphin of France, a lewdly dissipated flyweight troublemaker. He does it again in “The Devil All the Time,” a drama of sin and salvation and crime and violence and a whole lot of other heavy Christian noir stuff, set in southern rural Ohio from 1957 to 1965. Pattinson plays a preacher, and the preacher is (of course) a scoundrel, which we know the moment we see him, since he favors powder-blue sport coats worn over open-collared shirts with ruffles, which makes it look like he’s been up all night in a high-school-prom tuxedo. With that patented Pattinsonian flop of hair, and that perpetually pale complexion, he’s like Elvis as an undead apostle.

The preacher, whose name is Preston Teagardin, specializes in fulminating sermons scorched by the fire of sin, his face twisted with righteousness. In other words: Any preacher who gets this high on high dudgeon has something to hide. In a rainstorm, seated in his white finned Chevy along with Lenora (Eliza Scanlen), a dewy and trusting parishioner, he tells her, “To show yourself as the lord made his first children is to truly show yourself to him.” That’s his fancy way of saying, “Take off your clothes.” Later, when she’s pregnant, and she asks him about all the things they’ve done in that car, he says, “You must be crazy coming into the lord’s house and talking all this trash.”

For Pattinson, playing a domineering Bible Belt sleaze is a cred move (a sign that he doesn’t have to be liked), and he does a stylish job of it. But the movie that surrounds him is a long and doughy mystery-dud. It turns out that everyone in the small town of Knockemstiff has something to hide, but we see all the rote dirty secrets laid out like dishes at a potluck (that’s the thing about Netflix lighting — it doesn’t conceal anything). And so the movie, directed and co-written by Antonio Campos, lacks the spark of discovery.

“The Devil All the Time:” is based on a 2011 novel by Donald Ray Pollack, and Pollack, sounding like the defending world champion of a Billy Bob Thornton impersonation contest, narrates it in a night-of-the-living-drawl voiceover that never lets up. You could teach this movie in film classes as a textbook case of telling rather than showing in a way that lulls and numbs. “Lenora,” says the narrator, “had stopped asking Arvin to join her at Helen’s grave. He didn’t mind much. His mind would always drift back to Willard and the prayer log, and his poor dog Jack. Besides, he’d gotten a job workin’ on a road crew, and was busy making some money…” Sorry, but a little of that is dull, and a lot of it is deadly. Campos has such reverence for the novel that he’s illustrated it more than he’s dramatized it.

The hero, Arvin, is eventually played by Tom Holland, who has made a smart move in taking on the role of someone who can kick the s— out of people and blast bullets through them without a twinge. His Arvin grows up in Knockemstiff under the shadow of his father, Willard (Bill Skarsgård), a World War II veteran who teaches Arvin to use his fists in a righteous, make-the-sinners-pay way. But there’s a lot of sin to be cleansed. The town is a hotbed of corruption, along with the kind of Christianity so punitive it creates monsters of repression. People like the bug-eyed Roy (Harry Melling), who testifies in church about how much God has freed him by pouring spiders onto his face. He then marries Helen (Mia Wasikowska), and shows her God’s glory in the darkest way.

There is also a sicko fundamentalist serial killer on the loose. Carl (Jason Clarke), a burly creep, works as a team with Sandy (Riley Keough), a prostitute whose bond with him is never remotely explained; they pick up handsome strangers on the highway, who Carl then coerces into having sex with Sandy, all so that he can photograph the action — and then kill the stranger, which is some sort of cleansing ritual for him. Melling’s spider freak, Clarke’s shutterbug freak, Pattinson’s preacher-stud freak — there are too many heart-of-darkness characters in this movie, as if we’d lose interest without a surfeit of them. All that’s missing is Tim Blake Nelson as a hillbilly gas-station attendant who’s really a cannibal.

The violent kinkiness is everywhere, yet in another way it’s just window dressing. Arvin, a young man who’s good inside, shows each of the sinners what’s what. Yet we never feel too much investment in his odyssey of salvation. “The Devil All the Time” shows us a lot of bad behavior, but the movie isn’t really interested in what makes the sinners tick. And without that lurid curiosity, it’s just a series of Sunday School lessons: a noir that wants to scrub away the darkness.

Supernanny Jo Frost speaks out on having children with husband: ‘Idea seems nice’

Every 9/11 'we need to read those names out loud in person': Frank Siller
World News