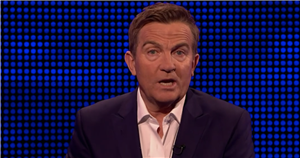 Bradley Walsh snapped at Mark Labbett during Sunday's throwback edition of The Chase Celebrity Special as the quiz champion took a savage swipe at John Craven.

Stella star Patrick was the first celebrity to face the chaser and after beating Mark he added £6,000 to the jackpot.

Cyclist Vicky earned her spot in the final with a £4,000 cash builder round.

However, John had a disappointing round, answering just three questions correctly.

Ahead of the head-to-head round, The Beast star Mark began: "I grew up watching you read the news and now I’ve got news for you."

But host Bradley was less than impressed and hit back: "You can’t say that! That’s John Craven."

Explaining himself, Mark remarked: "I know but fortunately when I’m up here, I don’t have a conscience."

Moving on with the show, despite his unlucky cash builder round, John decided to opt for the higher offer of £70,000.

With an impressive performance, John secured his spot in the final and added the huge sum to the jackpot prize.

Earlier in the show, Bradley's excitement took over as he silenced the contestants when he believed he knew the answer to a particular question.

As the question appeared on the screen, it was clear Bradley knew the answer to the question before he revealed the choice of answers John and Mark had to decide from.

The question posed to the pair was: “What Barry Manilow song was inspired by a Chopin prelude?” with the answers to choose from bing; A. Mandy, B. Could It Be Magic?, or C. Copacabana.

After John and Mark locked in their answers, Bradley was seen running over to the contestant’s table, exclaiming: “I know this!”

“This is the only one I’ve known,” Bradley remarked, before revealing what answer John had locked down, with the host not giving anything away as the correct answer of Could It Be Magic was highlighted.

After the host tried to throw John off the scent by teasing him answer A. Mandy could be the correct one, Bradley was ecstatic when John’s answer glowed green to show he was right.

Kevin was the final celebrity to face Mark and made today’s final chase a full house.

The actor earned £7,000 in his cash builder round but opted for the lower offer of £1,000 to secure his spot in the final.