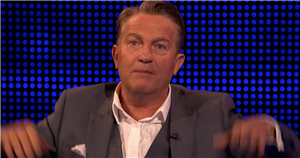 Fans of The Chase were left fuming on Sunday evening (January 22) after they quickly realised that ITV had aired another repeated show.

The celebrity special hosted by Bradley Walsh included the likes of Basil Brush and Olympic champion Matty Lee as they tried their best to win money for their chosen charities.

But although the episode made for entertaining viewing, some spectators who had already seen the programme previously before were far from impressed.

READ MORE: The Chase contestant gets rare compliment from Paul Sinha as he leaves fans speechless

Another chimed: "Advertisers pay which leads to new shows. They play repeats all the funds go to 100% profit,ITV collecting money off the backs of viewers watching repeats. If you think of the backlog of content,we could have something really good. But rights cost money."

A third said: "Weekend and weekday #TV are blending into one with #tippingpoint and #TheChase being on all the time. Less is more. Where the innovative thinking."

But despite the controversy, some were happy that the repeated show aired as TV legend Basil Brush was on the show.

Offering an opposing view, one person wrote: "Not sure if that was a repeat of #TheChase with #BasilBrush but was brilliant and my favourite."

Another agreed: "Much prefer to watch a repeat of Basil Brush on the Chase Celebrity Special than listen to more news of politicians corruption.

While a third echoed: "I know it's a repeat, but #BasilBrush is on #TheChase, and I am beyond happy about this!"

As well as Basil and Matty, composer David Arnold and actress Sunetra Sarker were also a part of the star studded team. All four contestants managed to make it through to the final after facing chaser Darragh Ennis.

But Darragh didn't think the team did enough to beat him in the final chase.

Telling the team they should of answered more questions correctly, things were not looking great.

But in a miraculous turn of events, Darragh was left gobsmacked when the team managed to answer a number of questions correctly, pushing him back as a result.

With only a second to spare, the team did end up winning and split the £19,000 between them.