Home » TV & Movies » The Challenge Recap: Cry Hard — Which Agents Melted Down? And Who Lost Their Shot at the Million Dollars?

The Challenge Recap: Cry Hard — Which Agents Melted Down? And Who Lost Their Shot at the Million Dollars?

The meltdowns were aplenty in this week’s episode of The Challenge, and while some of the sobbing was game-related, the rest of it was just a classic case of the beer tears.

Episode 2 seems a bit early for things to fall apart for the “agents,” but with that much money on the line and a pressure-cooking competition at hand, emotions are running at an all-time high. As the house continued its efforts to snipe out the rookies, a love triangle (of sorts) formed around Nelson that sent Ashley Mitchell into quite a dramatic tizzy. What went down, and who was eliminated? Read on for a full recap.

DON’T MESS WITH MITCHELL | After welcoming Ed to the chaos, the cast dresses to the nines to get their party on, and it doesn’t take long for Tori and Kelz to get fun and flirty. But they aren’t the only couple eyeing each other after all that booty-shaking. As Nelson sneaks into Ashley’s bed, Amanda says: “Ashley is crazy. She’s my best friend, but she will make your life a living hell if you mess with her. So, Nelson, good luck to ya!” And we Challenge fans know she’s not wrong. (Hi, Hunter!) We sincerely hope “Scuba Nelly T” is bracing for impact.

HELI HEIST | In this week’s daily challenge, one partner rides shotgun in a helicopter, tossing bags of gems down to the partner below, who must catch them through a Range Rover’s sunroof. The team to collect the most bags and get to the finish the fastest will form The Agency and be safe from elimination.

Tacha and Jeremiah, and Tori and Corey L. are the challenge’s first guinea pigs. Tori and Tacha let the bags fly, and from the edit, it looks like half of the bags are banked, while the rest bounce off the vehicle’s hood and trunk. The other Cory is up next with his partner Bettina and… wait. Hold up. Did you hear her laugh? That can’t be real. I’ve suddenly found myself very distracted, and yes, I rewound that scene twice.

When it’s Emy and Ed’s turn, Emy reveals a crippling fear of heights. (Welcome to The Challenge, rook!) The duo completes the challenge alongside Tommy and Big T., but it’s safe to say neither of these duos are winning. Emy gets off the ‘copter and has a breakdown over how much she sucked. Cue the tears! (I want to like this blue-haired wild child, but she’s gotta learn to suck it up.)

Before the last heat, TJ announces that Josh’s partner, Lauren, was deactivated from the game. (Again, we’re not told why.) Seconds later, a car speeds up and out steps Big Brother houseguest-turned-Challenge champion Amber Borzotra. Aneesa doesn’t look too pleased, and neither does Fessy, considering the bad blood from last season. Amber tells us she’s not playing nice this season, and she doesn’t care what she has to do to get to the end. Bring it, champ!

The top two teams for the week are Fessy and Esther, and Kaycee and Emmanuel, but the former duo takes the cake, with 30 recovered bags of gems. Fessy in power? Ruh-roh, Shaggy.

MELTDOWN MITCHELL STRIKES AGAIN | With Fessy in power, Josh and the Vets want to target Kelz for elimination. They feel he’s the most capable newbie who could potentially start a rookie revolution. Tori’s feelings for Kelz put her in a tough spot. She knows she’s being tested with this next round of nominations, and she doesn’t want to lose the trust of her fellow veterans. 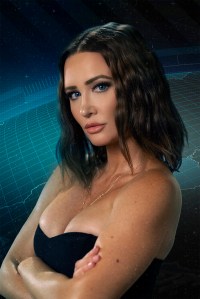 Meanwhile, Nelson’s flirt-mance with Berna causes an intoxicated Ashley to snap. She orders Berna to scram, and soon after, the beer tears are flowing faster than the alcohol did. She’s not into the idea of Nelson flirting with other ladies in the house, and even cops to having feelings for Scuba Nelly. This triangle’s gonna get messy in the weeks ahead, and yes, I CAN’T WAIT. Devin suggests a new nickname for Ash — Meltdown Mitchell — and I am here for it.

DELIBERATION | Josh throws Kelz under the bus, calling him out for making too many promises. Kelz doesn’t take the shade sitting down, and asks everyone around the table if he’s ever promised them anything. He fires back, saying that if he was plotting something, Josh would never know about it. Says Fessy in an interview: “You might not have done the crime, but if enough fingers get pointed your way, you might get blamed for it.”

The Compromised Agents are (unsurprisingly) Kelz and Tracy. “I’m taking everyone’s head off,” he promises as he unfortunately heads straight into elimination.

Fessy hints to Josh that Amber might be the right choice for the female competitor, but Josh pleads with him to not throw her in. (Seriously, does anyone trust Fessy at this point? Dude is forever shady.)

THE LAIR | TJ calls Kelz and Tracy to the sand and then asks Esther and Fessy to make their decision. They play it safe, nominating rookies Emy and Ed. Aaand Emy is crying again. She feels betrayed and “tired.” I am also tired. Of Emy. And it’s only Episode 2.

In Flipping Agents, one team member is strapped to a device. When she is flipped over, the agent must collect puzzle pieces using a magnet attached to a rope. First team to finish the puzzle wins.

Despite Emy’s outburst, she and Ed seem calm and collected, while Tracy gets more and more frazzled with each flip. It’s neck-and-neck for a bit until Emy finally snags her final piece. Ed dominates the puzzle, securing his and Emy’s safety for a week and sending Kelz and Tracy packing.

Then Ed steals Tori as his partner, while Emy snags Devin, leaving Corey L. and Michele to partner up.

Were you sad to see Kelz get burned? Should the Vets trust Fessy? Drop your thoughts below!