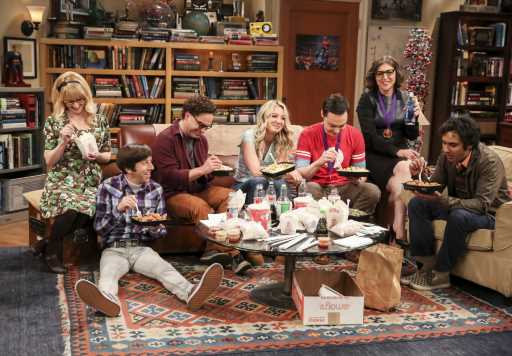 The Big Bang Theory concluded its 12-season run on Thursday with an action-packed series finale (read full recap here) and, not surprisingly, the universe (read: me!) has questions!

TVLINE | Let’s start with the elevator — did you always envision it getting fixed by the end of the series?
STEVE HOLLAND: We’re aware that there are lots of wish lists from fans in terms of what they want to see. And we try not to think about that too much. But we had our own wish list of things we wanted to accomplish, and the elevator working has been on our white board of things we’ve wanted to have happen for a while.

TVLINE | A Season 3 flashback episode revealed why the elevator broke down (i.e. it involved a rocket experiment gone awry), but the finale didn’t offer an explanation as to why it took so long to fix and how it was repaired. How come?
HOLLAND | We talked about, “Do we see workmen? Do we see [Sheldon & Co.] walk up the stairs and not see the caution tape?” But everything would’ve ruined that moment so…
MOLARO | We figured that someone in the audience was going to pick up that the [yellow caution] tape was not hanging across the elevator doors on all the floors, so we worked a little bit to try and bury that fact.

TVLINE | You introduced Howard and Bernadette’s kids after intentionally/strategically keeping them off-screen all this time. How did you arrive at that decision?
HOLLAND | Part of the reason we kept them off-screen all these years was that it saved us from having to have small children on the set, which can be difficult. [Introducing little Halley and Michael in the finale] wasn’t part of the plan originally. But as we were writing that scene where Howard and Bernadette are talking about going to Stockholm and having Stuart and Denise watch the kids, [series co-creator] Chuck [Lorre] was like, “What if we just show the kids now? We’d never have to show them again, so we’re not locking ourselves into anything.” It just seemed like a fun idea. And we tried not to make too big a deal about that moment. We sort of played it off casually [so it] felt like a fun little nod for fans.

TVLINE | What was that casting process like?
HOLLAND | [Deadpans] We put them through a rigorous audition process; we had them come in and do impressions and characters… No, we started with pictures, and we winnowed down to a few that we felt could possibly look like Howard and Bernadette. And I think they brought in a couple different kids and let them spend time with [Simon Helberg and Melissa Rauch]. You always want to see, especially in kids that young, if they are going to [listen to] strangers [and/or] let someone else hold them. And we kind of worked from there.

TVLINE | So, how did the kids behave?
MOLARO | I’m going to politely say that we may have made the right choice not having kids on the show until the last episode. [Laughs] There was a lot of crying on the set from us — and quite a bit from those kids, too.

TVLINE | Considering that Penny firmly declared to Leonard earlier this season that she did not want children, her pregnancy reveal was surprising to say the least. Why did you decide to go that route?
MOLARO: It was important to all of us to find a satisfying landing place for Leonard and Penny. We kept going back to the pilot and that moment where Leonard says to Sheldon, “Our babies will be smart and beautiful.” And that seemed to be a landing place that honored the very beginning structures of the entire series.

TVLINE | Did you ever consider ending the series with an Amy pregnancy instead?
MOLARO | Sheldon and Amy already had enough going on with the Nobel Prize storyline…
HOLLAND | Also, we already know that Sheldon and Amy have children because it’s already been [confirmed] on Young Sheldon. So it didn’t seem like a thing that needed to be addressed.

TVLINE | Was it always the plan to have Sheldon’s emotional, impromptu Nobel Prize speech end the entire series? Or could that moment have also been part of a regular season finale, had the show returned for Season 13?
HOLLAND | We knew early on this season that it was going to be the last season so we didn’t really have to think about what the landing place would be if it wasn’t the last season. But it was always the intention to [introduce the] Super Asymmetry [plot in the Season 11 finale], and [we knew] that that discovery would play a part of Season 12. I don’t know what we would’ve done past that [in Season 13]. But it felt like the right place to land the series. We’ve talked for 12 years about how brilliant these characters are, how brilliant Sheldon and Amy are. And it felt right to [give them a win]. They’ve had discoveries that have turned out not to be true in the past, or things that sort of slipped away because we were always trying to live in the world of real science and not break that world by discovering something that didn’t exist. But this being the last season, we didn’t have to live in this world anymore. So that freed us up to let them have this moment.

‘The Big Bang Theory’ Series Finale: How Did It End?
World News