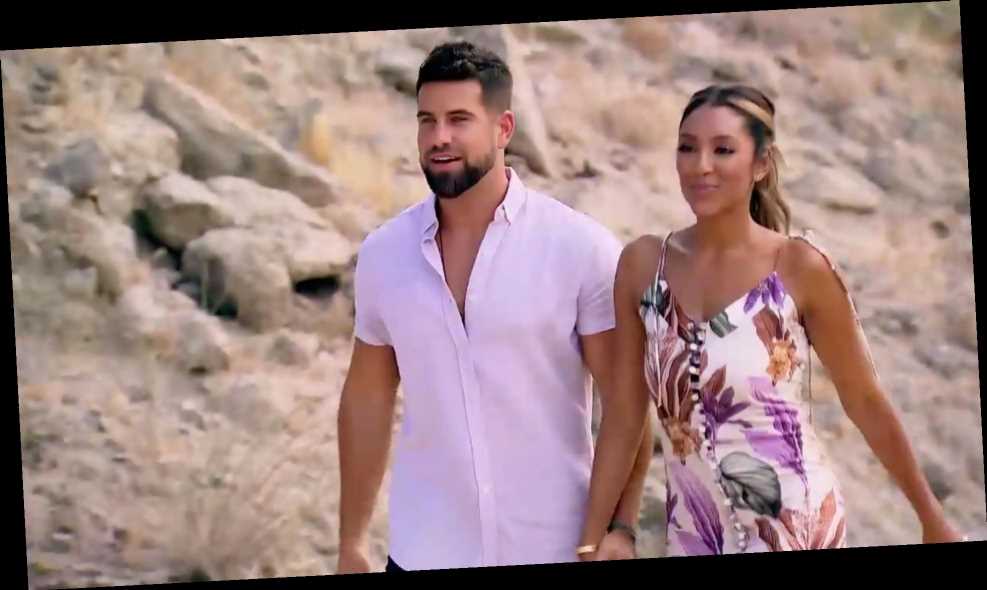 The Bachelorette: Tayshia Picks 4 Men for Hometowns — and 1 Contestant Shocks Chris Harrison at Men Tell All

This post contains spoilers from Monday's episode of The Bachelorette.

Bennett returned to profess his love to Tayshia Adams last week, and she told him she needed the night to think about whether she should let him reenter her dating pool. But before Tayshia could give Bennett an answer, she went on her one-on-one date with Blake on Monday's episode of The Bachelorette.

They met with a reiki and crystal master to get answers about their relationship, and Blake wanted to prove to Tayshia that he's “very, very real and serious.” The duo had their chakras read and did an exercise where they gazed into one another's eyes. That led Tayshia to realize, "I don't think he's my guy."

"When I looked into his eyes, I was looking for more validation and more confidence in the situation," she said in an on-camera interview. "I don’t see it. Maybe that’s why we haven’t really progressed as much as some of the other relationships." After the date, Tayshia told him as much, even though Blake declared he "would be comfortable going into next week" and having her meet his family. "I just don't know if I can get there," Tayshia told the wildlife manager. "It's not that you're not an incredible guy, I just don’t know if, like, the timing was off for us. I think it’s time to go our separate ways.”

Tayshia proceeded to walk Blake to the van and broke down in tears once he pulled away.

The tears continued to flow when Tayshia returned to the resort and told her remaining suitors they "need to talk." Tayshia then pulled Riley aside for a one-on-one conversation.

"Today it hit me like, the realization of hometowns are next week," she began. "And I know how much family means to you and I don’t even want to put you in that position if my heart is not 100 percent matching yours. Because I don’t want to hurt you and I know how much you are protective over that and your heart and everything and I don’t want to lead you on. I'm sorry." Riley didn't see the breakup coming. "I don’t get it. What am I missing?" he asked Tayshia, adding, "Why keep me around so long?"

Tayshia told Riley he waited too long to open up and be vulnerable with her. He ultimately accepted that and left.

As promised, Bennett (in a purple suit!) came back to learn whether Tayshia would ask him to stay and give him a rose, a move that surprised the remaining men. Bennett explained to them that he didn't want to be written off as a “Harvard d-bag” and came back to profess his love for Tayshia. He also said Tayshia gave him a note inviting him to come to the rose ceremony. Host Chris Harrison, back from dropping his son off at college, informed the guys that Tayshia knew exactly what she wanted to do and didn't need a cocktail party. So they skipped right ahead to the rose ceremony.

Tayshia gave the night's first rose to Zac, followed by Ivan and Brendan. That meant Bennett would be going home once again, as well as Noah. Since Ben already received a rose during his one-on-one date last week, he'd also be proceeding to hometown dates.

Before Tayshia will meet the families of her final four guys, the ones she said goodbye to returned to tell all.

Ed and Chasen hadn't settled their feud, and neither had Noah and Bennett. The wealth management consultant accused Noah of only coming on The Bachelorette to "create drama," while Demar and Blake agreed that Bennett did, in fact, talk down to people on the show as Noah suggested.

The big confrontation of the night came when Clare Crawley's suitor Yosef returned to share whether he felt any remorse for calling her "classless" over the strip dodgeball date (that he wasn't on) and asserting that she didn't set "the right example for my daughter."

"I don’t regret sticking up for these guys," Yosef said on Monday's episode.

Even though Kenny and Blake, who participated in the strip dodgeball date, asserted they didn't have a problem with the nudity, Yosef still stood firm. "I have no regrets," he continued. "Everything I said was factually accurate. I don’t think I said anything inflammatory to warrant that response."

Will you accept this rose? Sign up for PEOPLE's free weekly Bachelor Nation newsletter to get the latest news on The Bachelor, The Bachelorette and everything in between!

Chris then asked Yosef if he would stand for a man talking to his own daughter, Zara, the way the medical device salesman spoke to Clare. "If my daughter did something like that, I would hope someone would call her out," Yosef responded.

Appalled, Chris threw Yosef a lifeline and gave him one last chance to apologize to Clare. "I've seen a lot of crazy stuff in 20 years, but that was really not a good look," Chris said to Yosef. "The way it escalated, the way you spoke. But what I would love is if you could just see that and just be like, 'You know what, I do see that and Clare, for that I'm sorry.'”

"I'm not going to apologize to Clare," Yosef said. With that, Chris dismissed Yosef and brought out Tayshia to come face-to-face with the men she bid farewell. Tayshia shared that she got the call to be Bachelorette when it started to become apparent that Clare was fixated on Dale. But, "We still weren’t sure what was going to happen with Clare and Dale at that time," Chris said, referring to when Tayshia first started being considered for the show.

Tayshia reiterated: "Nothing was guaranteed. It looked like Clare had found her love and if it continued to progress, there was still amazing men that were looking for love."

The men went on to express the heartbreak they felt after Tayshia eliminated them. "I spent about 24, 36 hours crying," Bennett said of being ousted the first time.

Blake wondered if he and Tayshia would've worked out if they had more time together. "I kept hanging on that we’d basically blamed it on time," he told Tayshia. "It was never a full-on, 'No, I don’t see this, you’re not for me.'"

Tayshia admitted "time is not the only factor" in their split and the fact that he had such strong feelings for Clare before her arrival made Tayshia hesitant to build a connection with him at first.

Lastly, Riley shared that he fell "way harder" for Tayshia than he even realized. "I was at home for the first week, when I got back, I didn’t move. I felt too bad," the attorney said. "I mean, I don’t open up to people that often and tell them about myself, but you allowed me to be vulnerable and overcome my fears."

Ultimately, all of the men respected Tayshia's decisions, though, and didn't have a bad word to say about her.