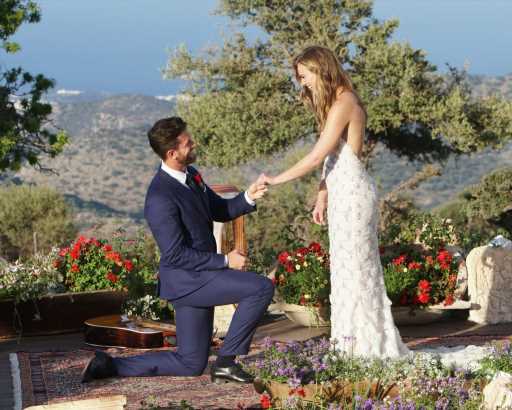 Hannah Brown ended her engagement to her season winner, Jed Wyatt, when she found out that he had come on the show with a girlfriend.

Still, Wyatt maintains that he and Haley Stevens, the woman in question, were never in a serious relationship. But he’s also admitted to telling her he loved her, going on trips with her, and spending time with each other’s families.

In a recent interview with his close friend, Haley Ringo, on LAnded Late Night, Wyatt opened up about his feelings for Stevens.

“I absolutely cared for [Haley Stevens] a lot. She was great. I have nothing bad to say about her. She was always really sweet to me and we had a great time together. There was just no–we knew the show was coming, there was just not a solid enough ground for us to actually have a relationship. Had I actually had a relationship, like I said on the podcast, I wouldn’t have gone on the show,” he said.

But, according to Wyatt, he fell in love with Brown truly and deeply during his time on The Bachelorette.

When Ringo asked Wyatt if he believed Brown “was [his] person,” he responded:

“It felt that way to me. I was sure about it. It felt so right. I’ve never felt so emotionally there. I think that’s why it’s been so hard because I’ve had a hard time letting myself go there for someone. But for her it clicked and I was just blown away that it was on a TV show with other people watching and I didn’t want to lose her.”

“I was being super fearful. Some would say a coward. For me, when I look back on it myself, I see the mistake but it’s just, I was acting so out of fear and I was under all this pressure of everything. The main thing being losing my person, I did not want that to be a thing. I do not want to lose this person. I’ve prayed for this person. This is who I want to spend my life with. I let the fear of losing that person outweigh me loving being like ‘here it is. If you don’t want me I’ll be hurt but whatever.’ I should have done that,” he said.

Miley Cyrus Wanted Her Marriage to ‘Work More Than Anything’