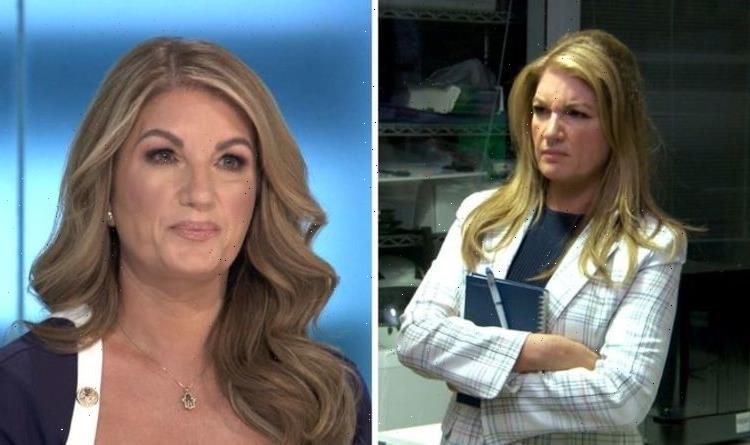 Baroness Karren Brady is one of Lord Alan Sugar’s trusted aides on The Apprentice who keeps a watchful eye over the candidates each week as they compete to win the BBC business show. Karren, who is often dubbed ‘The First Lady of Football’, has become renowned for her cutting remarks to contestants in the boardroom. And former contestant Conor Gilsenan was no exception to being put in his place by the businesswoman after his team lost their challenge.

The Apprentice made an explosive return to BBC One earlier this month for series 16 of the programme.

In the most recent instalment, the candidates had to create an electric toothbrush and app for children aged between six and eight years old.

The candidates were split into two teams and had to come up with a concept, name and app for their toothbrushes.

Despite their best efforts, the boys’ team lost the challenge after securing no orders for their wand inspired product and their app’s character named Wiffy the Wizard.

Ultimately, it was Conor Gilsenan who was fired for being responsible for the failure of the task, and he’s spoken exclusively to Express.co.uk about his nerve-wracking boardroom experience.

Following the task, 28-year-old Conor was brought back into the boardroom by project manager Aaron Willis and fellow teammate Nick Showering.

The former rugby player was unable to save himself, which made him the second contestant to be booted out of the series.

He said: “When you present the product to the expert you don’t see the girls pitching theirs and it all comes out in the boardroom and there’s an element of suspense there.

“We got hammered in the second pitch when they said the product looked like a turd.

“I thought we were pretty screwed at first, but I still thought I did a decent job of leading the sub-team.

“But when we got into the boardroom and saw the girls’ product I thought we were up s*** creek here as their product was so much better than ours.

“But when they played the apps I thought ours had a fighting chance as I don’t think the girls app made any sense.”

Conor opened up on how he dealt with being shut down by 52-year-old Karren after he tried to defend the boys’ team.

He revealed: “It was a bit frustrating as I felt the guys’ app was better. Then Karren Brady cut across me and was like, ‘That’s what you think’, and I’m not going to challenge her.”

Conor said he had great respect for Karren as well as Lord Sugar and Tim Campbell and thought it would be best to say nothing in response.

On reflection, the former candidate said he understood why he was brought back into the boardroom.

“We all know what we signed up for and there was a one in three chance that I’d get brought it as I made a lot of decisions,” he added.

“If I had my time again perhaps I would have put more pressure on the product team as they were behind the failure of the task.”

The first candidate to be fired was Harry Mahmood following a cringeworthy cruise ship task where the teams had to come up with an advertising campaign for a new destination cruise.

The Apprentice continues on BBC One next Thursday at 9pm.