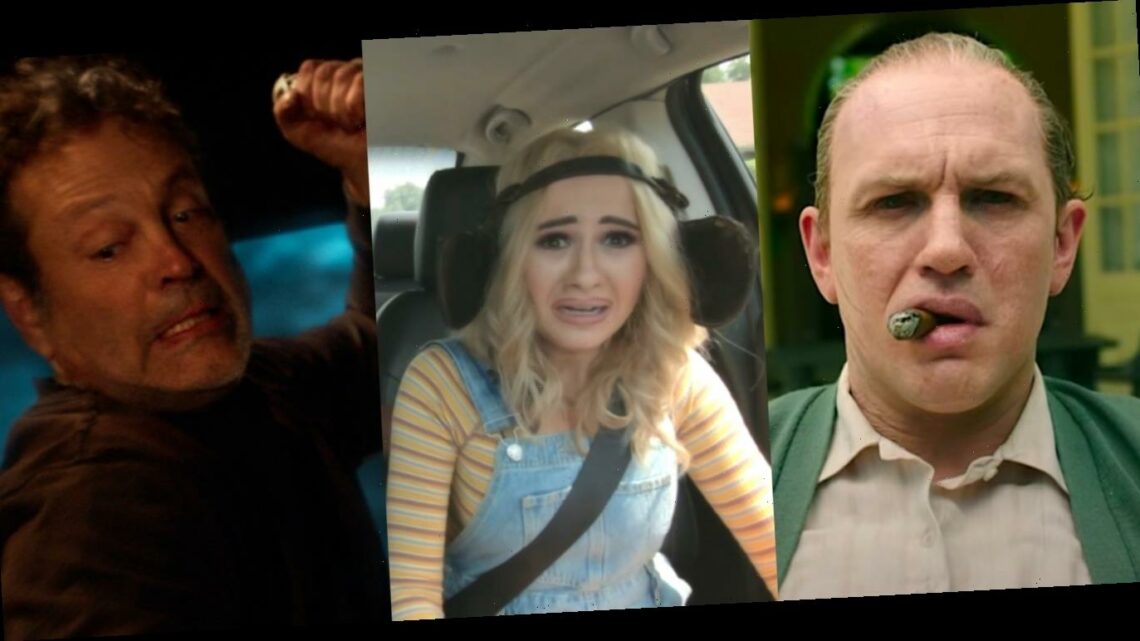 The 11 Most Memorable Movie Performances of 2020

Year-end coverage often focuses on the award-worthy contenders. While 2020 featured no shortage of Oscar potential, what’s most notable about the performances this year was the element of surprise. Unexpected breakout roles, actors that chewed scenery like no tomorrow, and daringly bold choices resulted in many unforgettable characters that brought immense joy and entertainment during a dark period.

Save the award talk for another time; here we’re celebrating the weird, quirky, and remarkable parts that reminded us of why we love movies so much.

Capone actor Tom Hardy goes full method for his portrayal of the infamous and dying gangster. Under thick prosthetics and an aging makeup mask, Hardy imbues his invalid character with a dying croak and his trademark mumble. The actor fully commits to every step of his character’s deterioration. Capone executes an alligator; he sings “If I Were King of the Forest” along with the Cowardly Lion during a screening of The Wizard of Oz, and he runs across the lawn in diapers while gunning down his loyal staff. However, the crowning achievement comes when Capone’s stroke means he’s unable to smoke cigars anymore, and his doctor swaps them out for carrots. Cue the vacant stares and the drooling while carrots dangle from scowling lips. It’s as baffling as it is mesmerizing.

The announcement of this new adaptation of Roald Dahl’s classic children’s fantasy novel begged the question, how could anyone replace Anjelica Huston’s iconic performance from the 1990 film? Anne Hathaway answered the problem by giving a vastly different take on the Grand High Witch. There’s space at the table for two wildly different interpretations of the source material, and Hathaway’s scene-chewing performance injected manic energy guaranteed to make its target audience giggle with delight. For the grownups, that Hathaway was having a blast bringing this larger-than-life villainess to life was infectious. While the character design is an entirely different story, Hathaway’s portrayal goes full ham in the best way.

Robert Pattinson, The Devil All the Time

Netflix’s star-studded Gothic thriller featured no shortage of memorable characters and moments, yet none could hold a candle to Robert Pattinson’s peculiar take on the despicable Reverend Preston Teagardin. Teagardin appears late in the film as the new, charismatic pastor the impresses his congregation with his pompous persona while sexually abusing minors on the sly. Pattinson makes bold choices in his approach to the character, including forgoing any Southern dialect coaching to concoct a bizarre accent entirely of his own making. The atypical accent would derail an insidious predator into pure comedy relief in lesser hands, yet Pattinson makes it work for his weirdly charming character. Pattinson continues to pick the unpredictable path in his career, and his appearance in The Devil All the Time shows why that’s a great thing.

In this body-swapping slasher, Vince Vaughn pulls double duty as the bloodthirsty serial killer and as the teen girl trapped in a middle-aged man’s body. It’s the latter where Vaughn really cuts loose, delivering an endearing goofball performance that will elicit full belly laughs. Vaughn’s take on a teen girl brings the humor that you’d expect, especially when discovering male anatomy, but surprises with tender moments too. A romantic confession and first kiss in the backseat of a car seal this as unforgettable role and career highlight.

Trying to hold your own next to cinema’s greatest troll would be intimidating by any measure. Yet, breakout star Maria Bakalova effortlessly matches Sacha Baron Cohen in fearlessness when it comes to mining dangerous situations for comedic gold. Bakalova plays Tutar, the daughter of Cohen’s Borat. Tutar follows Borat to America and transforms from a feral teen to a fierce new personality with full agency over her life. That poignant character arch can be credited to the writers, but it’s Bakalova that brings breathtaking bravery to all the bizarre gags the film asks of her. From the menstruation dance at a cotillion to that infamous Rudy Giuliani scene, Bakalova approached it all with confidence, ease, and charm. Borat Subsequent Moviefilm embraced 2020’s “anything goes” attitude, and never is that as evident as it is in Bakalova’s Tutar.

From his first appearance in this threequel, Carrigan’s Dennis Caleb McCoy seems like nothing more than an emotionless robot sent to destroy plucky heroes Bill and Ted. The moment Dennis botches his mission, the façade crumbles instantly to reveal a profoundly insecure being at the early stages of an emotional journey. Much like his turn as NoHo Hank in Barry, Carrigan once again proves to be a masterful scene-stealer with an uncanny talent for physical comedy with heart. Dennis Caleb McCoy becomes the breakout character in his capable hands, an endearing robot striving for humanity and acceptance.

It takes an exceptional villain to hold their own against a vivacious antihero like Margot Robbie’s Harley Quinn. Ewan McGregor was more than up to the task as Roman Sionis. McGregor injects charm and likeability in a textbook narcissist Big Bad, a line that’s not nearly as easy to walk as it may sound. Roman’s easy-going personality belies constant rage simmering just beneath the surface, all tethered by a continual need to be the center of attention. The way the actor plays off of lead Robbie and sidekick Victor Zsasz (Chris Messina) is pure magnetism. McGregor’s having a ball playing the part, too, creating several standout moments that serves up both laughs and genuine stakes. McGregor’s character entertains and menaces in equal measure, the precise type of scene-stealing villain you want to anchor your superhero spectacle.

Netflix’s fantasy actioner brought all the bone-crunching mayhem you’d expect. Based on a comic book, the movie revolves around a group of immortal mercenaries, led by Charlize Theron’s Andromache “Andy” of Scythia. Among her close-knit team turned family members are lovers Joe (Marwan Kenzari) and Nicky (Luca Marinelli), who bring unexpected pathos to a blockbuster action film. Their groundbreaking love story quickly outshines everything else. Kenzari and Marinelli master the fight choreography with ease but match their characters’ combat toughness with poignant moments that convey their love’s enduring depths. If Joe’s angry yet passionate “He’s the moon when I’m lost in the darkness,” speech doesn’t hit you in the feels, you might be dead inside.

Betty Gilpin’s Crystal is a woman of few words; it’s clear from the moment she appears on the screen that she prefers deliberate action over conversation. That’s what makes her an effective and tough-as-nails heroine in “The Most Dangerous Game” inspired horror-comedy. It’s Gilpin’s portrayal, however, that makes The Hunt so deliciously entertaining. From the very moment her character turns the tables on the couple in the gas station, Gilpin keeps the audience entirely in her grip with a wild look in her eyes. The actor transforms an archetype we’ve seen before into something wholly new with a performance that teeters between capable badass and subdued comedian. Sure, Crystal’s physical takedowns of her foes will get your fists pumping, but not nearly as much as her mumbling, low key moments of unhinged humor.

Will Ferrell and Rachel McAdams may be billed as Eurovision’s stars, both playing the central couple seeking fame at the Eurovision Song Contest, but we all know that Dan Stevens is the real star. Stevens’s performance as Russian Eurovision contestant Alexander Lemtov took Netflix’s musical comedy to the next level. The first introduction of Lemtov teases a standard comedic trope- the arrogant rival, both romantically and professionally for Ferrell’s Lars Erickssong. His conventionally attractive looks, along with his banger of a song, “Lion of Love,” presented the perfect if standard foil for the protagonists. Except Stevens didn’t play Lemtov to expectations. While the filmmakers certainly created Lemtov as a fully-realized character that surprises, Stevens brought Lemtov to life through impeccable comedic timing and a nuanced depth that proved the character was far more supportive and vulnerable than his confidence signaled. Stevens’s portrayal left viewers swooning the moment McAdams’s Sigrit woke to discover that Lemtov spent the last six hours braiding her hair instead of taking advantage.