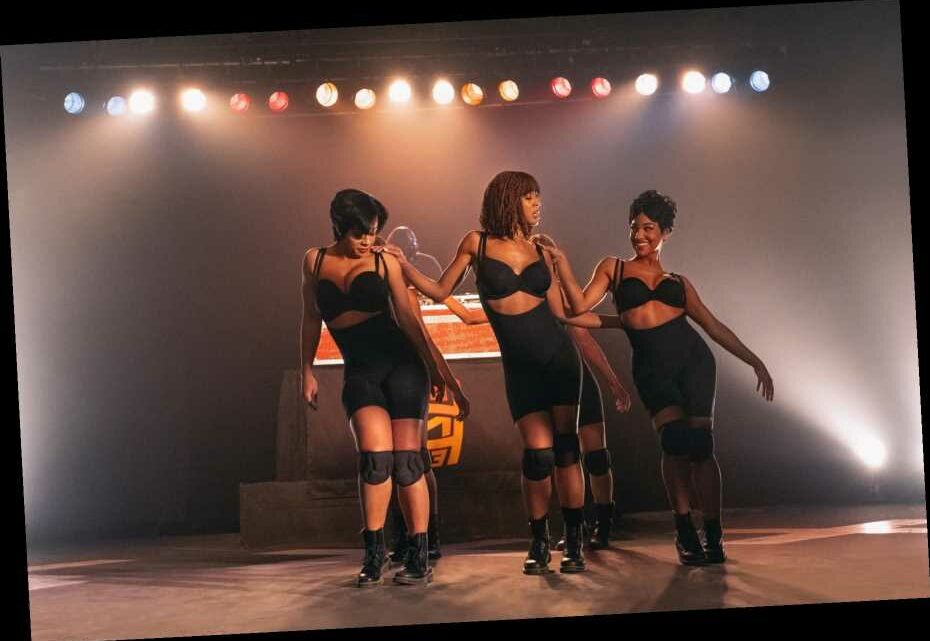 A Lifetime biopic about Salt-N-Pepa? Pick up on this! If you happen to love both Lifetime movies and Eighties rap goddesses, Salt-N-Pepa has everything: Two around-the-way girls meet in school, bond over music, break into the NYC hip-hop game, and blow up into superstars, with hits like “Push It” and “Shoop” and “Let’s Talk About Sex.” Salt-N-Pepa is directed by Mario Van Peebles, who made New Jack City and Posse back in the day, so he gets the Club MTV-era ambience right. This movie ain’t for everybody, only the sexy people.

There’s no other music story like this one. Cheryl “Salt” James (played by G.G. Townson) is the goody-goody church girl from Brooklyn, Sandra “Pepa” Denton (Laila Odom) is the wild thing from Queens, but somehow they click. They were friends first, and you could always hear that in their voices. As Pepa told me in 2017, when I interviewed them backstage at the I Love the Nineties Tour, “We were besties before we were Salt-N-Pepa.”

The biggest challenge for a movie about them is that Salt and Pepa have such larger-than-life personalities, it’s tough for actresses to match that. If you’ve had the pleasure of seeing these legends live, you know they’re still as cool and charismatic as ever. Lifetime is following the bio with a doc that’s just a brief Zoom chat, but it’s even more dramatic than the film. Salt: “I’m just a crier! I’m a crying lady — it’s hard to watch.” Pepa: “I’ve been married three-and-a-half times. I’m Hollywood, honey — I was like Elizabeth Taylor and her husbands!”

'Baby, It's Cold Outside': A Brief History of the Holiday Song Controversy

Salt-N-Pepa have told their tale before — notably in their 2007 VH1 reality show (called, what else, The Salt-N-Pepa Show), where they faced up to their issues, including tension with DJ Spinderella, who never felt accepted as part of the group. At first they were dismissed as a novelty, with street hits like “Tramp” and “My Mike Sounds Nice.” (Early fans loved to flip the “Tramp” 12-inch for the B-side “Idle Chatter,” just 90 seconds of Salt and Pepa in the studio talking shit about their enemies.) But everything changed when “Push It” blew up in 1988, as America’s suburban moms and aerobics teachers spent the summer chanting, “Oooh, baby BAY-bay! B-b-b-BAY-bay!” SNP kept raising the stakes: “Independent” was the first rap hit to claim the word “feminist” as a boast. Yet they fell out and stopped speaking for years, until an onstage reunion in 2005 for the VH1 Hip-Hop Honors.

These two sounded like friends because they were friends, and for better or worse, they couldn’t fake it — when they stopped feeling close, they quit. Neither of them could just treat it like a job the way Run and D.M.C. did. They couldn’t bring the beat back without falling back in love. They’ve kept pushing it and shooping it ever since.

It’s a hip-hip story that’s perfect for a Lifetime melodrama: two women with big dreams, family pressures, men who do them wrong, sisterhood, stardom, lies, betrayal, tears, champagne baths, lessons learned, those moments where you have to put your doubts and fears aside to rock a leather jacket and biker shorts in front of screaming fans and chant, “Push it REAL good!” Here are the 10 moments that make the Salt-N-Pepa movie very necessary.

1. When Salt met Pepa
The ladies meet at Queensbourgh Community College in 1985, playing spades in the lunch room. (When Pepa needs a partner, she calls out, “Hey, light-skin!”) Salt gets Pepa a job working the phones at the local Sears — their office-mates include Kid and Play (Kid’s already got the high-top fade) as well as a guy who wants to be a comedian. Cheryl clucks, “He thinks he’s gonna be the next Richard Pryor.” His name? Martin Lawrence.

2. Let the music play
The MCs team up on the microphone, produced and mentored by Salt’s boyfriend Herbie “Luv Bug” Avor. Salt knows Herbie is her one true love: These two will be 2gether 4ever, and no way he would ever cheat on her with a back-up dancer, a DJ, or any other female characters. Leather varsity jackets? Hoop earrings? Kente hats? Big hair? It’s on.

3. Hard times
Their first lesson in the sleazy side of the rap game: They show up for a gig, but there’s already a fake Salt-N-Pepa onstage, two imposters biting their rhymes. Herbie gets a beatdown behind the club from the shady promoter, who says, “I may not be a West Indian but I’m Indian, brother. Me and my peoples, we from the Slap-a-Ho tribe. Slap this ho!” Brilliant casting move: The imposters are played by Salt and Pepa’s real-life daughters.

4. Spinderella joins the crew
At the time, it was controversial that the DJ Spinderella on “Let’s Talk About Sex” wasn’t the same Spinderella from “I’ll Take Your Man.” You weren’t supposed to just replace your DJ and recycle their handle. But Herbie says, “Group members switch up all the time. Van Halen replaced their lead singer!” The new DJ gets the star treatment — she’s in the videos, on the album covers — but she’s always got beef with the MCs. (We heard a lot about her issues on the VH1 reality show.) Sure enough, after Spinderella gets hired, she’s barely mentioned the rest of the movie.

5. Their first red-carpet moment
How do Salt and Pepa know they’ve finally hit the big time? They get invited to the premiere of Run-D.M.C.’s heavily hyped movie Krush Groove. At the party they meet their heroes like the Fat Boys, but Pepa just wants to mack on LL Cool J. Salt scoffs: “What is he, 17?” Since it’s 1985, the actor playing LL is chatting on an awesome cell phone the size of a mini fridge.

6. The drug scene
Hey, it’s the Eighties. Pepa talks Salt into celebrating their success at a psychedelic rave, where their pastel clothes glow like neon and they roll around the floor feeling trippy. It’s like the “U4EA” episode of Beverly Hills, 90210.

7. Welcome to motherhood
Since this is a Lifetime biopic, the miracle of childbirth requires the two BFFs to have a serious heart-to-heart in the maternity ward. As Pepa suffers her labor pains, she looks deep into Salt’s eyes and says, “Bitch, don’t ever leave me!” Salt promises, “Never.”

8. Arsenio Fever!
Would any movie set in the early 1990s be complete without a pivotal scene on The Arsenio Hall Show? Salt’s man breaks up with her after she commits the unforgivable sin of forgetting to mention him during her Arsenio interview, right before she gives birth. Pepa goes looking for love in all the wrong places — i.e. MTV’s Spring Break in Daytona Beach, where she hooks up with Treach from Naughty By Nature. “‘O.P.P.’, that’s my joint!” she tells him. Unfortunately, both these ladies find the men in their lives can be down with O.P.P.

9. And then they break up
As Salt gets deeper into her church life, she starts to feel unfulfilled. As she says in their fancy hotel suite, “Now our kids are growing up without us and we’re in Russia doing Yo! MTV Raps?” The hits stop coming. (“Five years ago we played Woodstock, now you wanna settle for these little clubs?”) Salt cuts it off with a brutally cold call dumping Pepa. The news gets broken by Wendy Williams.

10. But now it’s time to get the group back together!
It all builds up to their live 2005 reunion for VH1, introduced by Queen Latifah. (In truth, their split was so low-profile, most fans had no idea they’d broken up, much less that they stopped speaking. That’s why the world was so shocked by the 2007 reality show.) Back onstage, Salt and Pepa finally realize they belong together. Friendship triumphs again. Now and forever, Salt and Pepa’s here, in full effect.