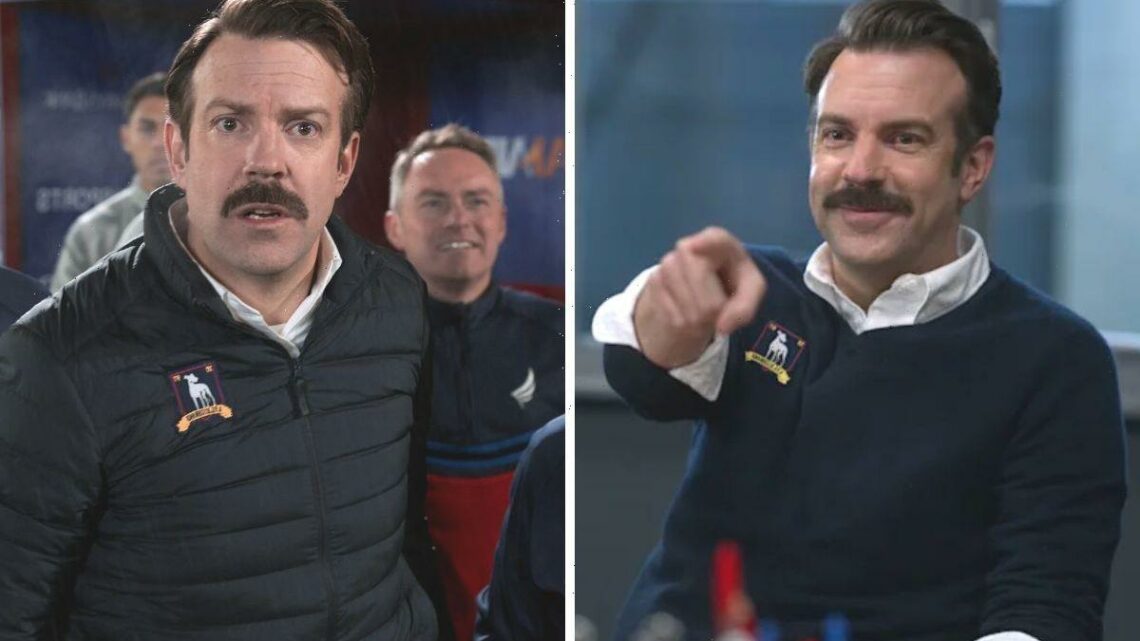 The highly acclaimed Apple TV+ drama Ted Lasso will finally return to screens after securing a string of awards and nominations for its successful second season. Thankfully, bosses confirmed the show would officially return this year as they shared a photo of a tense scene.

Season two came to an end with a gut-wrenching result for the team after assistant coach Nate Shelley (played by Nick Mohammed) leave AFC Richmond to join West Ham.

It looks as though, season three will pick up from the devasting results as the network shared a first-look image, which hinted at a heated discussion.

Ted Lasso (Jason Sudeikis) is pictured standing opposite Nate in what appears to be a tense stand-off, while Rupert Mannion (Anthony Head) watches in the distance.

The network added: “Ted Lasso Season 3 is coming to Apple TV+ this Spring.”

As Nate was feeling unappreciated by Ted, they got into a huge argument, before he stormed off to join AFC Richmond’s rivals.

He displayed his rage by tearing down Ted’s ‘believe’ banner from the wall.

While fans will be thrilled to see the sports drama return to screens, season three was reported to be the show’s final instalment.

“We are writing it like that,” he told The Sunday Times.

Ted Lasso star Jason also spoke on the show’s future, hinting season three could conclude the series, as he said: “I don’t know, it’s up to more factors than myself.

“We have a tremendous group of people in production and post-production. All of those things are thrown into the jambalaya of possibility. So I couldn’t say yes or no,” he added to Variety.

With Nate and Ted’s friendship left uncertain, fans will recall Nate had quite the promotion after starting off as AFC Richmond’s kit man.

Throughout the show, he became Ted’s right-hand man and helped him learn the game.

He eventually became assistant coach and was praised after his false nine strategy helped the team get promoted back to the Premier League at the end of season two.

This revelation will undoubtedly cause a stir with Nate heading to West Ham as the team’s new head coach.

After season two came to an end, Co-creator Brendan Hunt revealed: “We are writing an ending for this three-chunk portion that we’ve always seen, but it’s not like Thanos is in it and half of us die.

“Most of us, anyway, will probably still be alive, so I don’t think leaving an out is anything to worry about.”

Speaking to The Hollywood Reporter, he added: “It’s just a matter of whether or not we pick this up in some other way, and when.”

Regal Cinemas to Shut Down 39 U.S. Theaters Amid Bankruptcy