Think of an undercover cop pretending to be an outlaw in order to find incriminating evidence, or a soldier traveling incognito behind enemy lines during wartime. Now imagine a westernized Syrian filmmaker who identifies as a liberal Muslim going to Syria and embedding with radical Islamists by pretending to be one of them.

That’s what Talal Derki did in order to shoot “Of Fathers and Sons.” And what he documented is unlike anything we’ve ever seen. That’s why the movie, which focused on a jihadist’s family, took home the World Cinema Grand Jury Prize at the Sundance Film Festival, and the Filmmaker Award at the Full Frame Documentary Film Fest, is an Independent Spirit Award nominee, and could wind up on the documentary Oscar shortlist December 17. 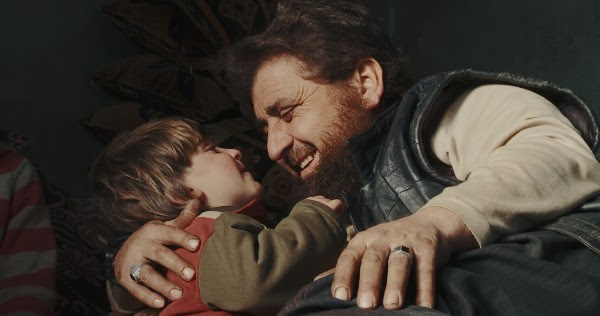 “Of Fathers and Sons”

“I wanted to tell the story from inside the world of Syria,” said Derki in a phone interview from his home in Berlin. “The catastrophe of the mind of the new generation was for me the most important. People around the world know only about the Syrian tragedy. I wished to make a film more about the masculine authority that takes the war in the direction of a more holy war. The film can be connected to people who have no connection to the Syrian War. It can happen anywhere. The rise of extremists, it’s not only religion, it also happens in modern countries like Brazil, Turkey, Russia, and America. It’s everywhere on different levels. All these nations are heading in a bad direction. I’m afraid this thing can go worse than it is now.”

After his 2014 Sundance award-winning documentary “The Return to Homs,” Derki wanted to go back to western Syria; he’d met people who could help him embed with ISIS radicals. He wanted to see up close the process of educating and brainwashing an entire society. “It’s the time to see how they brainwashed the new generation already training to be the upcoming generation of jihad,” he said. “I went to the center area controlled by the Al-Nusra front.”

As his team sought possible subjects, one cameraman found a kid in a Jihadi camp and tracked him back to his father. “He was a totally mad guy with ideology,” said Derki, “the bad Don Quixote with a huge head who believes 100 percent.”

The filmmaker lived with the family for more than two years, filming the ardent jihadist father and his admiring sons: gung-ho jihadist Osama (13), and Ayman (12), who wants more schooling. Filming the women was an absolute red line that Derki’s cameras could not pass. To even suggest it would have revealed his true colors. Except for some young girls — whom the boys threw stones at, because they were in school — all women are kept off-camera, out of frame. When one character is maimed by a land mine, we hear the wailing of his wife. “He tells her to ‘Shut up or I will destroy the whole house above her head’,” said Derki.

Mostly, Derki was in danger “if they figure out that I had a different purpose than making a film about their glory as fighters,” he said. “They did respect me. I was the good student for the father, he was teaching me his methods.”

The worst moment for him as a filmmaker was when he interviewed his subject at the same time that he shot a man on the other side of the front line. “As a filmmaker, as a witness, I don’t have any power to change him or to comment on what is going on the ground,” Derki said. “I was really very broken from inside during my interview as the main character tried to kill another person. He gets injured and he tries to shoot him again, but he couldn’t see him anymore.”

Derki and his cameramen followed their subjects as they walked through mine fields riddled with TNT so strong they could smell it underground. After the film was finished last October, the film’s main subject was killed when he was dismantling a car bomb that exploded in his face. Derki discovered the news on Facebook.

When a Tunisian war criminal responsible for many massacres asked to meet Derki, he knew his time in Syria was up. “Then I understand I should not go back again,” said Derki, who hired a cameraman outside of his team to shoot the last five minutes of the film.

There’s no question Derki is still recovering psychologically. He needs sleep aids. “Most of my dreams are bad.” He made the decision: “I will not lose my head until the film is finished.” He understood that he could not recognize the danger while he was there. “They still can hunt you,” he said. “I have received many online threats.”

All sides in Syria are furious with the film, and the people with whom he embedded are prepared to wreak revenge for his betrayal. “I will not go back there,” he said. “Those two films are enough for me,” he said. “Maybe in the future after the war, I could find access in a different way.” He’s interested in how to subvert societies to support Muslim women. “We have to fight. It’s a long war between open-mindedness and conservative extremists.”

'We are not prepared to die,' says Maldives as small island states pile on pressure at UN climate talks
World News