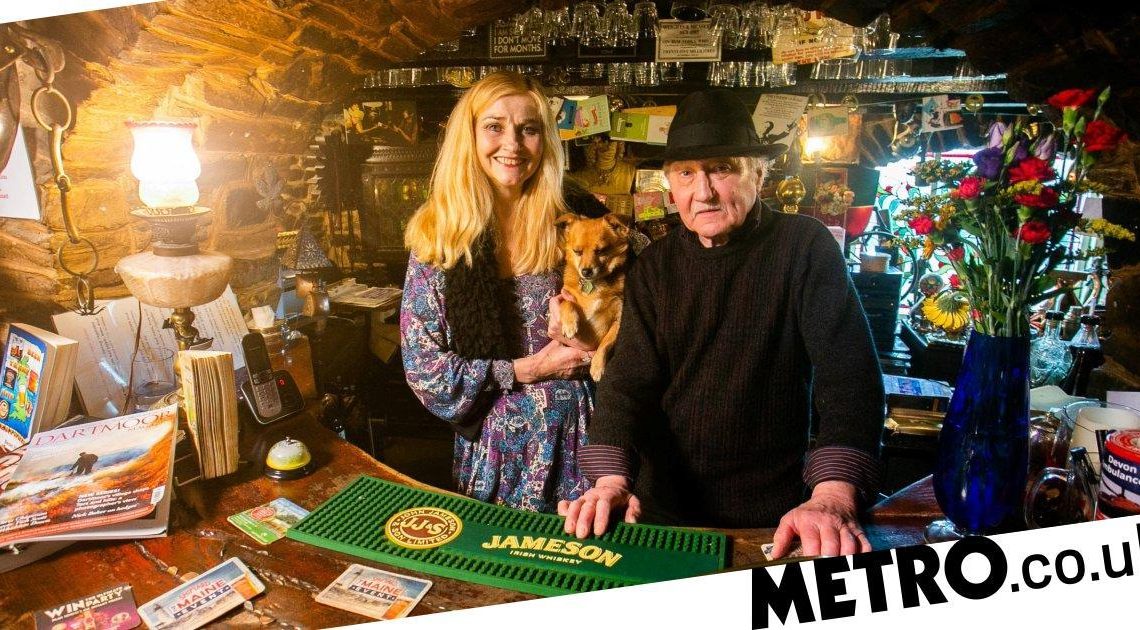 Take a look inside Britain's 'most unusual pub'

Sally Thomson, 64, inherited the business, set in a 11th century building, from her father Buster, who had initially bought the watering hole in Sourton, Devon, in 1959.

He had spent years decorating the pub in his own unique Gothic fashion.

The pub’s two counters are made from part of a tree from local woodland which took seven hours to cut into two.

They were paid in beer and Sally says you can tell which end was the one they cut last because it is a bit ‘squiffy’ due to the effects of all the alcohol.

Other items in the pub include a crystal tree, a Tutankhamun statue, cartwheels, lanterns, and a bellow acquired from a blacksmith which has been turned into a table.

Sally said: ‘It’s the most unusual pub in the UK, it’s very surreal. It’s unique, you have to see it to believe it, really.

‘It’s an old building to begin with, my father had been working here since 1959 and finished in 1999.

‘He worked ceaselessly and it’s filled with his Gothic imagination.

‘There are stone walls and big doors that open on to parlours, one of which has a sailing galleon, in that room there is a sea monster that sways towards you.

‘There are other doors towards other rooms, each filled with things – one has a 6ft minotaur inside.’

Sally says that when people visit the pub, they comment on how ‘odd’ it is.

She currently serves customers alongside her 75-year-old husband Bruce, from behind an odd-shaped bar.

She added: ‘It was quite small and wasn’t what it looks like today. It had been modernised by Plymouth Breweries but wasn’t making much money.

‘My father uncovered the original stonework and beams which had been hidden.

‘They wanted to get people to come here so he started making it look a bit different and he got completely carried away.

‘He had a very Gothic imagination and used to stockpile artefacts.

‘They had lots of fun doing it; the locals still think we’re potty.

‘I love it, we never really own anything in life, I’m merely a custodian.

‘I do enjoy it, I like people; they can be ghastly but they can also be fantastic. There’s also not many jobs where you get paid to have a drink and a laugh.

‘I have tried to keep the essence of the pub the same.’

MORE: A property next to the royal family’s estate is on the market for £750,000

The daily lifestyle email from Metro.co.uk.