ITV has defended Phillip Schofield and Holly Willoughby in recent days after the This Morning pair were pictured visiting the Queen laying in state in a “professional capacity”. The duo sparked uproar and even calls to be “sacked” by some members of the public after people had queued for hours on end to pay their own respects. Holly and Phillip’s ITV colleague Susanna Reid was just one of the thousands to take the time to queue up to say farewell and she touched upon the “privilege” on Monday’s Good Morning Britain.

“It is an enormous privilege to have been able to have done that,” Susanna told co-host, Ben Shephard, on Monday morning as they watched pictures of the final people witnessing the Queen lying in state.

She continued: “To spend time paying our last respects but also those hours in the queue that are coming to an end now.

“You can see the emotion etched on people’s faces, I think almost the fact that they are last in the queue…”

“It’s going to resonate further, isn’t it?” Ben chipped in as Susanna agreed: “Isn’t it just.” 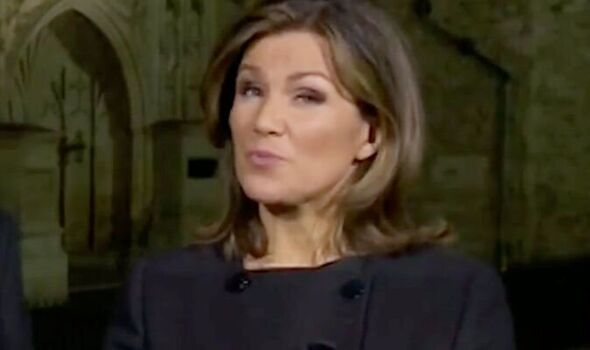 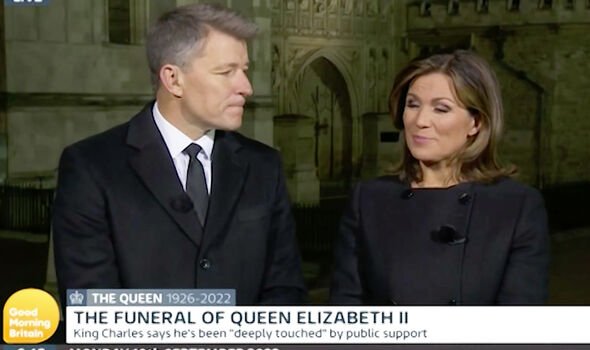 Ben then shared his own thoughts on the process, commenting: “But it is a huge commitment.

“And we’ve had that over and over again from these people that have met like-minded people that they just wanted to feel connected to in the queue.

“And when you do anything like that, an endeavour, because it really is an endeavour to stay there for that long for this moment, you can understand why for some they are overwhelmed with emotion.” 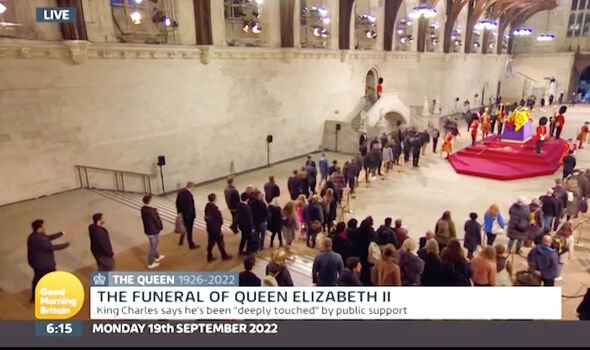 Susanna agreed and replied: “Whether you are religious or not, whether you are a royalist or not it feels like a sort of pilgrimage.”

A number of other famous faces decided they would take on the lengthy queue in order to pay their respects in the past few days, including David Beckham.

However, This Morning’s Holly and Phillip were pictured paying their own respects after receiving accreditation from ITV to attend

ITV defended this amid public uproar, however, with a spokesperson saying in a statement: “This Morning had press accreditation and like other media, Phillip and Holly were escorted to work from the press gallery by government staff.

“They did not file past The Queen’s coffin. They were there alongside a host of other broadcasters and national press outlets for an item that will be broadcast on Tuesday’s show.

“Any allegations of improper behaviour are categorically untrue.”

And This Morning shared another statement of its own via Instagram clarifying its hosts’ appearance.

It read: “Hello everyone, we would like to clarify something. We asked Phillip and Holly to be part of a film for this Tuesday’s programme.

“They did not jump the queue, have VIP access or file past the Queen lying in state – but instead were there in a professional capacity as part of the world’s media to report on the event.”

Good Morning Britain airs weekdays at 9am on ITV.