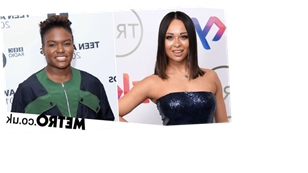 Strictly Come Dancing’s Katya Jones is said to be hopeful to be paired up with Nicola Adams this year in the show’s first ever same-sex couple.

The 2020 series is set to make history after the Olympic gold medalist requested to be paired up with a female dancer.

And it looks as though Katya is keen to snatch up the opportunity and redeem herself following her 2018 cheating scandal – where she kissed her celebrity partner Seann Walsh despite being married to her fellow pro Neil Jones at the time.

‘Katya has been telling everyone on the show how keen she is to be paired with Nicola,’ a source recently told The Sun. ‘She’s a huge believer in girl power and thinks they’d make a great team and be a hit with the viewers at home.

‘She sees it as a chance to make history but also to redeem herself on the show after her scandal two years ago.’

They pressed: ‘She’s a real girls’ girl and is keen to move on from that. Equally, show bosses know that Katya will have everyone talking about her and Nicola if they partner them together.’

This isn’t the first time Katya has opened up about Strictly’s groundbreaking move, as she previously explained to the Sunday Mirror how she would love a female partner.

‘I would love to dance with a woman on the show,’ the star said when asked about her views on the decision.

‘I think creatively it would be really ­interesting, and I love coming up with new ideas for stuff. So on that side I think it would be quite interesting.’

Nicola, who has been praised as an LGBTQIA+ role model, revealed the news just last week when making an appearance on BBC Breakfast.

‘I have told probably three people, so not that many people knew I was going to be in this,’ the boxer confessed. ‘I was keeping it a secret.

‘It’s really important. It’s a big step for the show and it’s nice to see that we are able to move on. I just can’t wait to get some dancing done.’

Asked about whether she approached the show on being part of a same-sex pairing, Nicola explained: ‘I asked the show about it.

‘They wanted to know if I wanted to be on the show but I said, “Yeah, I will do it but I want to dance with another female dance partner.”

Metro.co.uk has reached out to the BBC and Katya’s reps for further comment while Strictly Come Dancing will air on BBC One later this year.