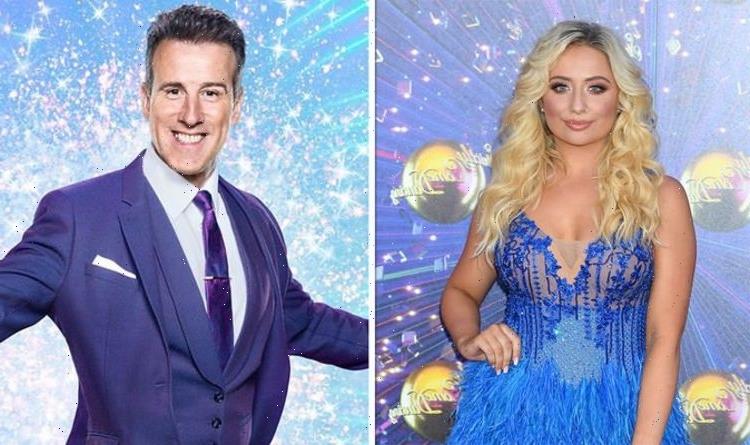 YouTube star Saffron Barker was a hit during her time on Strictly Come Dancing and was partnered with professional dancer AJ Pritchard. As the new series returns next weekend to BBC One, viewers are clamouring for information about this year’s line-up. Saffron has offered her predictions for the final, as well as her thoughts on Anton du Beke returning as a judge. The social media personality is also working on a clothing collection with In The Style and planning a run a marathon for charity. In an exclusive interview with Express.co.uk, Saffron details her time on Strictly and her busy year ahead.

Speaking to Express.co.uk, Saffron revealed her thoughts on Anton once again acting as a judge in place of Bruno Tonioli.

“So I’m so here for him being a judge,” the YouTuber continued.

“The reason he stayed on the show so long is to be a judge and I feel like now was his time,” Saffron explained.

However, the star expressed sadness Bruno Tonioli was unable to return to judging for a second year in a row but was unsurprised when Anton was chosen as the temporary replacement as he fit right in.

“He has so much knowledge about dance and I feel like he really deserves it.

“It’s something Anton is super passionate about and I feel like he is a really good judge.”

Saffron also praised Anton for being incredibly welcoming towards her and described him as the “kindest person from the minute I met him”.

As a former Strictly contestant who knows the ins and outs of the series, as well as the training, Saffron shared her predictions for this year’s line-up.

“There is always a dark horse. I feel like maybe Tom Fletcher could be really good and I think he’ll be quite surprising. I feel like he will make it very far.”

Though the former dancer was quick to predict that “Tom will make it to the final”.

The line-up this year has got the YouTuber extremely excited, noting the variety of celebrities is what makes her love the series so much.

“I love the fact they’re bringing more young people to the show like Tilly [Ramsay]. I’m really, really excited for her.”

Aside from waiting for the dance show to return, Saffron has an extremely busy year ahead as she recently collaborated again with In The Style for a summer collection, a project she always dreamed of doing.

“I always wanted to put out my own clothing collection because I’m obsessed with fashion, and absolutely love it.

“I had quite a few brands approach me to do clothing collections but when In The Style approached me, they said you can have 100 percent say on absolutely everything.”

She explained how it was important to create clothes she would actually wear rather than try to tailor them to a specific audience.

“But, at the same time, if someone sees me absolutely loving what I’m wearing, they’re probably more likely to wear it themselves.”

The YouTuber also teased fans by revealing she had just shot the campaign for her Autumn collection, which will drop later in the year.

But Saffron is not stopping there as she is also renovating her house and running a marathon for the Make A Wish Foundation.

Her personal connection with the foundation was the main reason for Saffron saying yes as she had granted several wishes in the past to terminally ill children.

“When you’re running for such an amazing charity, you want to be able to do it for them. So I know that I will do it.”

Strictly Come Dancing will air on September 18 on BBC One.

The full Saffron Barker x In The Style collection is available at www.inthestyle.com.