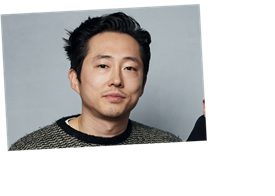 On the heels of yesterday’s historic Oscar nomination for Steven Yeun comes news from Deadline that he is planning his return to television for a 10-episode half-hour series opposite comedian Ali Wong. The television project, Yeun’s first TV gig since wrapping his run as Glenn Rhee on “The Walking Dead,” is backed by A24, the distributor of Yeun’s six-time Oscar nominee, “Minari.” Per Deadline, the Yeun-Wong series was “pitched last week” and “has created an auction frenzy with the usual suspects — Netflix, Amazon, FX and Apple among them — all in the mix.”

Plot details about the series are remaining under wraps, but Deadline adds: “Wong and Yeun are executive producers. The creator/writer/showrunner of the limited series is Lee Sung Jin. They are keeping the logline under wraps for the moment, but this isn’t going to take long to land, and it will be 10 episodes, 30 minutes in length.”

Yeun broke out on television with his “Walking Dead” role before making a name for himself in movies with the likes of Bong Joon Ho’s “Okja” and Lee Chang-dong’s “Burning,” the latter of which won the him the Best Supporting Actor prize from the Los Angeles Film Critics Association. Yeun’s career has reached a new peak with the release of Lee Isaac Chung’s “Minari,” for which Yeun is now the first Asian-American Best Actor nominee in the 93-year history of the Academy Awards. “Minari” is nominated for a total of six Oscars, including Best Picture, Best Director, Best Original Screenplay, Best Original Score, and Best Supporting Actress for Youn Yuh-jung.

Although Yeun missed out on nominations at the Golden Globes and BAFTA Awards for “Minari,” he made the cut with the Screens Actors Guild. Yeun is nominated for the Best Actor Oscar alongside Riz Ahmed for “Sound of Metal,” Chadwick Boseman for “Ma Rainey’s Black Bottom,” Anthony Hopkins for “The Father,” and Gary Oldman for “Mank.”

As for Ali Wong, the comedian is a Netflix favorite thanks to her stand-up specials and the romantic-comedy movie “Always Be My Maybe.” Wong’s television credits include the ABC sitcom “American Housewife,” and she also appeared in the superhero tentpole “Birds of Prey.”