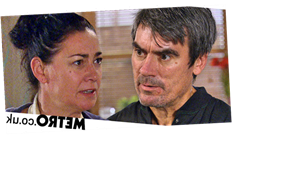 Spoilers: Shock reunion for Cain and Moira in Emmerdale?

Cain Dingle (Jeff Hordley) is determined to get revenge on behalf of Moira (Natalie J Robb) in Emmerdale when he discovers the truth about the hit and run, but will his commitment to her result in them putting the past behind them and getting back together?

Cain has been by Moira’s side every step of the way since her accident, and he even admitted when by her bedside that he feared losing her.

However, he ultimately got scared of how close they were becoming and headed off to Scotland, before returning to assist her once more.

In the coming episodes, Andrea (Anna Nightingale) reveals to Moira that it was Jamie who left her for dead, and Belle (Eden Taylor-Draper) pretends this is the first she’s heard of it.

However, Moira and Cain doubt her honesty, and it’s safe to say the latter is fuming upon learning that Jamie is to blame for Moira’s accident.

Dermerined to get revenge, he sets off in pursuit of Jamie and Belle — with a bat in hand.

At another point throughout the week in question, Cain reaches out to Moira, but will she accept his olive branch?

With emotions running high, and Cain on a mission to get revenge on behalf of Moira, one can’t help but wonder if the pair will rekindle their romance as a result?

Coud Cain and Moria finally get back together?

Will Cain be able to forgive her for Nate (Jurell Carter)?