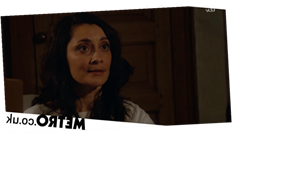 Disaster struck for Rishi Sharma (Bhasker Patel) in Emmerdale this evening when he learned that he could face prosecution over what happened to Manpreet’s (Rebecca Sarker) patient, Derek. However, after she demonstrated a few questionable actions, the biggest question viewers no doubt found themselves asking is: what is Manpreet up to?

With news of Derek’s death spreading throughout the village, tensions were certainly running high during tonight’s episode. Convinced that everything that transpired is down to him, Rishi couldn’t stop himself from feeling guilty, but Manpreet and Jai (Chris Bisson) were quick to dispel such claims — telling him to wait until they know more.

However, the environmental health were later notified, and — if that wasn’t a hard enough pill for the Sharma clan to swallow — the real kick came later, when they found out that it was Manpreet who reported Rishi.

Later a man from the environmental health paid them a visit to take some samples, and stated that Rishi could face prosecution for manslaughter if their findings turn anything up.

Meanwhile, Jai and Priya (Fiona Wade) made their intentions clear, as they aimed to get their dad the best lawyer going — but Rishi was quick to remind them that they’ll be unable to do so considering the family currently has next to no money.

With Derek’s stamp collection in her possession, Manpreet proceeded to usher her hubby away from the laptop, so that she could try and find out how much such an item would be worth.

The question is: what is Manpreet up to?

Is she showing her true colours by trying to capitalise on Derek’s death — and her husband’s misfortunes?

Or is she simply trying to find Rishi the funds he needs for a top lawyer?

Emmerdale continues on Wednesday 2nd October at 7pm on ITV.