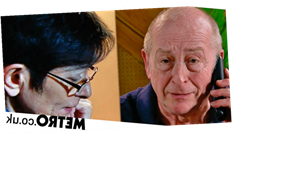 Spoilers: Corrie's Geoff apologises for abuse — will Yasmeen take him back?

Geoff Metcalfe (Ian Bartholomew) apologised for abusing Yasmeen Nazir (Shelley King) in Coronation Street in a bid to win her back, but will he succeed in doing so?

Geoff was worried about what may or may not be exposed about him during a trial, and with Sally (Sally Dynevor) on Yasmeen’s side, he decided to manipulate the situation to his advantage once again.

Yes, he stole Alya’s (Sair Khan) phone and intercepted a call with Yasmeen in the hopes of convincing her to return home as his wife.

In an effort to manipulate further, he attempted to have the charges against her dropped, which — if he’s successful — could mean that the trial won’t go ahead, which is something Yasmeen is seemingly hoping for.

During tonight’s episode, Yasmeen’s pal acquired her a secret phone, and she rang Geoff in an effort to find out what he was up to.

She bravely stood up to him, and refused to allow him to spin her any more lies, but the master manipulator told her exactly what she wanted to hear — promising to get help.

He claimed that Yasmeen being behind bars has shown him the error of his ways, and therefore he’s sorry for not being the man she deserved.

Yasmeen was incredibly confused, as she was forced to hang up due to an approaching prison guard, but has Geoff successfully manipulated her once more?

Will she return home and take him back?

Or is she fully aware of what he’s up to?

James Bond movies in order of release – from Dr. No to No Time To Die