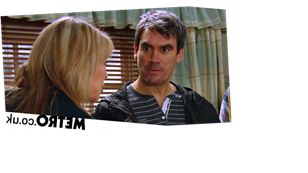 Kim Tate (Claire King) has seemingly made an enemy out of Cain Dingle (Jeff Hordley) in Emmerdale after she threatened to destroy Butlers farm.

With Moira (Natalie J Robb) in a bad way following the hit and run, Cain headed up to the farm to see how things were going in her absence.

However, upon his arrival, he walked in on Rhona (Zoe Henry) discussing her partnership with Nate (Jurrell Carter).

Rhona attempted to explain herself — revealing that her intentions were only ever good and that she didn’t want to hurt Moira.

Cain seemingly believed her, and ultimately decided that Moira didn’t need any unnecessary stress, and therefore resolved to keep their secret hidden.

However, things became somewhat complicated when Kim showed up — as she had also learned of Nate’s alliance with Rhona.

Believing the farmhand to be conspiring behind her back, she swore revenge, as she resolved to bankrupt Butlers.

Cain didn’t say anything, but his face did all the talking, as he was naturally appalled by her intentions.

In tonight’s episode, Nate and Rhona take it upon themselves to try and amend the situation by calming Cain down following Kim’s threat.

The question is: will they succeed?

Or will Cain do whatever he deems necessary to protect his wife’s farm?