Home » TV & Movies » ‘Spider-Man: Into The Spider-Verse’ And ‘The Incredibles 2’ Offer Animated Argument For Super-Heroes 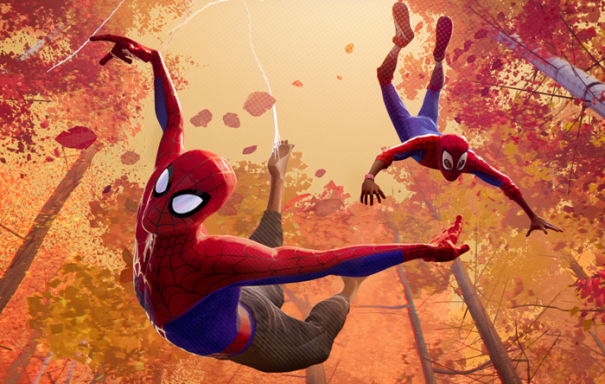 ‘Spider-Man: Into The Spider-Verse’ And ‘The Incredibles 2’ Offer Animated Argument For Super-Heroes

It’s hard to think that any superhero film could qualify as a Hollywood rarity these days but Spider-Man: Into the Spider-Verse is just that. As an animated big-screen adaptation of a comic book superhero the Sony film is on a surprisingly short list.

On Thursday the film’s three directors — Bob Persichetti, Peter Ramsey and Rodney Rothman –were celebrating their shared nomination in the best animated feature film category for the 76th Golden Globe Awards. The competition in the category includes Brad Bird and his The Incredibles 2 from the Pixar superhero franchise that took its inspiration from comic books but not any of its characters.

It’s not nearly as easy to rattle off animated adaptations of comic book superheroes that have reached the big screen in wide release. There was Batman: Mask of the Phantasm (1993), TMNT (2007), Astro Boy (2009) and the Oscar-winning Big Hero Six (2017). DC Comics characters were also featured in parody form in the toy-based films The Lego Movie (2014) and The Batman Lego Movie (2017).

This year two new entries joined the list of animated adaptations of super-hero comics: Teen Titans Go! To The Movies opened in July (which technically adapts the anime-informed TV cartoon series that in turn features comic book characters) and Spider-Verse, which gets wide release on Dec. 14.

That lack of history was one of the many challenges facing the Spider-Verse project, which also flies in the face of recent CG animation aesthetics with its hand-drawn style, hip-hop sensibility and maverick mindset.

“We ran into that so many times during this project,” Persichetti said. “People would say, ‘It’s animated? Well, who’s it for?’ We were making something that looked and felt so contemporary that there was initially some concern from a lot of people that we were going to isolate the family audience.”

Instead of comics adaptations, the most popular screen versions of animated superheroes have featured native creations of the medium: The Incredibles (2004) and Megamind (2010), for instance.

There are a number of close genre-relatives of super-heroes in animation features, such as Bird’s original-to-film classic The Iron Giant (1999);  Ramsey’s Rise of the Guardians (2012), which adapted a children’s storybook series; or The Powerpuff Girls Movie (2002), which hailed from television.

“The first Incredibles is the one that sticks out to everyone, it was that moment were superhero stories and feature animation came together in a really fantastic way,” Persichetti said. “My theory is that Sam Raimi and those early Spider-Man movies were so good at what would be considered ‘family fare’ that it locked in the perception of how these movies should be done.”

The template was so strongly set that the Spider-Verse team faced doubts of their own on the project. A sequel is likely on the way now that the film is winning major acclaim as is a Spider-Women project, as Deadline reported last week.

“We had this mandate to basically challenge how animated movies are made and what they can be, from top to bottom,” Rothman said. “There were large periods of time where we wondered if it would even work.”

It’s hard to envision after the success of Incredibles 2 (which finished north of $1.2 billion in global box office) but similar doubts and doubters dogged Bird when he was working on the first Incredibles film. On Thursday, Bird recounted that Pixar boss Steve Jobs fretted that masked men in cartoons might never get respect from anyone who had ever watched Saturday morning cartoons like The Super-Friends or Spider-Man and His Amazing Friends.

“At the time, Steve was worried that people’s associations with the combination of superheroes and animation were all negative,” Bird said. “People had it in their mind that it would be cheap and it would be crummy because at the time maybe 99.9 percent of the superhero animation was done very quickly and on really low budgets for Saturday morning television.”

Bird countered the concerns expressed by Jobs by offering a history lesson. He pointed to the 1941 screen debut of Superman, which came in animated form and showed what the medium was capable of doing for the caped crowd.

“But what very few people remember is that the very first iteration of superheroes on film was the Fleischer Superman cartoons in the early 1940s and the best of them hold up very well. Being an animation nut I knew those cartoons were a great argument for superhero animation because they were not produced cheaply and they were done very well. The films are wonderfully designed and the shots are beautifully composed. I knew a feature length film done with that approach could be captivating.”

Is this the future of black market boob jobs? Women are opting for 'risky' fat injections to boost busts
World News